Woo-hoo! I've got my first ever tag from another blogger - thanks Amy!

So here, as requested, are 7 facts about me:

1. I'm a terrible swimmer. I love being in the water, but I hate putting my head under, which means that the only stroke I can manage is doggy paddle. I hope I'll get over my fear one of these days.

2. I'm a bad loser. Pete loves board games, so we play quite a lot, and I hate to admit it, but I don't really enjoy it if I'm losing. It just makes me cross.

3. I'm a good teacher. I fell into teaching English as a Foreign Language after university, but in 2004 I did a Diploma in teaching adults and I got a distinction in all 3 parts - exam, teaching and extended assignment. I was only the 3rd person worldwide to get a 'triple distinction'!

4. I'm allergic to nuts. I found this out when I was 19 and ate a whole brazil nut. Within a few minutes I couldn't breathe and was rushed to hospital. I have an injection to carry around with me (but generally I find it easier just to not eat nuts).

5. I've kept a list of every book I've read since 1997. I write down the start and finish date, and give each one a mark out of 5! I don't really know why I do it, other than to remind me of books I've forgotten.

6. The best holiday I've ever had was our honeymoon in 2008. We went to New York for 5 days. It totally lived up to its rave reviews and I'd love to go back one day.

7. Robbie is a kind, sweet-natured, happy boy, and a protective big brother. Emma is a stroppy, stubborn little madam. Guess which one takes after me? Luckily she's also funny, intelligent and it's a constant source of amazement that I ended up with two such incredible kids... 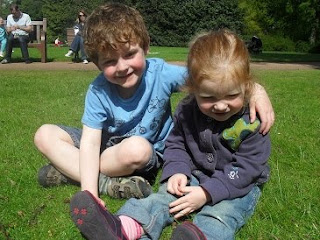 I'm reposting this as some people have had trouble reading it...

At the start of this year I was toying with the idea of doing a marathon before my 40th birthday (December 2012). In February, I heard about someone who had a place at Edinburgh but wanted to transfer it. I realised that if I didn't take this chance, I might never do it. So I signed up.

I only had 14 weeks to train, but before I could launch myself into a training plan, I got an injury which limited my mileage for about 3 weeks. Once that had improved, I got through some good long runs and a taper, before finding myself at the start line on 23rd May.

I had put my predicted time at 4h50m, and I definitely wanted to get under 5 hours, and preferably run the whole thing. As far as strategy goes, I wanted to pace myself and not go off too fast. My longest training runs had been 20 miles, so after that, I had no idea what might happen. I lined up in the purple group (the last group of all!) at 10am and we were off. The people around me started jogging before we reached the start line, so I did too, but I was thinking 'this bit doesn't even count!'

The first couple of miles were downhill, and I knew I was going a bit too fast. I tried to slow myself down a few times with little success - the first 3 miles were all well under 10 min/mile pace. The weather forecast had been confused - some predictions were for heavy rain or showers, but in fact there was not a drop of rain. It was scorching! The route along the seafront was quite pleasant, and there were a lot of supporters cheering us on. At about 6 miles, a man called out 'Come on Liz', which was the first time someone had read my name off my t-shirt! That happened a lot more later in the race, and was a real boost each time.

Miles 5-12 were at a fairly good place of around 10.30m/m, and I was feeling comfortable. Just before 13 miles, I saw my 'support crew' of Mum, Dad, Pete and the kids, which gave me a big lift. Mum said afterwards she couldn't believe how good I looked after 2 hours of running! I was feeling fine at that point. 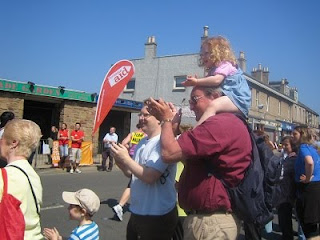 I kept taking sips of lucozade and water, and had a few jelly babies. I felt thirsty the whole time, so kept trying to drink more water, but then that gave me a stitch.

Around 14-15 miles, we saw the leaders coming back towards the finish. They ran past us and they looked all hot and sweaty too! There was a great atmosphere as we slow-coaches cheered them on.

As we headed out of Edinburgh, we got to a turning where we had to run up a road, round a cone and back down again. I found this bit really hard as I was expecting it to be much shorter! Halfway up there though, I saw my support team again, which was great. They seemed to be enjoying the sun, unlike us poor runners. After the turn I came back and saw them again. Just after that I turned a corner and started to walk for the first time. 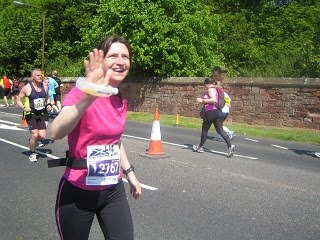 This was not my plan! I had run 20 miles 3 times in training, so I knew I could run at least that far. But I had never run in this sort of heat and I felt so dehydrated. I started to worry about heatstroke and resolved to drink more water. I couldn't remember where any of the drink stations were though, so I just had to wait for each one.

I picked myself up and jogged slowly to the end of the outward route and started to head back towards the finish. It was tough to keep running as almost everyone around me seemed to be walking now. Got to 19 miles and saw my family for the last time on the route. I high-fived the kids and tried to look fresh although I felt far from it. Pete jogged along with me for a minute, and I told him I was struggling. He said I looked great - haha!

From then on it got harder and harder. I was already disappointed that I had been walking before the 20-mile marker, and I was getting fed up that my Garmin was always about 0.2 miles ahead of the mile markers. I remembered hearing that if you walked, you shouldn't just walk aimlessly, but have a plan to get going again, so at that point I decided to walk the first 0.3 of each mile, then try to run the rest. I did that for the next 6 miles.

I saw my friend Amanda around 21 miles luckily I was running (-ish) at that point! It was great to see another supportive face before heading to the final stretch. those last miles were scalding hot and there was absolutely no shade. Thank God for all the kind spectators who sprayed their hoses on us - you were invaluable! Every time I walked my body felt more painful, but when I started running I just wanted to stop. There was no escape!

Then my Garmin read 26 miles - I looked ahead and the 26 mile marker was way in the distance. This moment almost killed me! I stopped running and almost sobbed 'I've run 26 miles already, why is this happening?'! It was hard to take.

Eventually I saw the finish. I started to jog, and gradually increased my speed as I approached. I knew I was very close to 5 hours and just wanted to beat it if I could. As I crossed the line the Garmin read 4h59m, and I later got a confirmed chip time of 4h59m25s - made it!!

I staggered out and wandered round until I met up with my family, and finally collapsed in a sweaty sunburnt heap on the grass. I was just so glad to have stopped! 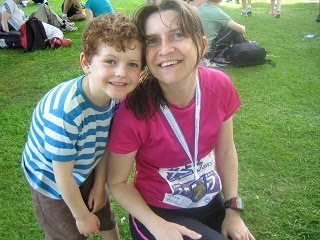 Not so good
I'm a bit disappointed with my time. I'd have preferred 4h45m.
I'd wanted to run the whole thing. I'm cross that I walked so early.
I probably could have been tougher in the last 6 miles. My mental state let me down!

Good
I finished a marathon without any major damage!
I have a time to beat next year.
I know I could do better in cooler weather and with better training.
Overall I really enjoyed the whole experience and can imagine doing it again!