November Rundown and a Magic Bunny

Weeellllll, November's running wasn't AMAZING, but at least it was an improvement on a sorry injured October. My ankle injury meant I'd only managed 2 runs of about 6 miles that month, and in November I kept building up the runs, slowly but surely.

So I've been sticking to short distances but increasing the amount of runs. My ankle still bothers me occasionally, so I'm not overdoing in, and besides, with work, kids and moving house, I haven't got the time for any real long runs at the moment.

Last Saturday we had a pretty good parkrun-day. Emma had been chosen as her class 'Star of the week' - for 'perfect behaviour and great maths'! This meant that she got to bring a toy bunny home for the week, and was expected to keep a diary of fun activities we'd done with 'Magic Bunny' over the week.

Here she is reading him a bedtime story for example... 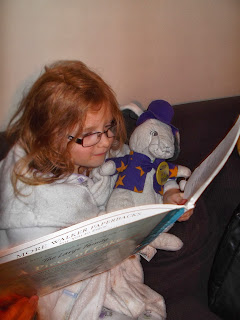 Naturally on Saturday, we had to take Magic Bunny along to a parkrun. We posed with him before the run, and then Pete had the bright idea that Robbie and I should take Magic Bunny with us on the run. 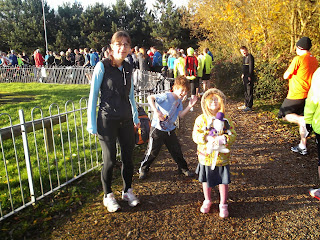 So I ran round with Magic Bunny in my hand. He actually turned out to be rather helpful as whenever Robbie was flagging, I told him that the Bunny was going to overtake, and put him by Robbie's shoulder. That made Robbie sprint off for a bit!

He had lots of little surges of speed, then he would say he was tired. Another of Magic Bunny's tricks was to put a spell on Robbie's legs to keep him going. This also worked! 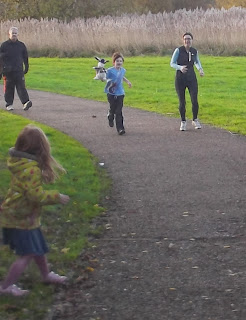 As we approached the finish, Robbie took Magic Bunny, and for once, Robbie didn't manage to sprint fo the line. In fact he had really pushed himself during the run - he ran 32m22s, which was a massive 52-SECOND PB!!! 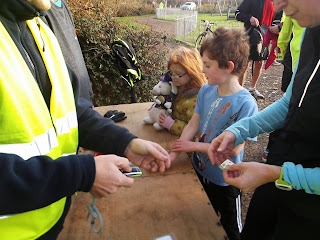 Clearly we could do with Magic Bunny's spells to help us every week...
Posted by Liz at 21:12 3 comments: