So after years of resisting, this year Pete finally joined in with running, increased his swimming, began cycling and entered his first triathlon. After a few months of hard training and the loss of several pounds in weight, the date finally arrived - 13th July - and it was triathlon time!

While he had a few nerves and wondered whether he might actually finish dead last, I enjoyed the more relaxing feeling of being the spectator for a change.

A few days earlier, the kids and I got kitted up with some big paper and thick pens, and they designed their own motivational messages.

We all drove to Bexhill (along with the bike) on the Sunday morning, in plenty of time for Pete to check in and leave his bike in transition. 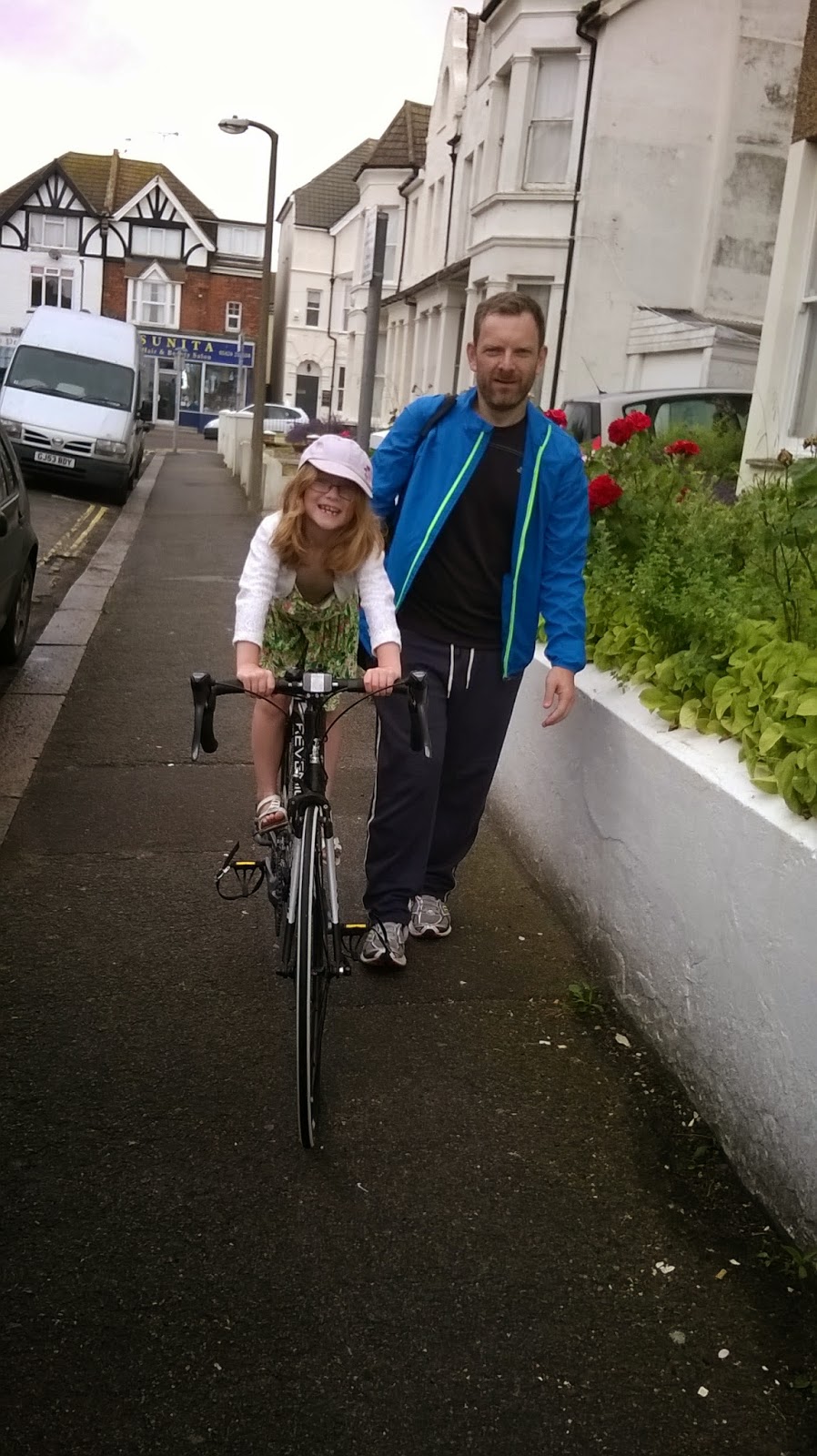 Then it was rather a nervous long wait while other races started, and Pete's wave was the last to enter the sea for the swim. Eventually it was time for his briefing, and then they were off! 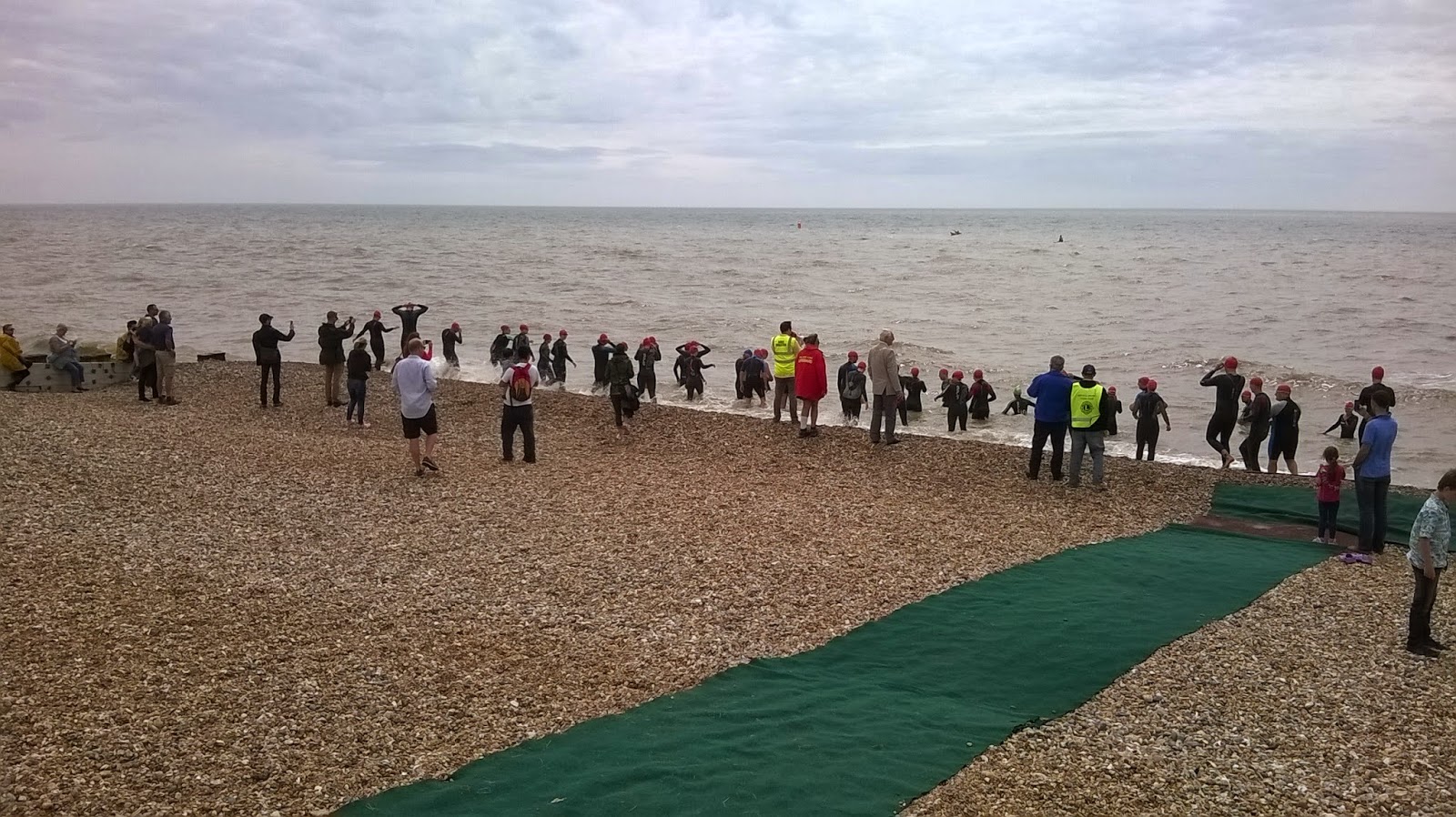 As he swam off, the kids and I popped in to a seafront cafe for a quick refreshment - it was past time for my usual morning coffee - and we sat down with drinks and cakes. 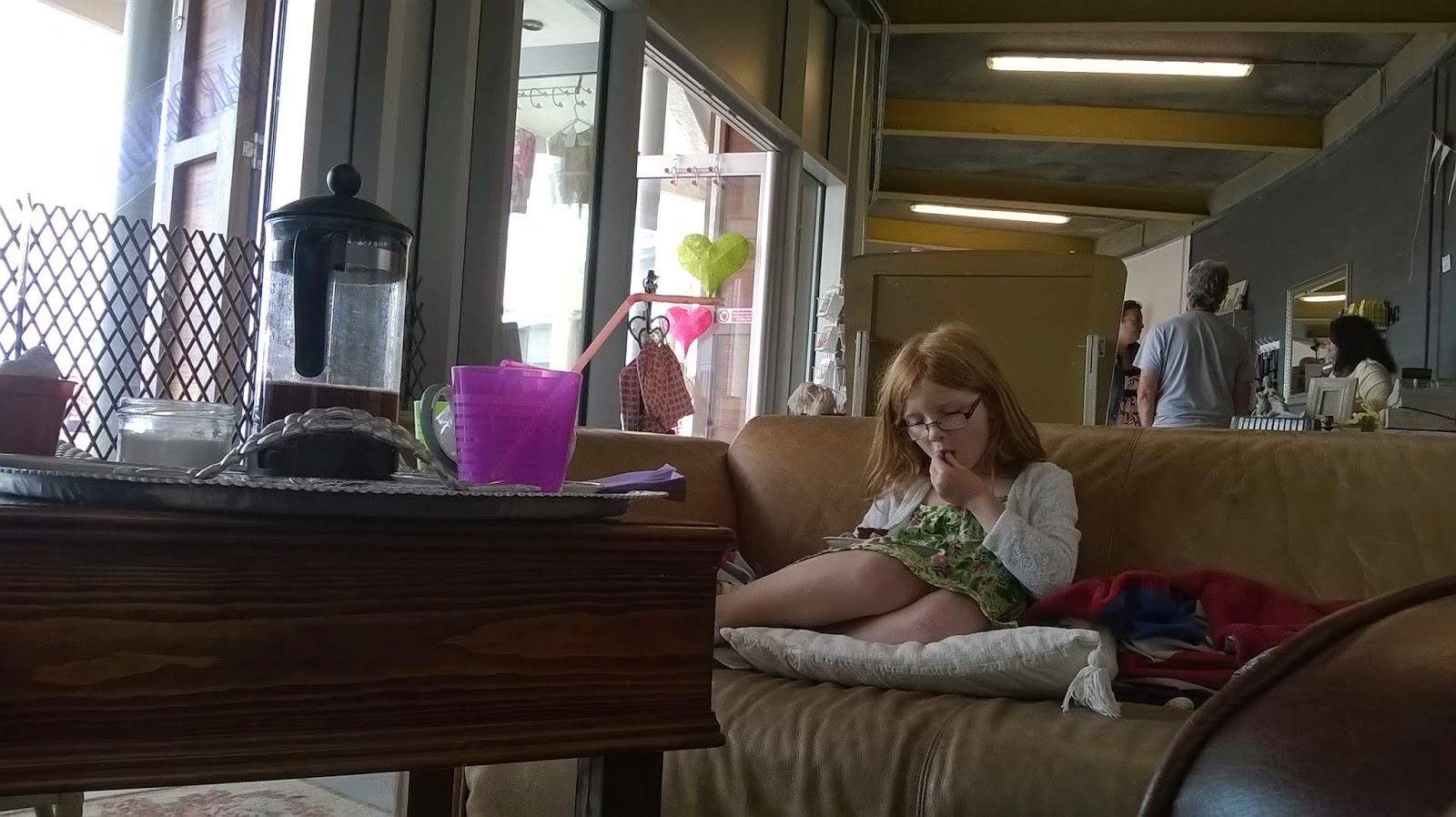 But I kept anxiously glancing out of the window, and realised the first swimmers were quicker than I had thought. We ate up and drank up quickly, and got to the beach just a few minutes before Pete came out of the water - he was in the first few swimmers, doing much better than we had imagined! 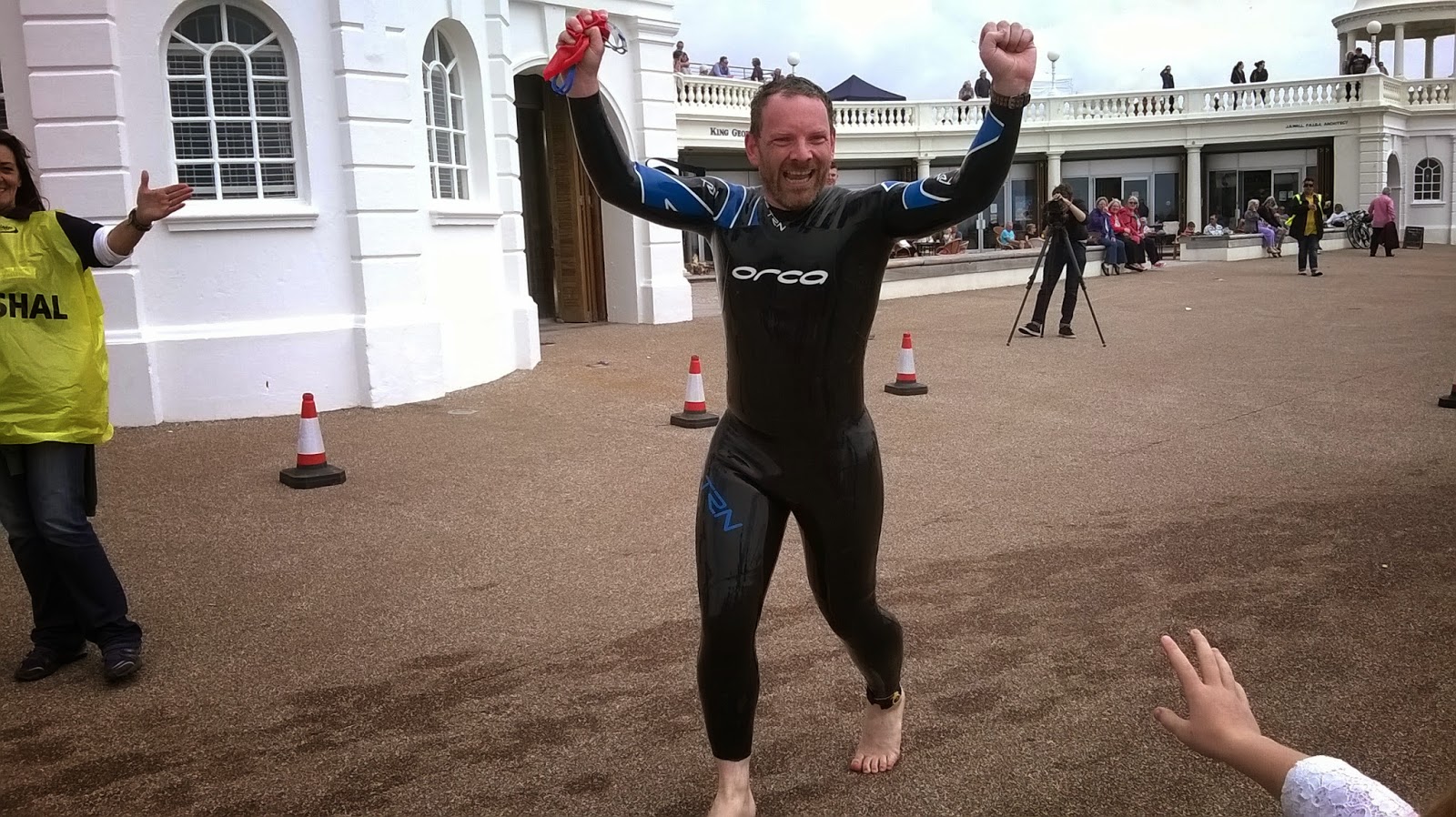 He looked as though he was having a great time as he ran up to transition. We raced up the steps too, so we could stand near where his bike was. As we sped along, Robbie said 'This is brilliant fun!' Meanwhile, we also spotted Olympic Gold winning Ice skater Jane Torvill, who had taken part in the earlier duathlon!

After a leisurely 3mins or so, Pete cycled off. We got to the side of the road, and waited. After a while, I wondered where my rucksack was, and had to run back to the cafe where I had left it by a chair... when I got back to the kids, they said 'Daddy's just been past'! Beacuse the course was all loopy, I did see him a few minutes later when he passed again. 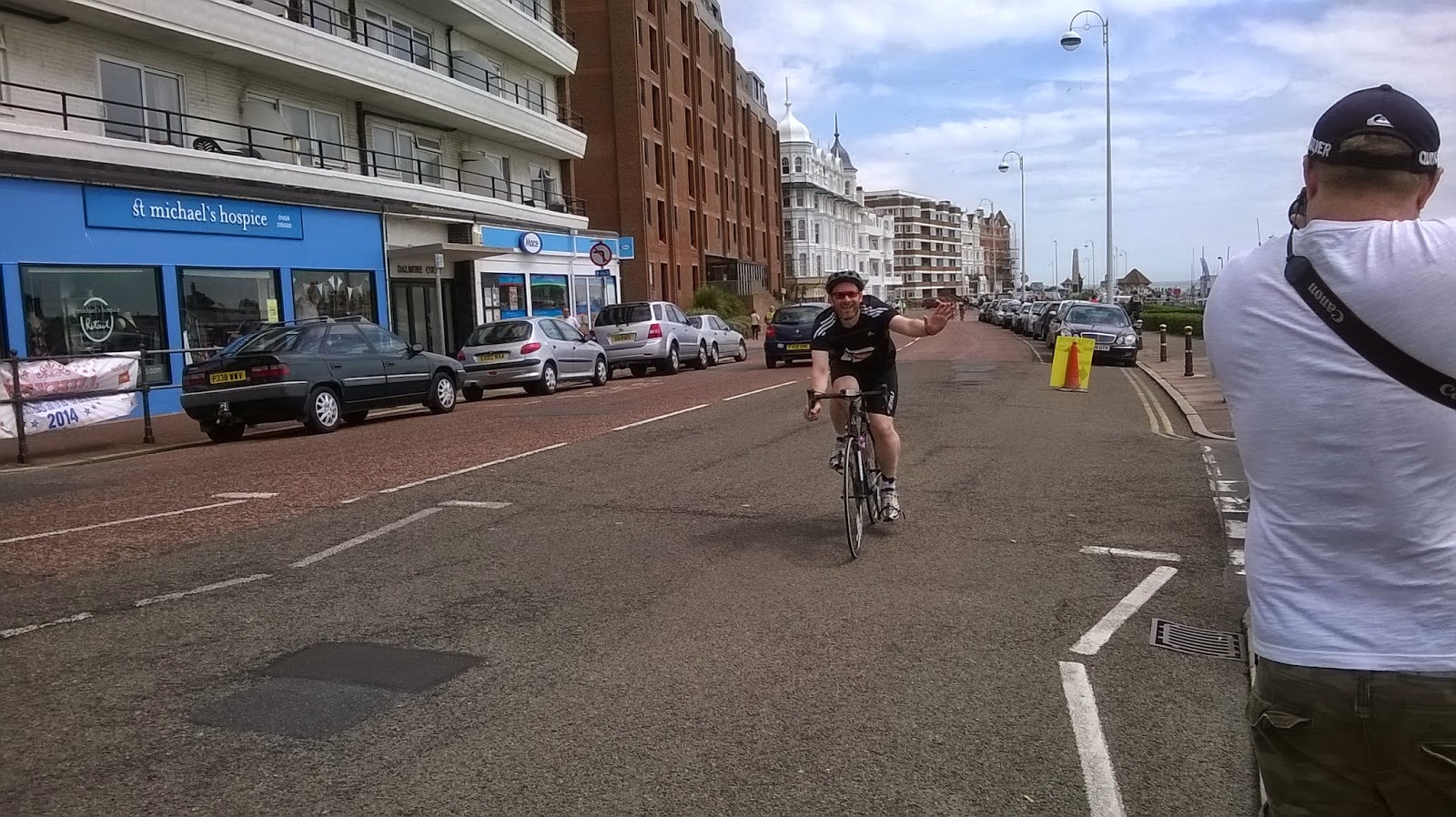 We crossed the road for a better view for his next passing, but after about 10 mins, Emma needed the toilet. We ran to the nearest one, dived in and out quickly and ran back, where Robbie said 'Daddy's just been past!' again! So much for spectating...

But we did see him come back to transition, where he left the bike and went off on the run. This was along the seafront, and this time I managed to catch him both times he passed.

We waited near the finish, and eventually, in a very impressive total time of 1h30mins-ish, he crossed the line. He was 35 out of 83 participants, so not even close to last. 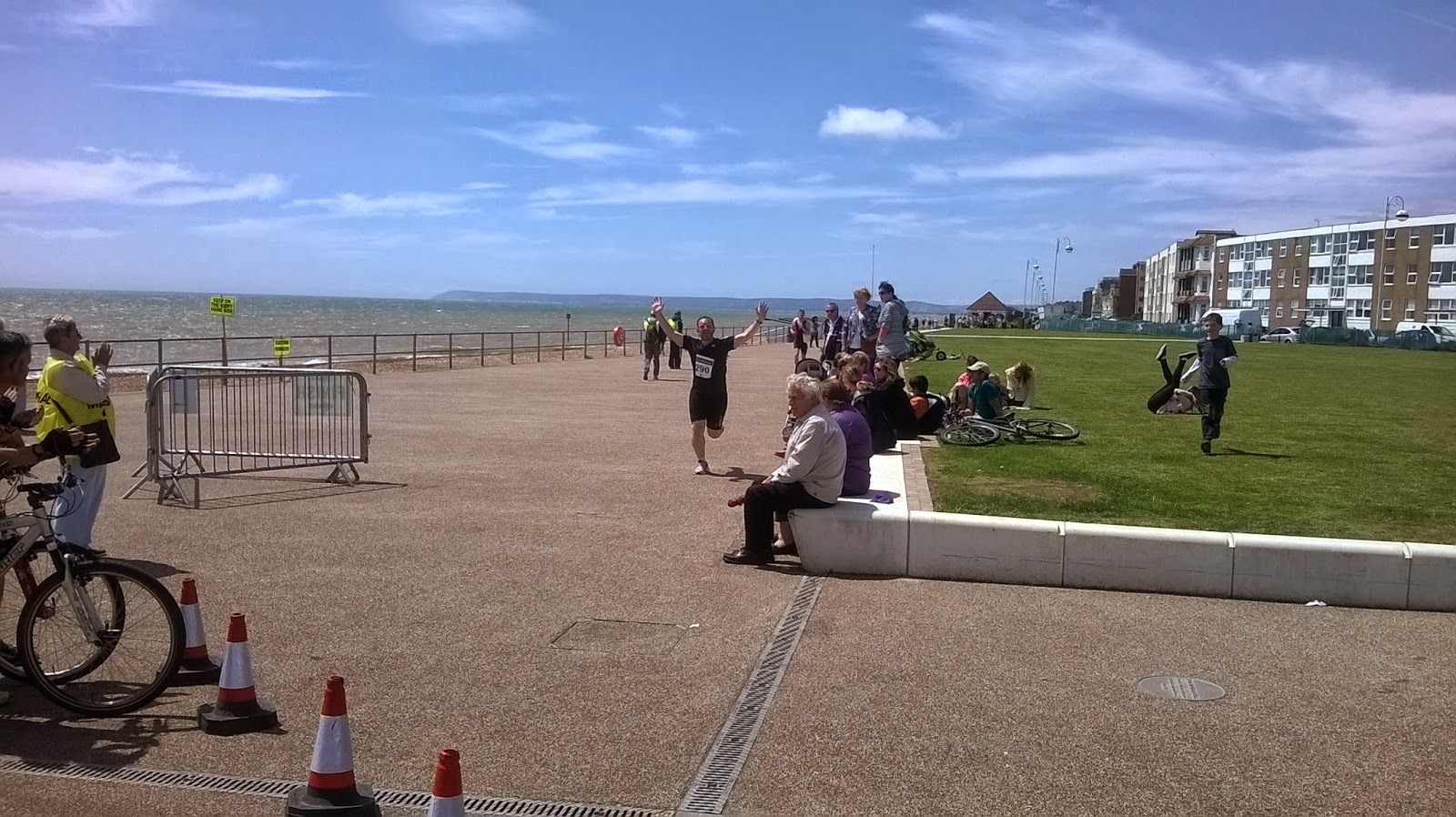 It was a really good day, and Pete's already planning another one. It was great to be spectating rather than running, but I must admit, I do like the idea of doing one of these myself one day... just need to learn to swim properly... Watch this space! 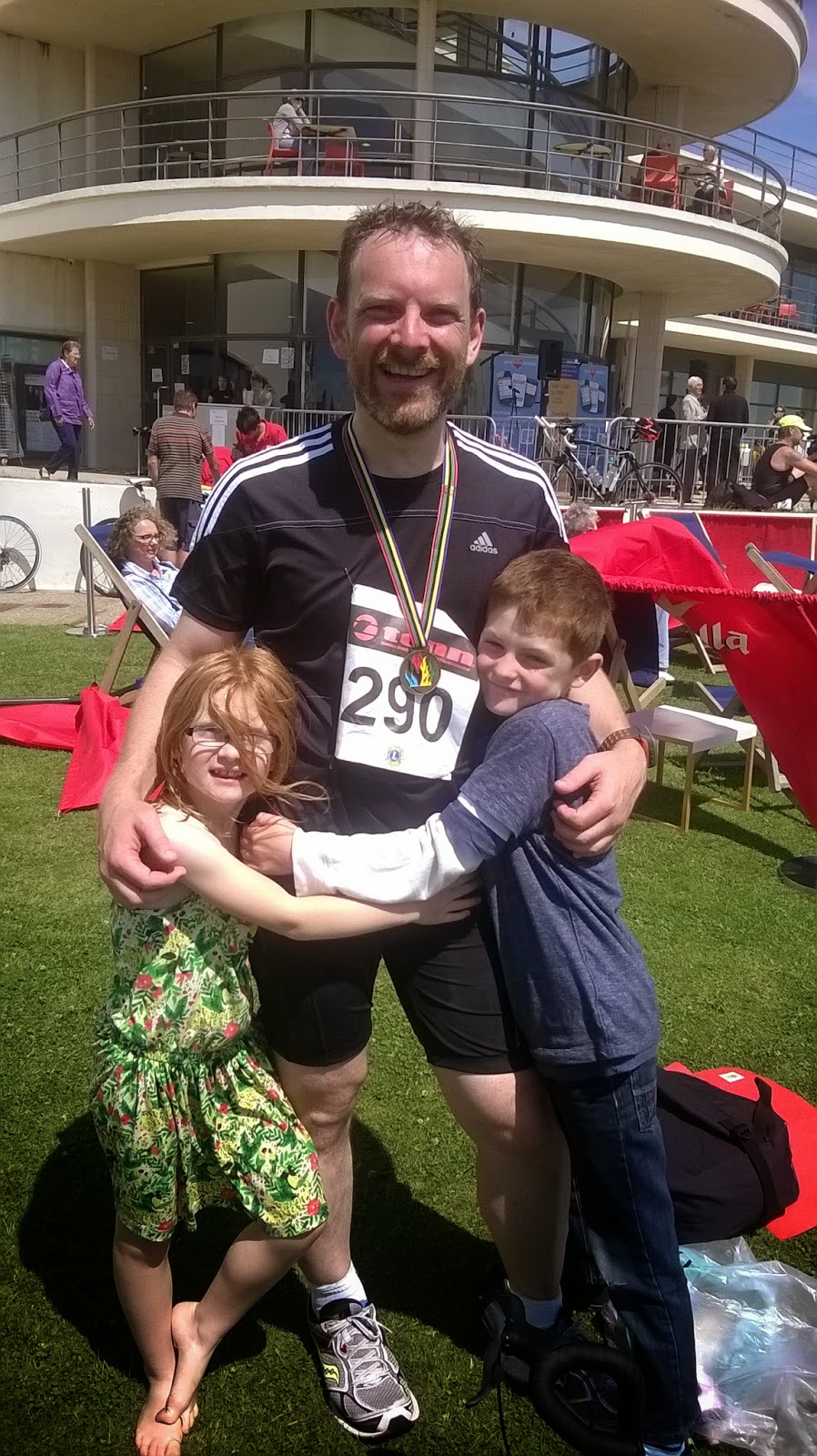 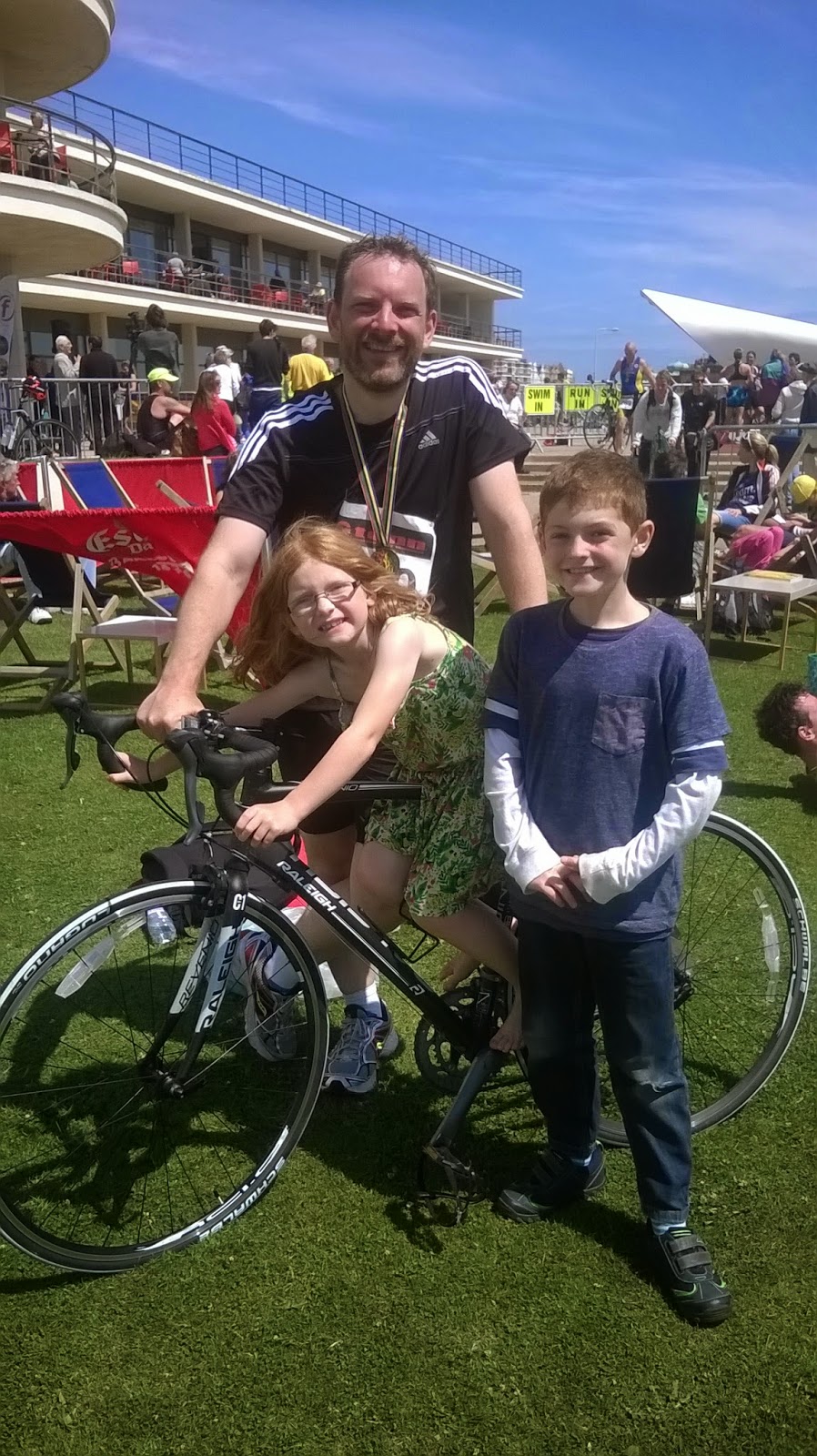 I had been wanting to do this race for a couple of years. It has a really good reputation as being well organised and friendly, and it definitely was those things!

It was also tougher than I had expected.

Pete, the kids and I drove about 24 miles to the small, pretty town of Wadhurst, where the race start was. From the town, we had to walk down a farm lane to the start of the race in between some farm fields, where there were cakes, drinks, a brass band and a piper!

There were 684 runners in total, so quite a crowd to get thorough a narrow lane, but it was chip-timed, so the wait to start didn't matter. The course was mostly around Bewl Water - a country park around a large reservoir. This meant it was very much off-road! 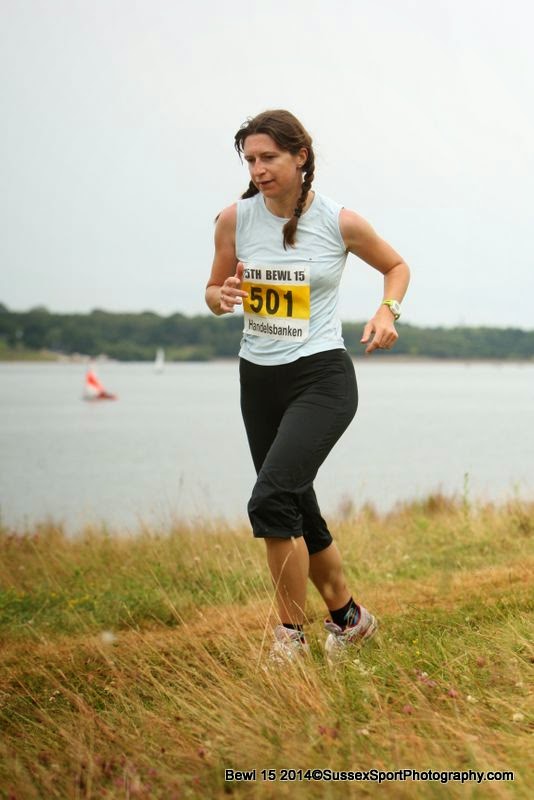 We ran through fields, long grass, muddy tracks, footpaths, and small roads, and the route included a number of gates and stiles to cross. It was described as 'undulating', and most of the run was just gently hilly, with lots of little ups and downs. The last few miles was more dramatic though, with a lot of steep hills - mostly up.

As I've never run a 15-mile race before, and as this was a fairly unique trail course, I didn't have any goal time in mind. That meant I could relax a bit and enjoy the surroundings. There were some good views, and the weather was cool with occasional rain and occasional outbreak of warm sun. 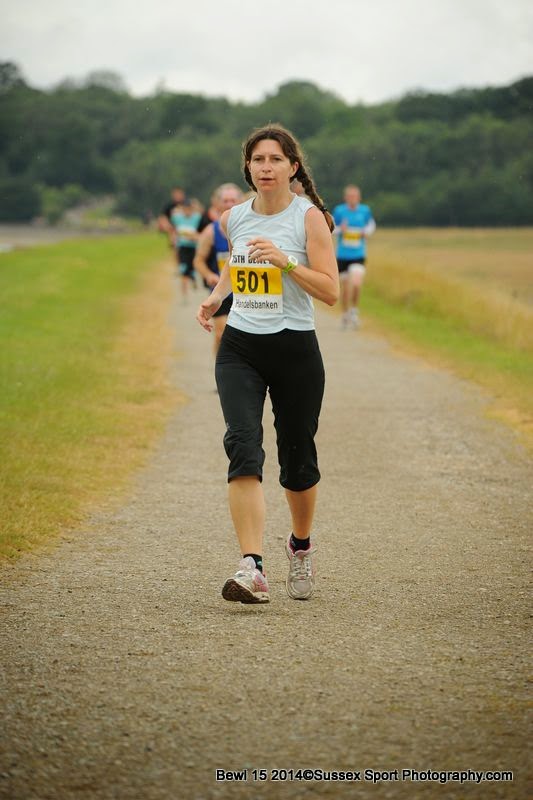 I enjoyed the first 7 or 8 miles, but started to find it quite hard work from then on. I think I had underestimated the extra effort involved in the terrain, which was quite hard to negotiate at times and I had to really concentrate on where I put my feet.

From about 10 miles, the race started heading uphill. This is where I started chatting with other runners - mostly swearwords at the hills! I took a slice of orange from a volunteer, and as I bit into it, I choked on the juice. A woman behind me gave me the last of her bottle of water - thank goodness for her help! Then I started chatting to a man called Eddie at the foot of a hill, and our short conversation got me up the hill without really noticing it - thanks Eddie!

As we got into a field near the end, a man with a South African accent started urging others on, and  complaining about the hills. We saw a sign which said 400 metres to go, then turned a corner and met another hill. The air turned blue with expletives! 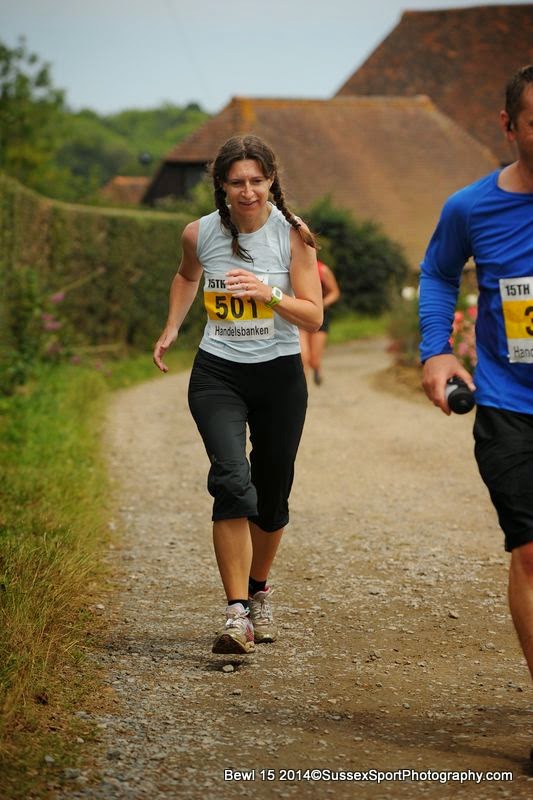 As we saw the finish, I was level with 2 men. We had a joke about sprinting to the finish (I was barely jogging by this point) but they both got ahead of me. Then I saw Robbie and Emma at the side of the path, urging me on. We high 5'd as I passed, and as I stumbled towards the finish, I heard Emma shouting 'Come on Mummy!', which definitely helped!

I was so exhausted. I felt almost as spent as when I did my marathons. At the finish we got a medal and free t-shirt, both showing the image of the lake. There was also free cake!!! BEST FINISH EVER!! 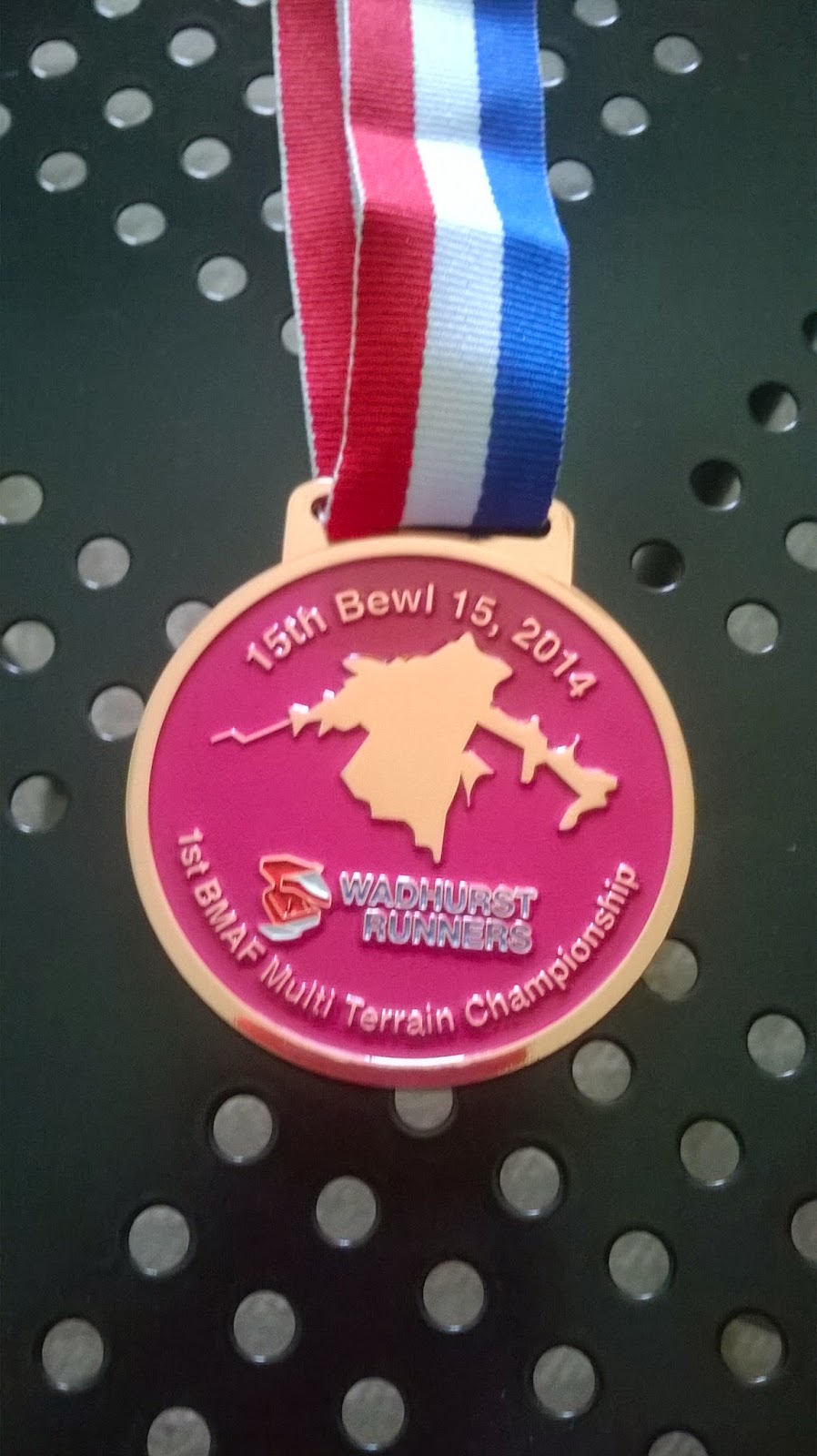 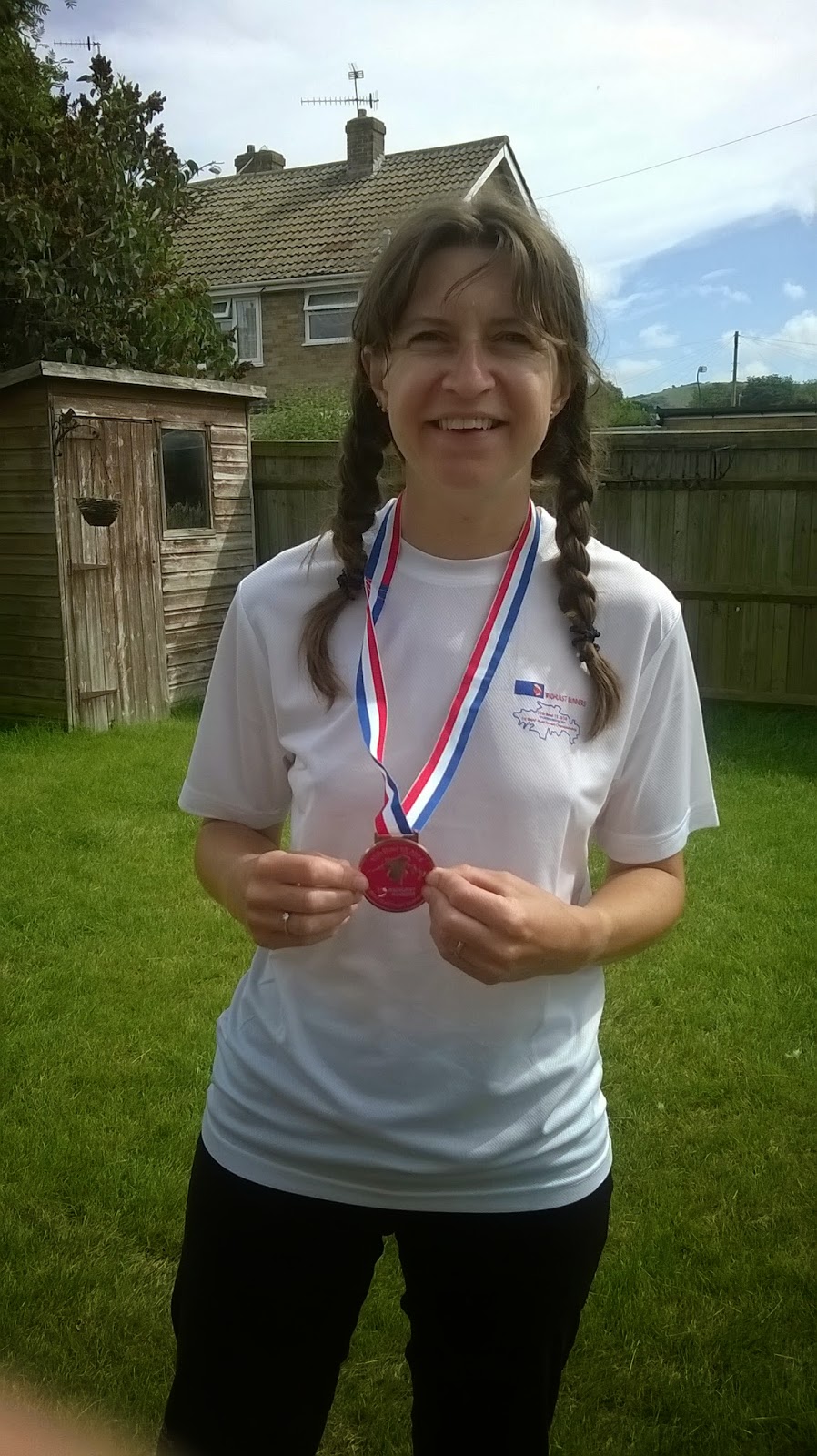