This month isn't even over yet and it's been one of my biggest training months EVER!!

At the start of June I was lucky enough to have 2 1/2 weeks when I didn't have any work on, so I decided to seize the opportunity to get some good running and bike miles in while I could.

This month has included;

A couple of beautiful runs over the cliffs: 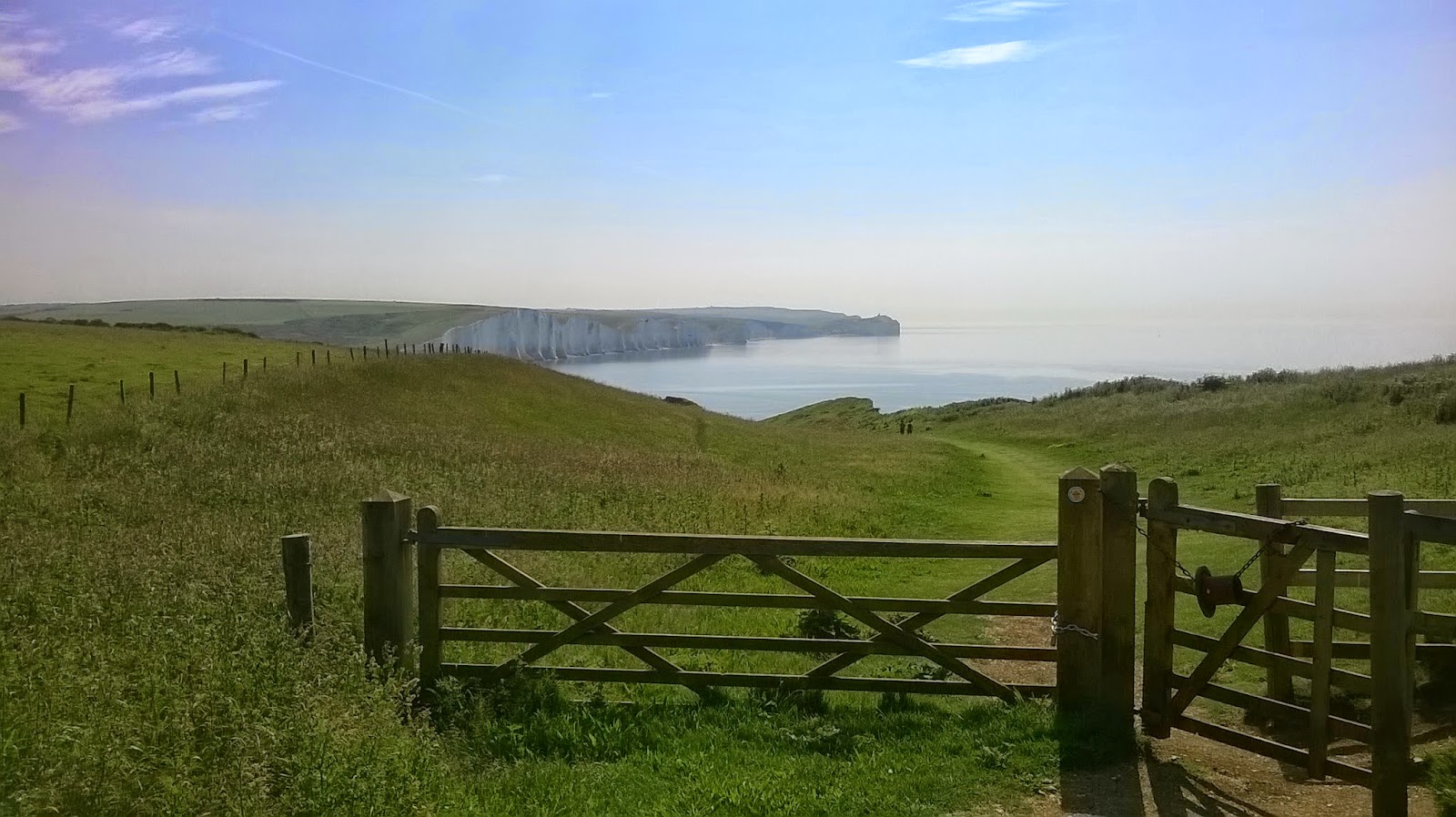 No fewer than 3 bike rides to the beach and back: 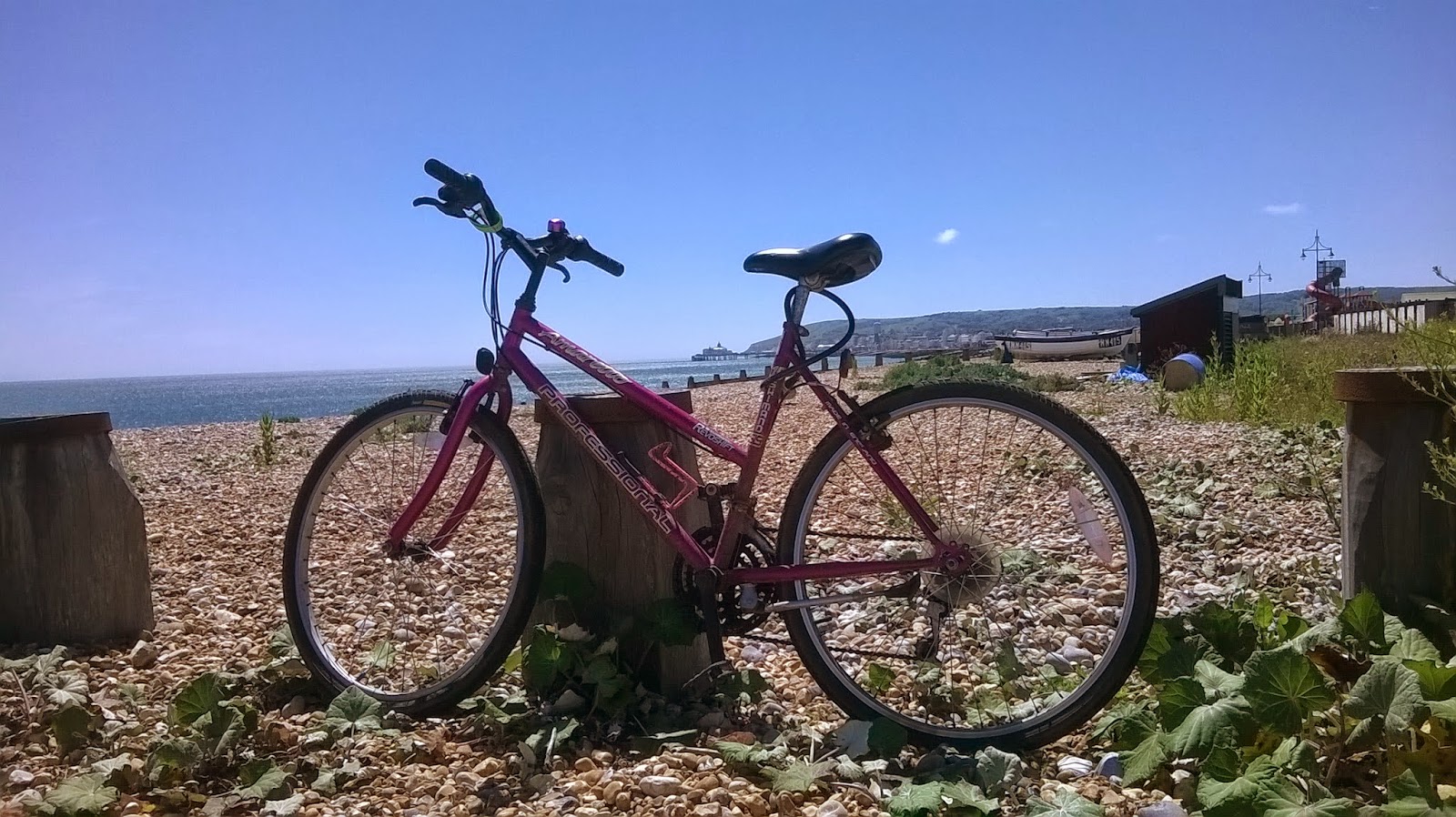 Several stops inbetween cycling for this sort of thing: 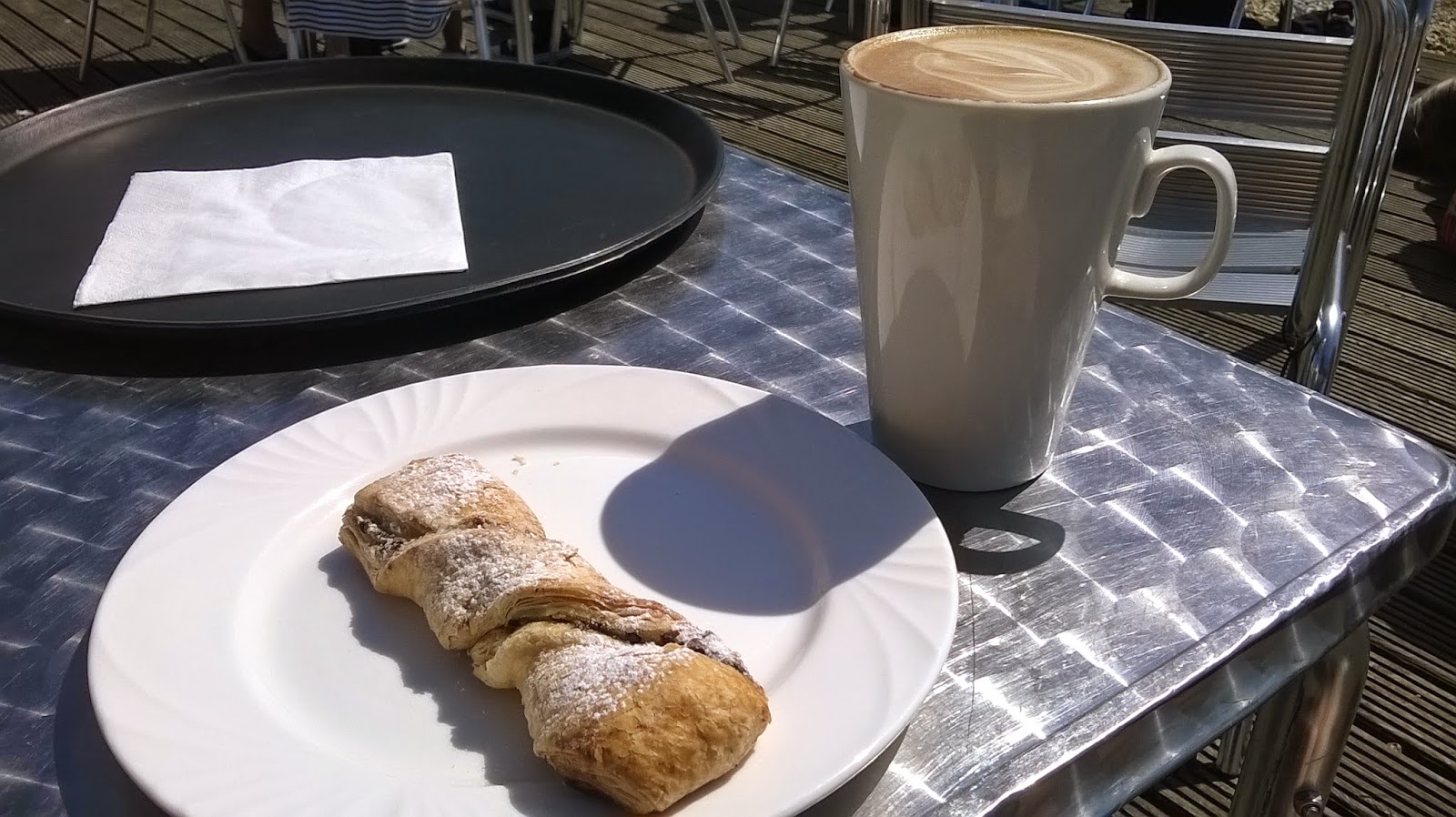 And lots of long runs and cycles up and down the lovely Cuckoo Trail: 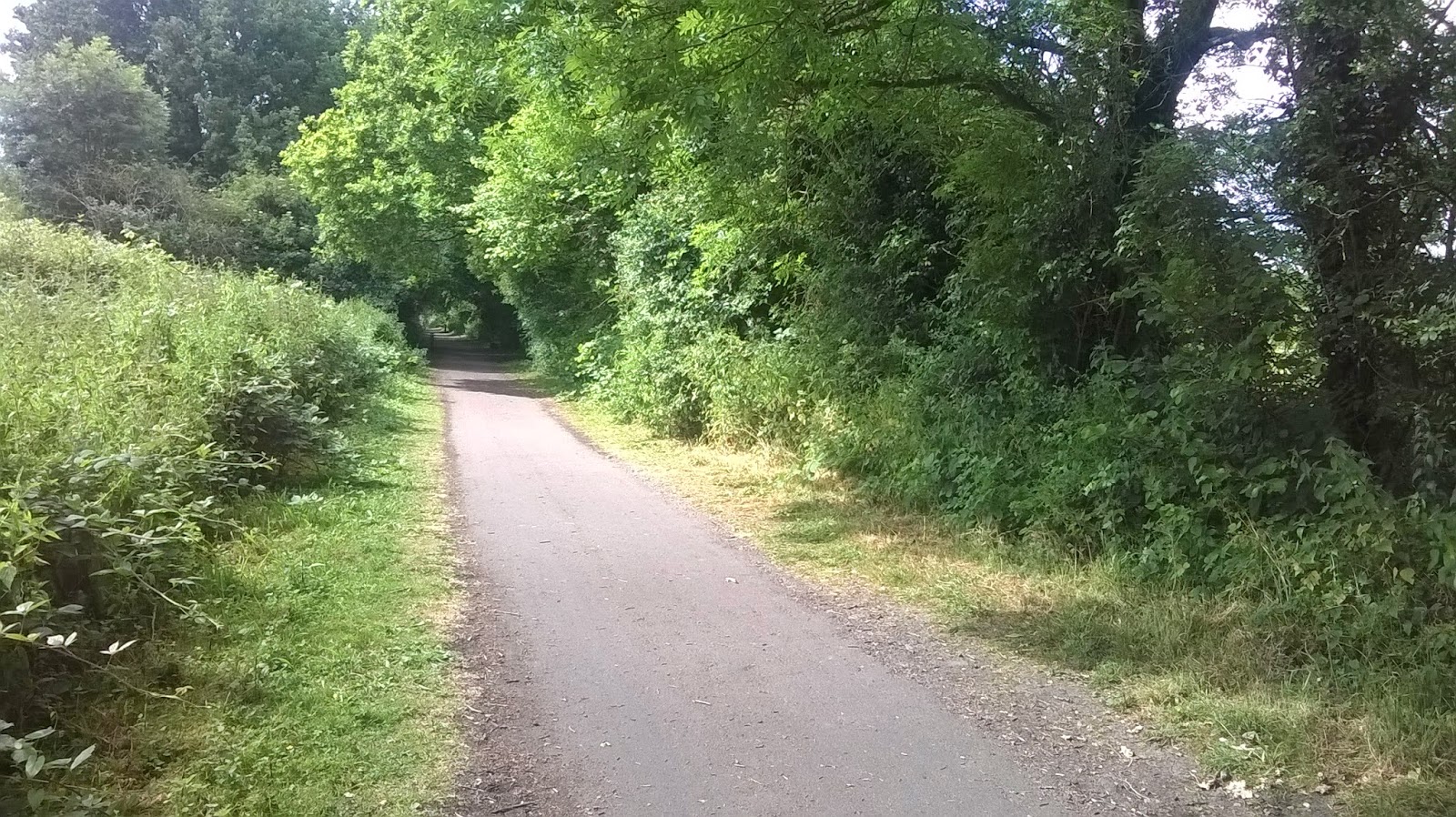 Unfortunately the work is now piling up again and I haven't got as many chances for long runs and long bike rides coming up, but I have got a race coming up next week which I'm really looking forward to. It's a 15 miler - not a race distance I've done before - so I've had to some long runs as training.

Over the last 3 weeks I've done a 10, then 12, and finally 14 mile run. The last of these was a bit of an adventure. I usually do a loop round the local towns for a long run, but at this time of year we are plagued by seagulls who like to swoop down towards me and scare me! So I am avoiding the areas where they are and sticking to the tree-shaded path of the local Cuckoo Trail. 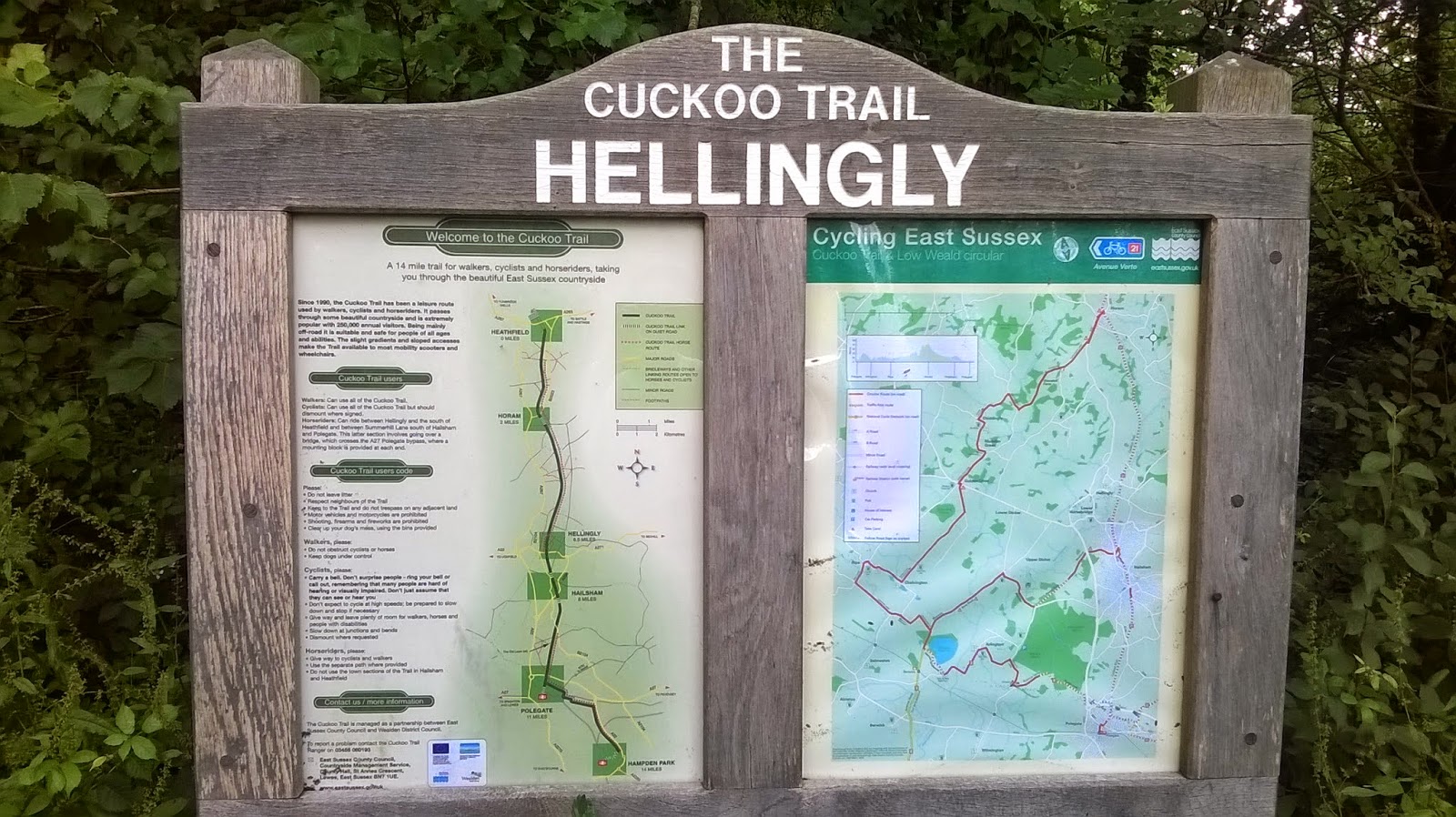 So I set off one morning with a plan to run 7 miles one way, turn round and run home. This would be further than I've gone along this path before - including cycling. I don't usually take water with me, but this was a very hot day, so I filled a bottle, put it in the freezer to cool quickly, finished getting ready, and left - without the bottle. 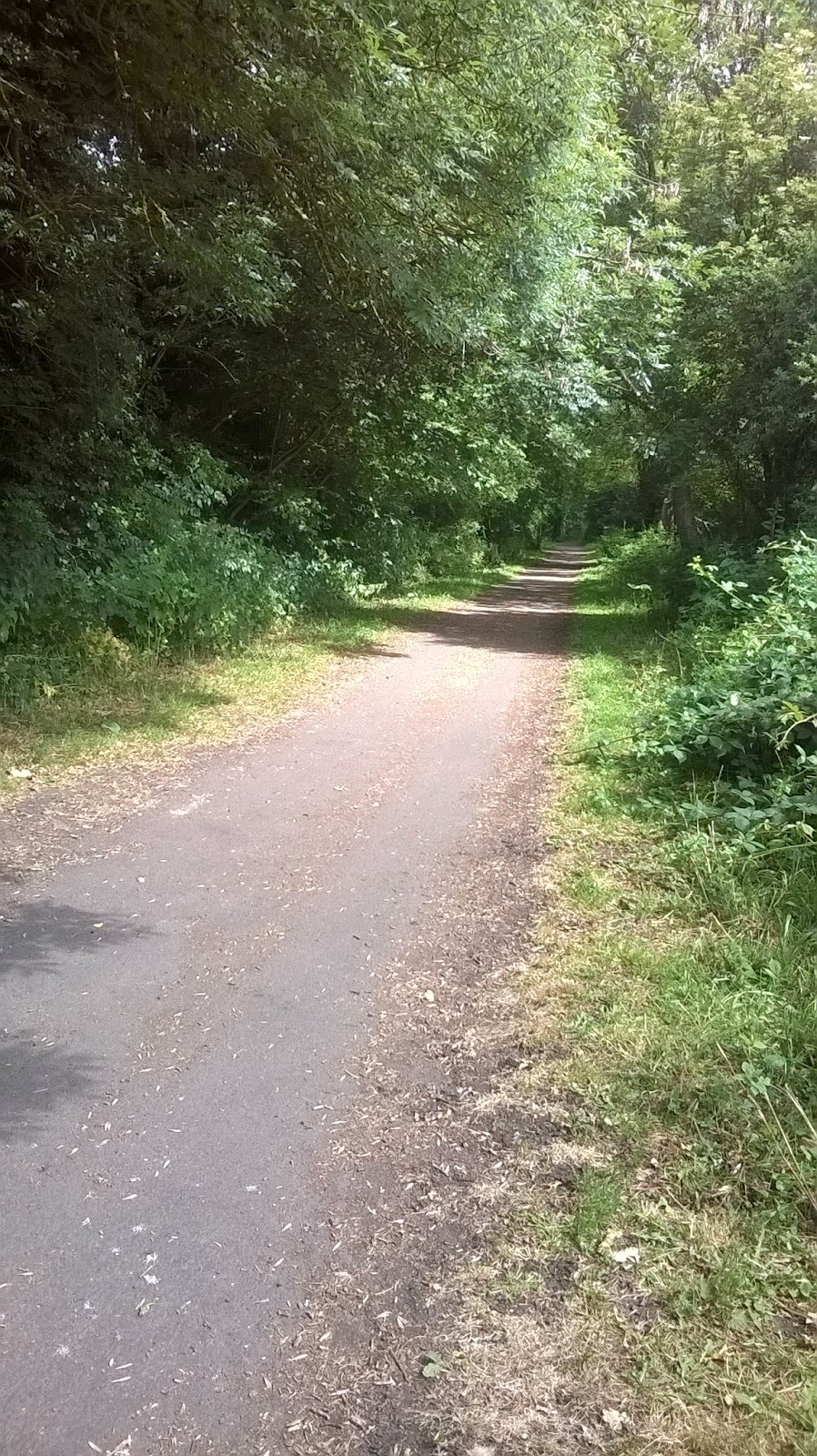 I wasn't too worried as I don't drink much when I run anyway. However, this was a hot day and a long run. After about 5 miles, I stopped seeing anyone on the path. It got more isolated and far from any roads, so there were none of the dog-walkers, kids on bikes and horse riders I sometimes pass nearer home. I eventually turned around and started feeling very hot and thirsty. 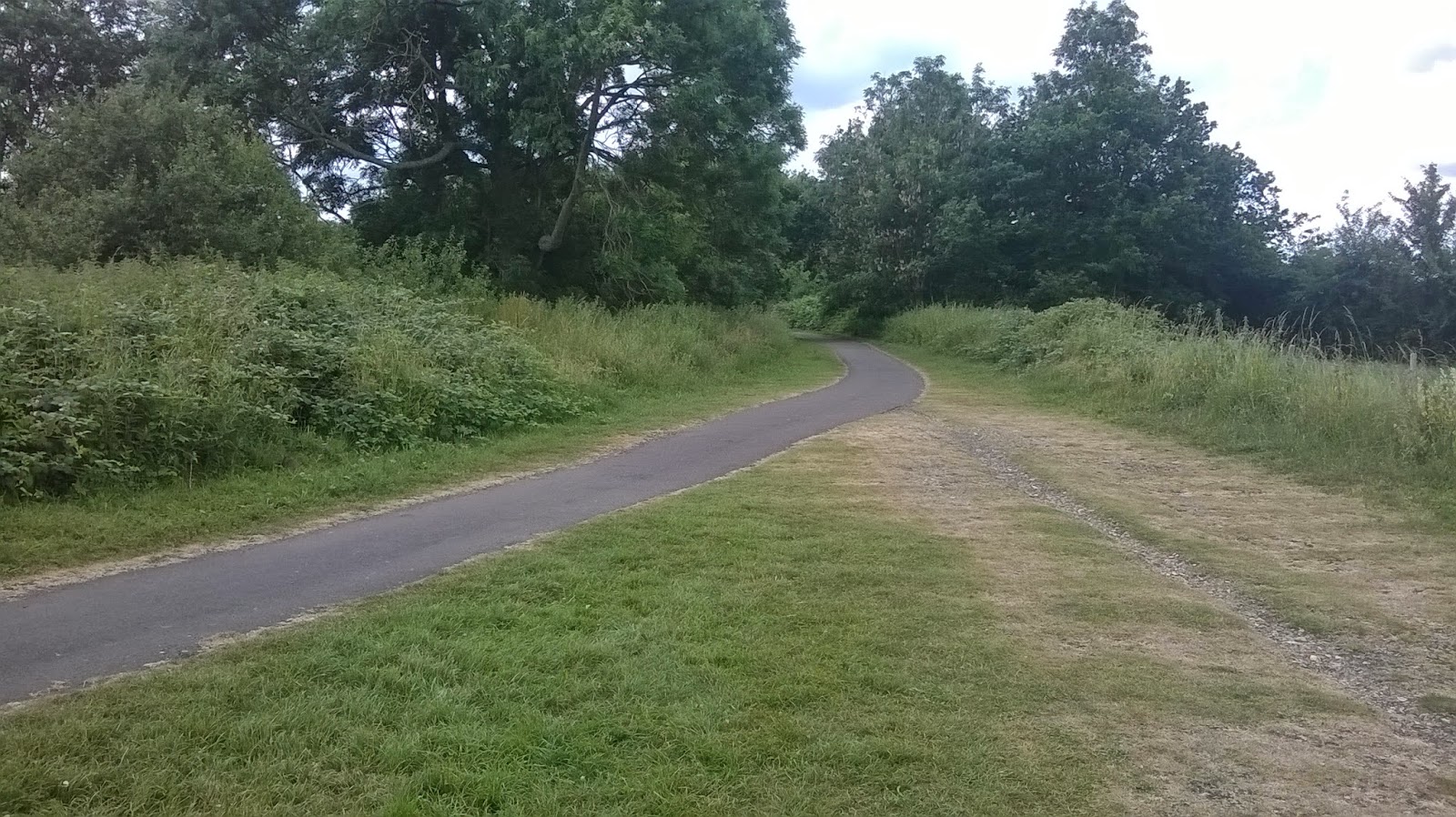 About 2 miles from my house, there is a little place off the trail called The Loom Mill, where they sell arts and crafts, and there's a cafe and toilet. I started thinking about it at about 8 miles, but wouldn't reach it until 12 miles... 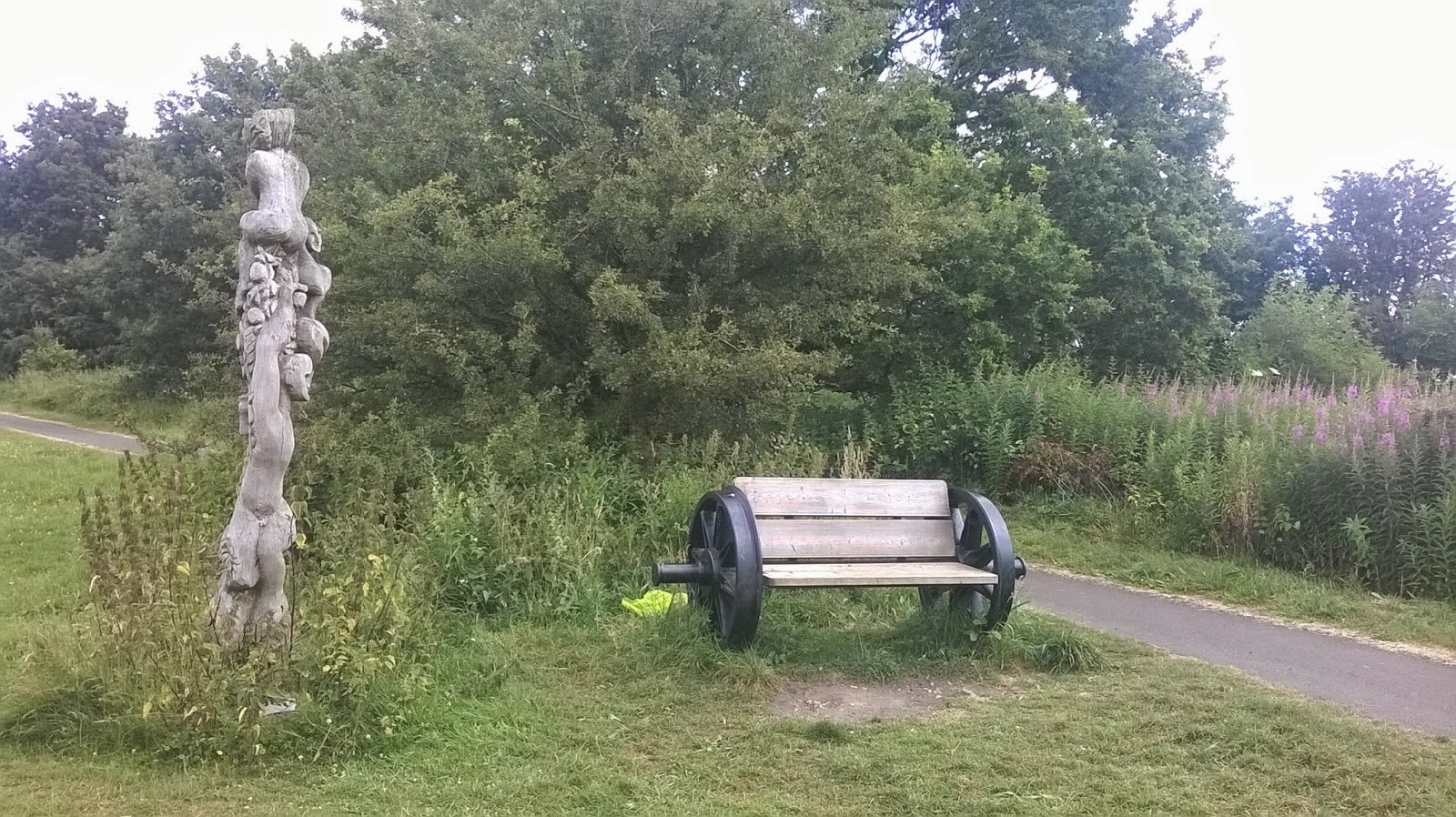 I was really enjoying the run though, and the miles went by quickly! When I finally got there, I went into the toilet, turned on the tap and started gulping down water. I sounded like a dog, slurping away, and it tasted amazing! After a while I left and finished the run.

I felt thirsty all day after that, and couldn't drink enough. Later I had a bad headache and felt unwell, and I think it was down to the lack of water. Lesson learned.

So with a few days still to go, I've already run just over 100 miles this month, and cycled about 90. This is big mileage for me! 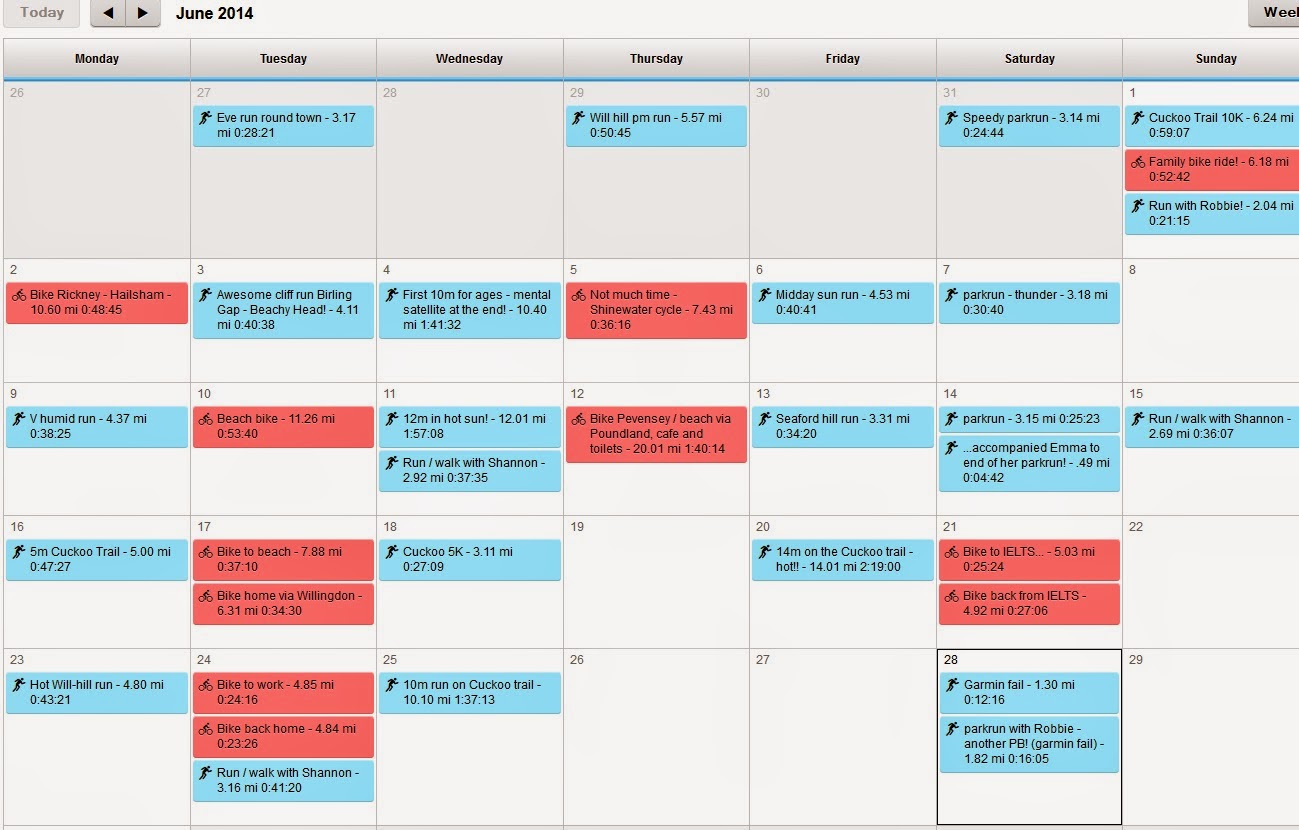 This is bound to drop over the next few weeks as I have more work to do, but I'm hoping to get in some more long bike rides and plenty of running too!
Posted by Liz at 23:09 3 comments:

About time I blogged...

Things have been busy with work and children and busy weekends for a while, but this last couple of weeks I've had a bit of time off (from work anyway, not from children or busy weekends).

So I haven't blogged for a very long while, and it's about time I did a little catching up.

Since my last post in April, Pete, Robbie and Emma and I have all been very active. Pete has even signed up to do a triathlon in July! This is pretty significant as it's his first event since running a 10K in 2006 I think, and he's been up early training for weeks. He's lost a load of weight and is fitter and slimmer than I've ever seen him in the 18 years we've known each other!

Pictures speak quicker than words, so here's a glimpse of what we've been up to over the last couple of months.


This was a morning of races which started with the kids' 1 mile race. It was mostly round the track, although they ran off into a field for a bit. Robbie ran 9.26 and Emma ran 11.03!

My 10K started and finished on the track, but slightly to my surprise (and dismay), most of it was in wet fields amidst angry sheep and one herd of charging cows! This was quite scary, but a brave marshal managed to shoo them off. The land was quite boggy in places and I found it a very tough 10K. I ran it in 54.49. 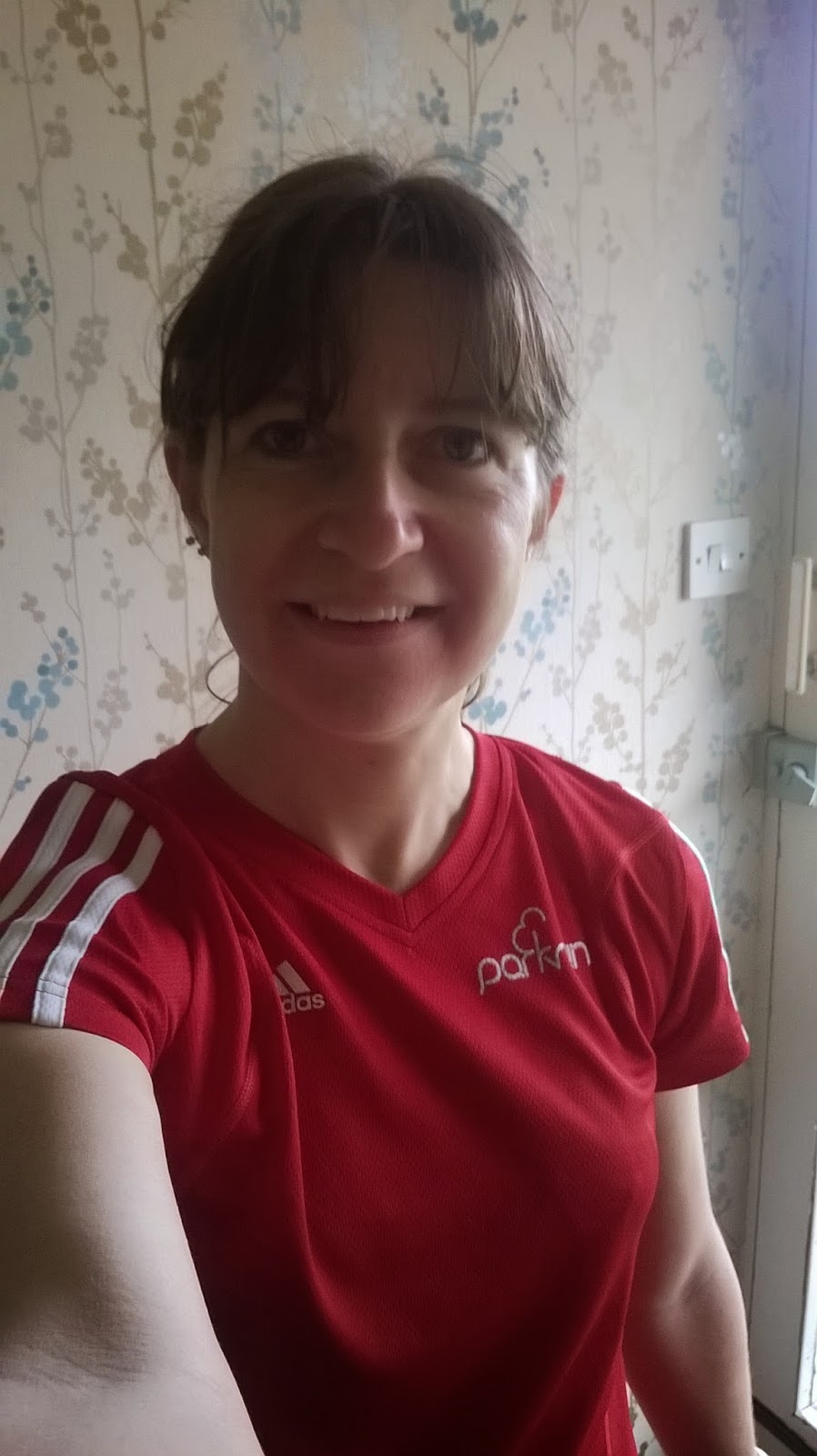 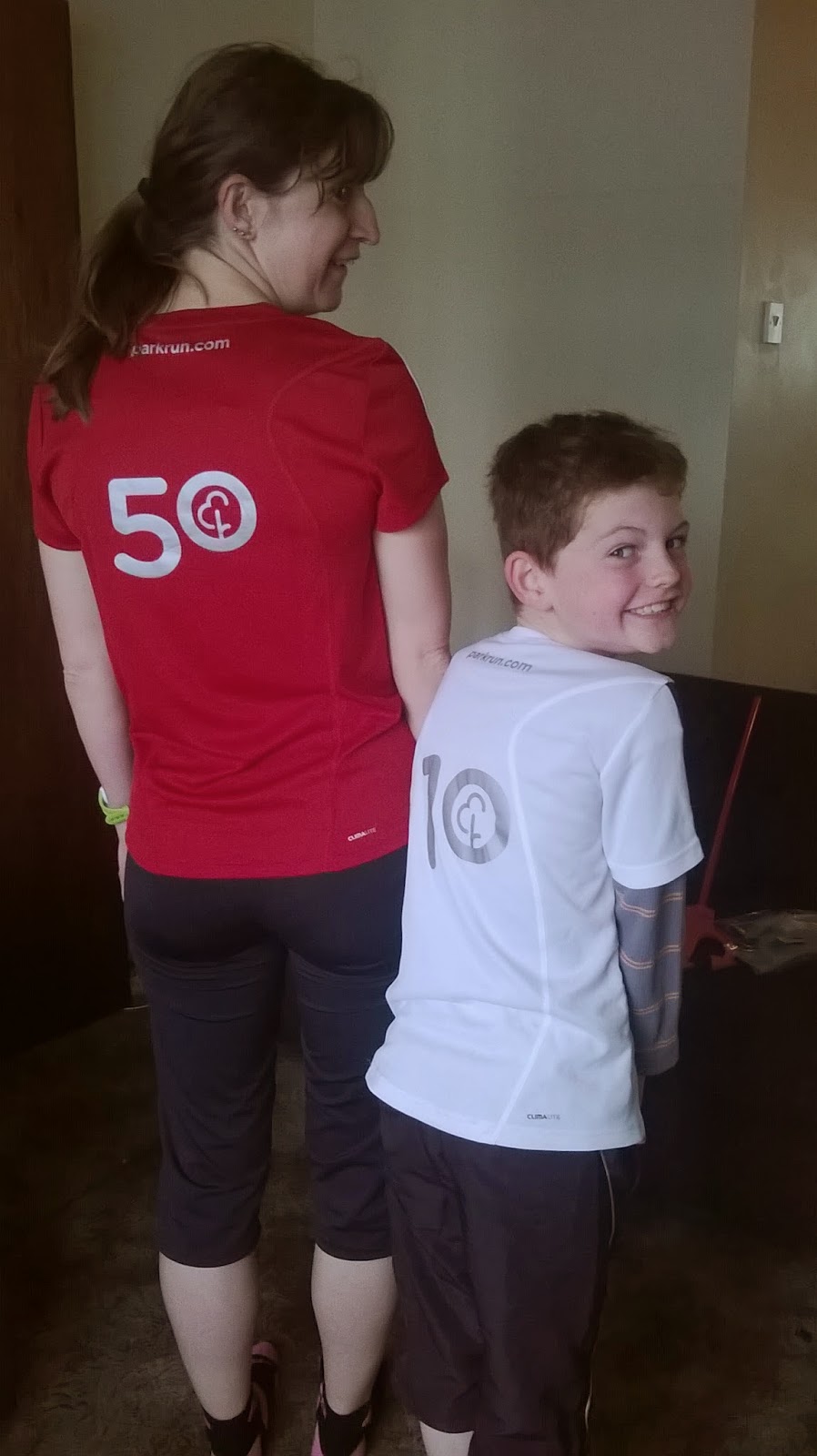 In April I also ran my 50th parkrun, which entitled me to a free t-shirt! It's a really nice shirt, and as Robbie got his 10 t-shirt ages ago, we can co-ordinate nicely on a Saturday morning now.

In May we all went indoor climbing one weekend! This was something we hadn't really done before but thought we'd try. It was good fun and the kids loved it. The next day they were fine, while Pete and I struggle to raise our arms above our heads... 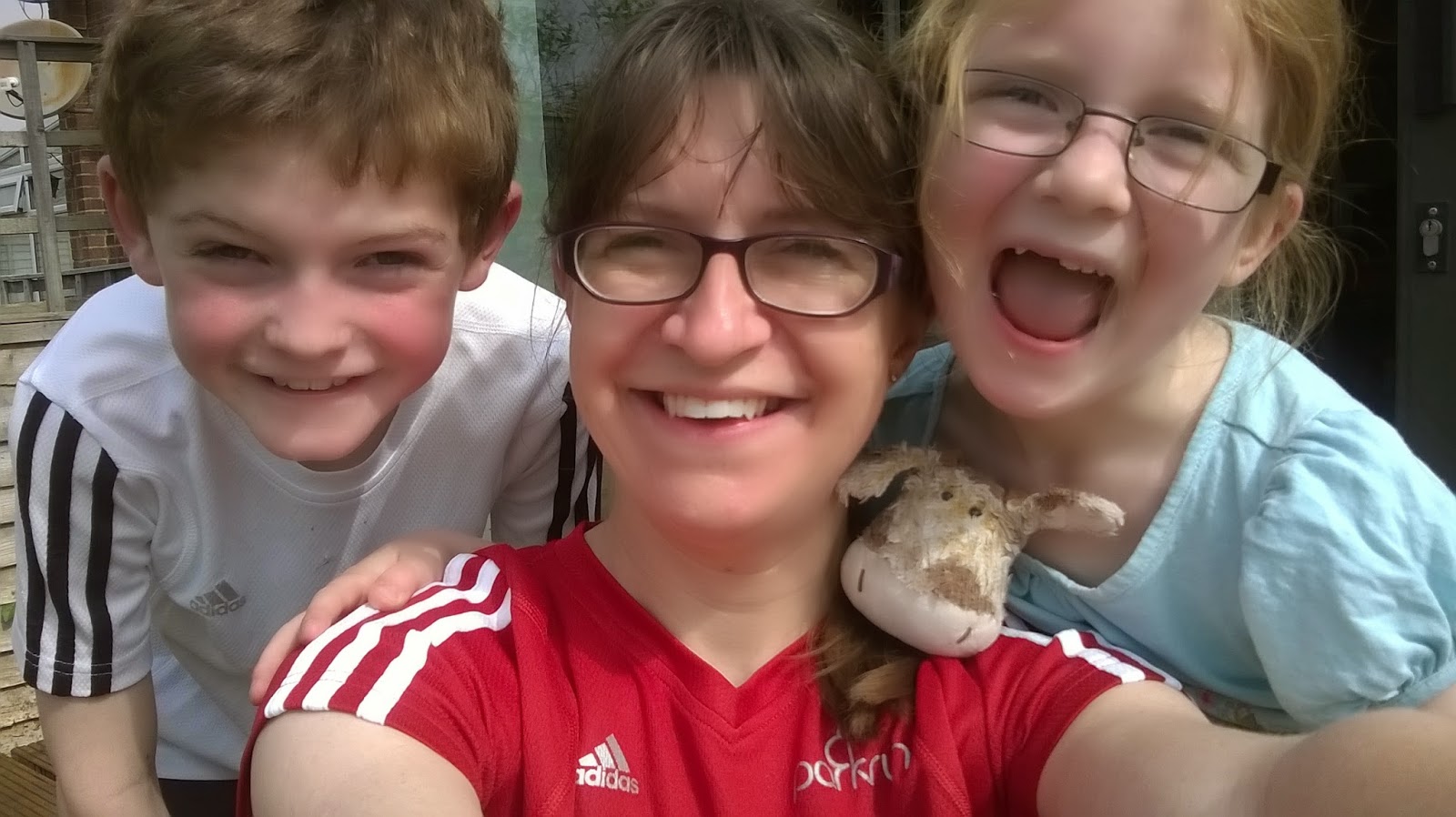 As we've been parkrunning regularly, both Robbie and Emma have recently smashed their 5K PBs! On his 30th run, Robbie ran 29m59s - his first sub 30 5K, and over a minute off his previous time. The following week Emma charged round to an amazing 34m10s, another huge PB! 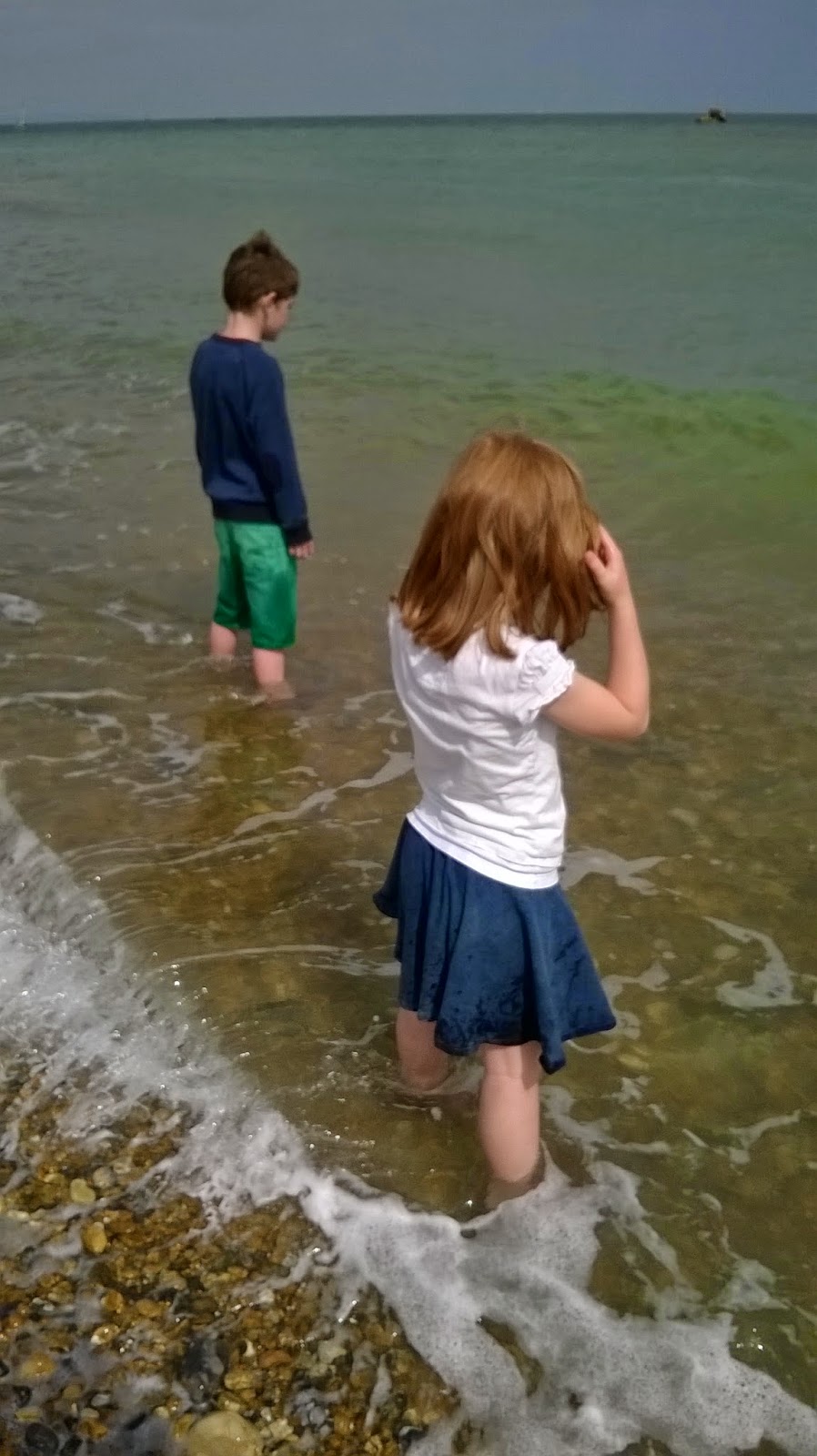 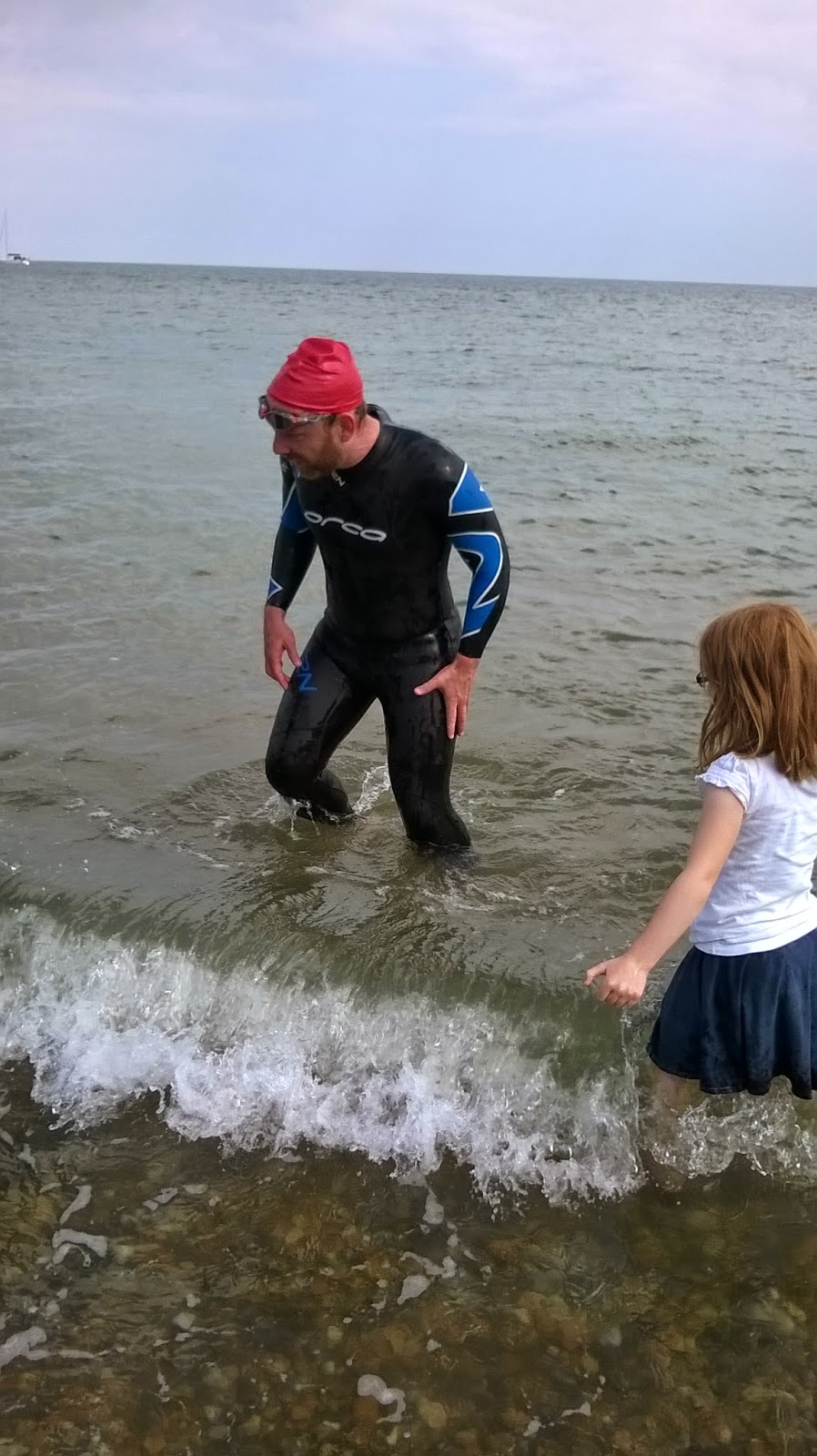 As part of triathlon training, Pete has to get used to swimming in the sea, so he has joined a group of nutcases who regularly get together on Eastbourne beach to take the plunge. It's great at weekends because Robbie and Emma absolutely love the opportunity to paddle and get themselves soaking wet, while I like nothing more than sitting on the beach doing nothing - perfect! 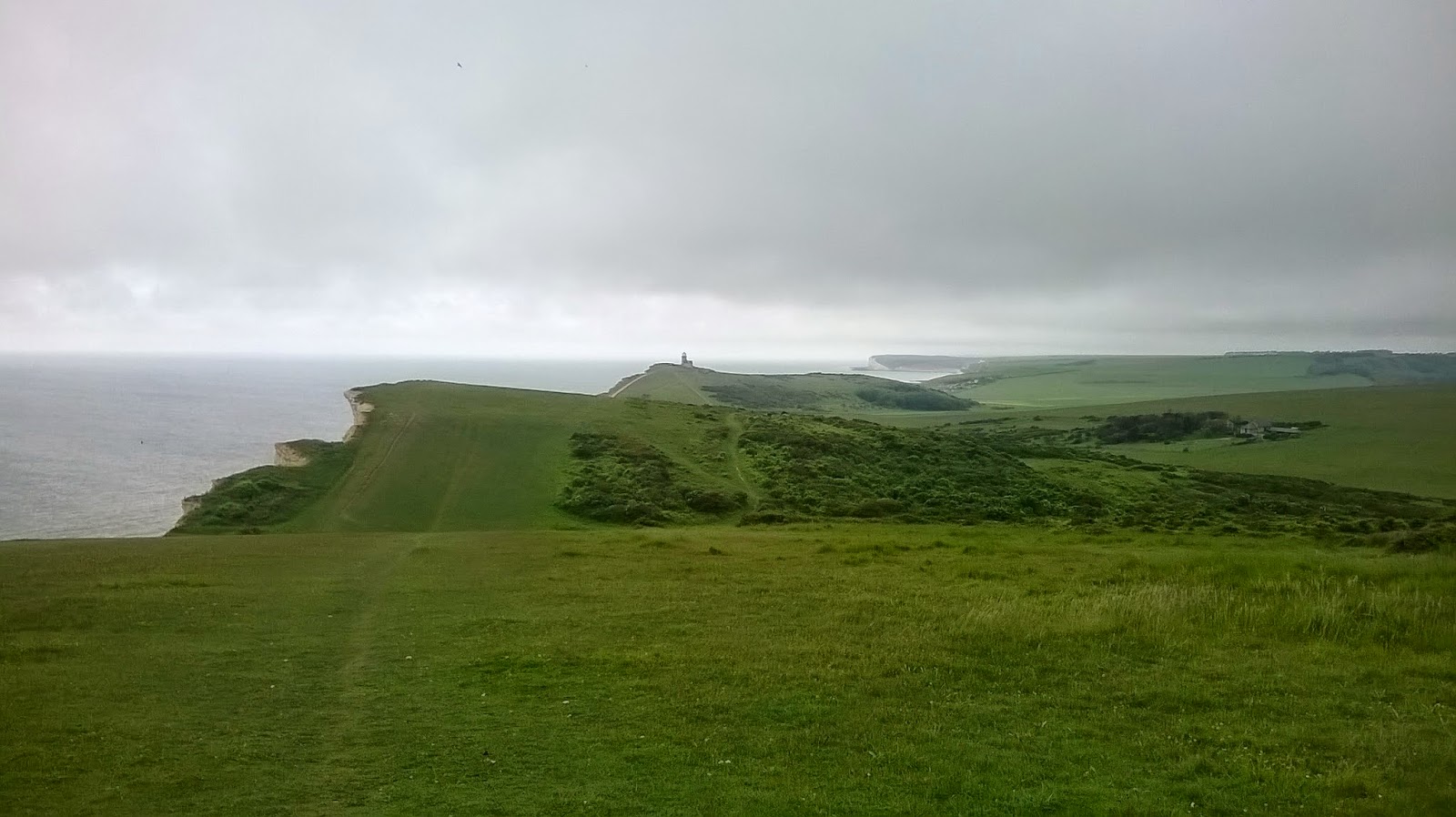 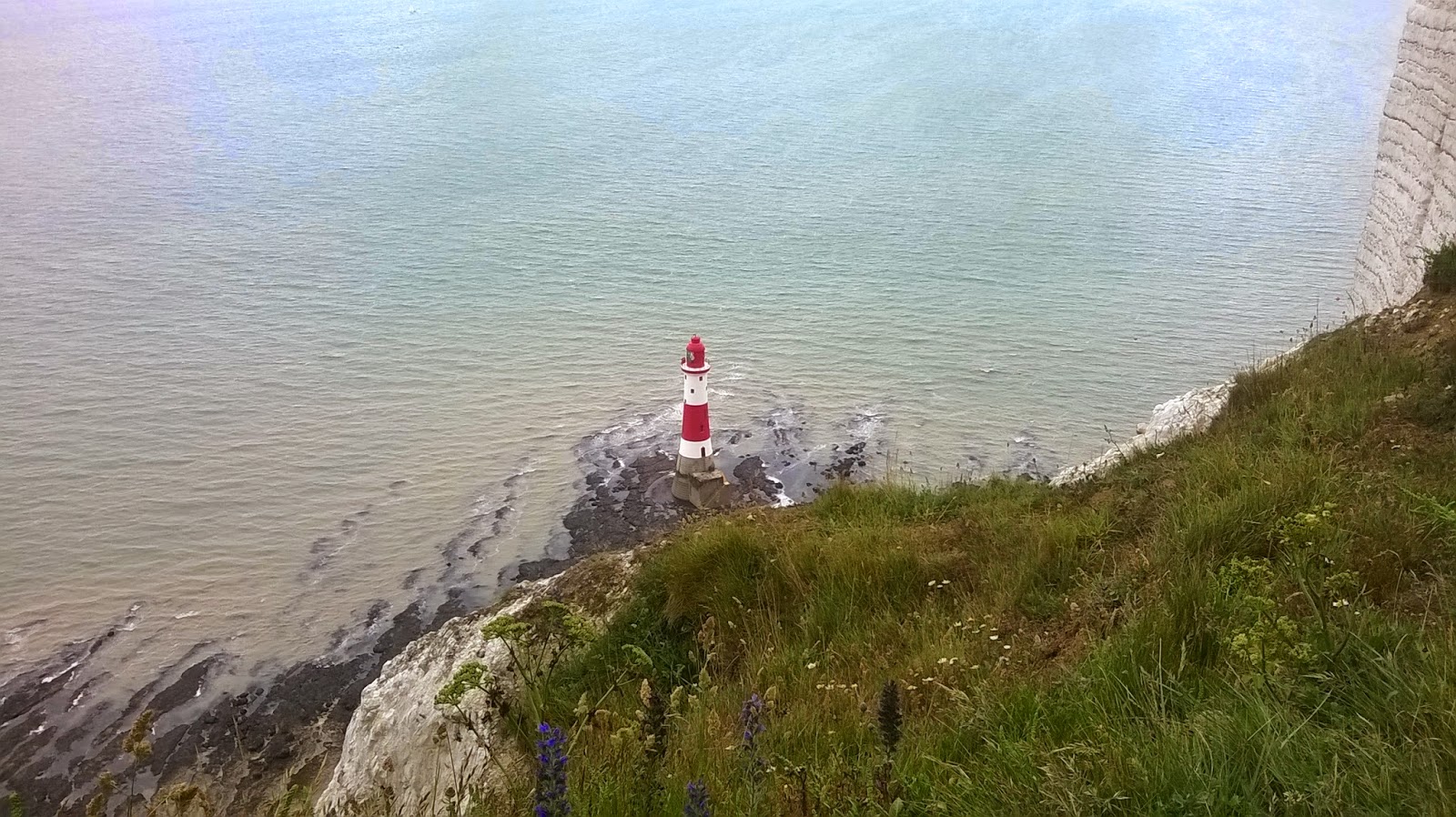 While I've had some more free time recently, I've been making the most of it by upping my running and biking, and doing some different routes. Last week I drove to just about my favourite place in the world, and ran over the cliffs. It was a tough hill run, but stunning scenery. The lighthouse at Beachy Head (above) is quite iconic round here, and these were the best views I've ever had of it - breathtaking.

So that's about it. Next week it's back to work, but I hope I'll be able to blog again a bit sooner. We've got lots of plans, including some races, camping trips and the Commonwealth Games in Glasgow - can't wait!
Posted by Liz at 13:49 4 comments: