How I started running

At school I hated running. In fact I didn't enjoy many sports apart from gymnastics and trampolining, both of which I was good at. But the cross-country runs were the worst. A group of teenage girls would set off from the school, and the sporty types would disappear into the distance almost immediately. After perhaps a minute of running, I and the other unfit, uninterested plodders at the back slowed to a walk, and spent the rest of the lesson strolling around the fields, gossiping. Often we would go out of school grounds into the residential streets and on one memorable occasion, I took some friends on a slight diversion to my house, where my Mum kindly provided a snack. I also remember on the last day of school, at the age of 18, deciding with a group of friends  to run round the 400m track for fun. We got to the 200m mark before most of us gave up, wheezing with exhaustion. This was my experience of running.

Throughout my twenties I did very little exercise, but I read a fitness magazine every so often, which convinced me that I was quite healthy. I ate whatever I wanted and steadily put on weight. Shortly after turning 30, I'm not sure why, but I started doing occasional exercise videos, one of which was by a tv expert, Joanna Hall. After a few months of enjoying the video, I bought her book 'The Exercise Bible'. It was a selection of basic information about all different types of exercise. There was a small chapter about running, and there I read about a beginners' running programme. This put forward the idea that you could actually learn to run.

The programme had you starting with a run-walk combination, and gradually increased the amount of running, building up to 20 minutes. I decided to try it. I ran off down the road with an eye on my stopwatch. After about 2 minutes, I had to stop and walk for a few minutes, and then I ran again, and carried on this way for a total of 20 minutes.

I remember how I dreamt of being able to run continuously for 20 minutes - it seemed ridiculous and unattainable, but I didn't give up. I started to go out regularly, although I found it difficult to stick rigidly to the programme. Essentially, I ran for as long as I could; walked until I had recovered, then ran again. In hindsight, I was probably running too fast, and if it had ever occurred to me to slow down, perhaps I could have gone further.

I was very motivated - I just had a burning desire to be a proper runner, and I thought that if I could keep running for 20 minutes, and do that a few times a week, that would be enough to stop me feeling embarrassed. After a number of hiccups and a few months, I eventually got there. I was elated the first time I ran round the block and kept it up for a full 20 minutes! It felt like an incredible achievement, something I'd never really though possible for someone like me.

By that stage I was hooked. I must have been serious because I bought another book - The Runner's Handbook. It seemed to me that running for 30 minutes would qualify me for that most desirable accolade: 'a proper runner'. I had a new goal.

Over the next few years I changed jobs, moved countries and had 2 children, and running often fell by the wayside. Whenever I picked it up again, I'd have to add in some walking, but I was always able to start with at least 10 minutes of running, never having to revert to 2 minutes. 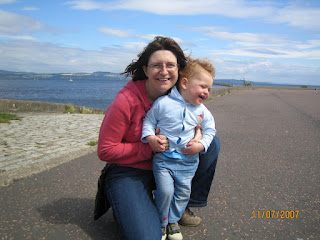 Then, a couple of years ago, I got more serious. I ran my first 10k in 2009 - a distance I hadn't thought possible 2 years earlier when I watched my husband do it. 4 months later I ran a half marathon. Shortly after that I joined a running group, and in May 2010 I completed the Edinburgh marathon. 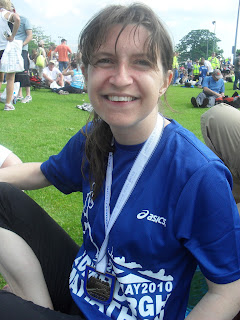 During the training I remember running continuously for 3hours 30 minutes. How incredible that a few years earlier, I'd though of 20 minutes as wishful thinking. I honestly believe that if I can do it anyone can. All you need is motivation, desire and determination (and an understanding partner). I just wish they'd taught me how to run at school.