No running but still busy

Although this meant I missed 2 weeks of parkrun, I did take the kids along to marshal one Saturday, and the following week, Pete ran round with Robbie!


It was Pete's first ever parkrun, but of course Robbie's 11th, so he was able to show his Dad the way! Emma and I spectated and cheered people on, and did a little bit of pointing the way as a few new runners almost got lost by the play park where we were hanging out.

They finished in just over 33 minutes, with Robbie doing his usual sprint to the line to finish ahead of a parent!

This was the 3rd race (after the 10K I should have run in) that I had spectated at while not being able to run - I've pretty much had enough of that now!

Last Saturday, after parkrun I was working in the afternoon, so I decided to cycle to work. I hadn't been on my bike as I thought it might affect the ankle, but I was fed up with doing nothing, and it was a lot better than before.

So I biked 10 miles, and it was a bit sore afterwards.

On Sunday we all went swimming, and while the kids were practising their dives with Pete (bellyflop for Emma and legs-akimbo for Robbie), I swam a few lengths. I don;t think swimming caused any harm to my ankle at least.

Last Tuesday I had enough time to squeeze in a workout, so I did another bike ride. It was a beautiful autumn day and I had a sunny ride along the cycle path. 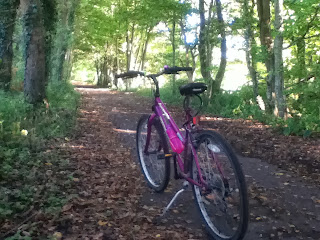 It was one of those bike rides when I stopped off for a coffee, a read of my kindle and a pastry. In fact I must be putting on weight as I haven't cut down on my eating at all while I've been languishing on the injury list.

I haven't tried running yet, but my ankle feels almost back to normal - there's just a niggling pain when I've been on my feet all day. So I'm planning to run parkrun this Saturday. I'll jog round with Robbie so I won't be pushing it. Hopefully I'll be back to normal soon! 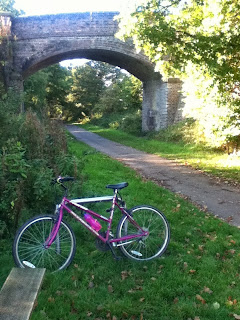 I was having a great month of running in September, right up until the point when I got injured. The kids went back to school which left me with a lot more time to fit longer runs in, but I also went back to work, which stole a lot of my time too.

Robbie and I continued to run parkruns together, and he ran his 10th last month. That was our original target, but he wants to carry on doing them - yay! I ran my fastest ever mile, so I clearly had some fitness at one point. And I ran a great fun race along the cliffs and up and down a big hill at Firle 10K.


I was enjoying building mileage each week and really looking forward to running Bexhill 10K for the third consecutive year when I got this damn ankle injury. I don't even know what happened, it just got sore and swollen. The Doctor diagnosed torn ligaments and prescribed rest, anti-inflammatories and a long tubi-grip bandage. It's much better now, but I haven't run for 2 weeks and it's not completely better yet, so I daren't do too much too soon.

There's a 10K at the end of October I was hoping to do, but it's another hilly one and I don't want to damage the ankle. I had been aiming to run 1000 miles this year, and I was just about on track, but these 2 weeks off has scuppered my chances. Still, even if I manage 900 miles, that would be a personal record, so I'll just have to see what I can do.

Ah it was all going so well until this weekend. This is what happened.

Last week a running friend of mine from Scotland let me know that she was coming to visit her sister, who lives about 16 miles away from us. So we were emailing and arranging a meet-up, and I mentioned that I was registered for a local 10K on Sunday. To my surprise and delight, my friend made a spontaneous decision to sign up too! I was really excited - what better way to catch up than to run together?!

On Friday morning I ran a very slow and easy 5 miles, clear that my priority was the 10K, but wanting to keep up my recent good weekly mileage. Later that day I felt a little discomfort around my left ankle, but nothing much. In the evening, I noticed that it was very tender to the touch.

On Saturday morning, I woke up with it feeling quite a bit worse. The ankle was hurting now, and I had to walk with a limp. However, Friday had been Robbie's 8th birthday, and we had a long-standing plan with another family to spend the day at Legoland! So that's what we did.

I spent the whole day on my feet, and most of it walking up and down the theme park, sometimes rushing to get to a show. My ankle got worse and worse, and when I sat down in the afternoon, I looked at it and saw to my horror, that it was swollen beyond all recognition. As the say went on, I was aware that I wanted to take my shoe off and not put anymore weight on that leg, but of course that was impossible.

By the time we left, I couldn't drive because I could hardly bend my foot.

By the time we got home (about 9pm), I couldn't walk at all or put weight on the foot. Pete had to give me a piggy back to the front door! It was blindingly obvious, even to a runner-in-denial that there would be no running the following day.

I felt so bad that my friend had paid for and registered for the race and now I had to pull out! I was also particularly gutted because I've done this race for the past 2 years and I really like it. I wanted it to be my first ever 3rd time at a race, and the kids have also done the children's races too. Anyway, on Sunday morning, we went to the race start as planned so Robbie and Emma could run. In the end my friend persuaded her husband to take her place so we could catch up during the race. She said she was feeling a bit concerned anyway, as she had a baby in March and hasn't run as far as 10K since then!

So Robbie and Emma did the 500m, along with my friend's son and her nephew. Then I watched the 10K-ers set off. I must admit, it was pretty sad watching them all run the race I should've been in, especially as the weather was good too. Still, it was great to see my friend and her family.


I rested the foot for the rest of the day, and by Monday morning I was ok to drive to work. Today I've been to the Doctor, and he said it's probably a torn ligament - I was relieved when he said it was unlikely to be a stress fracture - phew! He gave me a long tubi-grip bandage and anti-inflammatories. It's much better than Saturday, but still swollen.

The most frustrating thing is that I don't know how I did it! I am going to get some new trainers though, just in case. The doctor said at least 2 weeks off running, so that's going to be pants. At least the rest of the family is still running...