Here is a quote from my post last January in which I listed my goals for 2013:
'...this year I am setting tougher and more specific goals, and if I don't meet them all, then at least that means they were challenging!'


Those goals turned out to be a bit too tough and challenging and I certainly didn't meet them all...


1. Complete my second Marathon
Of course I managed this one! Having suffered through Edinburgh Marathon in 2010, I almost enjoyed Brighton Marathon in April. It was all down to good training and careful planning. If you have time on your hands, the recap is here.


2. PB at the Marathon
Yes! Originally I hoped for around 4h20m, but as my training went on, that seemed too optimistic and I refined it to 4h30m. On the day I ran with a 4h28m pace band, and got an official time of 4h28m exactly. I'm still basking in the glow of that accuracy.

3. Run 10+ races
Nowhere near! 2013 turned out to be a very quiet year for races for me, and I think I did only 4. There was 1 DNS, due to ankle injury, and that injury also stopped me entering any races at the end of the year.
But on the other hand, I hadn't planned to do parkrun so often. I did 30 parkruns in 2013 - that's 30 5Ks that were not officially races, but were timed runs with other people (so quite race-like). 18 of those were run with Robbie, who surprised me first by being able to run the whole thing, and second by being so keen to keep coming back for more! This was something I hadn't planned but loved doing in 2013.
4. Run 1000 miles
I'm still a bit gutted about this one. I was just about on course to do this in September, as long as I ran 20 miles per week until the end of the year, which I think I could have managed. But then I hurt my ankle, had about 5 weeks off and that was the end of that goal. The final total was 880 miles, which although a long way off my goal, I'm still quite pleased with as it's my highest year yet. Small whoop!


5. Cycle 500 miles
No chance! This failure was mainly down to not having time. The last term of College (Sept - Dec) ended up being really busy for me, and when we added moving house to the mix, I've had very little free time over the last few months. When I was focussed on my running mileage, I didn't have time to cycle as well, and I only cycled a measly 283 miles - significantly less than 2012.


6. Do regular consistent Strength Training
I did this really well while marathon training. Since then though, it basically dropped off my radar as usual.


7. Do stretches EVERYDAY!!!
Again, I did this perfectly up to the marathon. But I did keep doing them afterwards. In the last few weeks I have slackened off a lot, and I dropped from 'every day' to 'after a run', but still, not bad.


8. Keep swimming! Learn to do front crawl and build up to swimming 20+ lengths regularly
No no no. Just no time, and I kept my focus on running. I haven't been swimming for a while now... Must do better!

9. Get a top 3 Age Group Placing
I haven't really done enough races to give myself a chance of this one. Also, I need to do small, local races with hardly any women (and no other 40-44 year olds).

10. Keep Plantar Fasciitis at bay
Yeeees! I'm sure the stretches and strength training helped with this. There's been the occasional niggle, but no heel injury. I did get that ankle injury though, which may also have been an overuse injury, and possibly dure to the marathon.

So there we have it. I missed a lot of those targets, but I suppose if I'd done them all, they would have been too easy. Some of those will definitely continue to be goals for 2014.

Back online - Catch up!

Hello? Anyone still there?

I am finally properly back online since we moved house. All this time I have survived on occasional wifi use at other people's houses, but at last we're fully functioning - hurrah!

So I never got to post about my birthday.

We actually moved house on my birthday, so it was a fairly boring day of cleaning, waiting for removal men and unpacking. But before all that, we had a great morning at parkrun! It was Eastbourne's 100th run, so runners were encouraged to dress up in Christmassy gear. 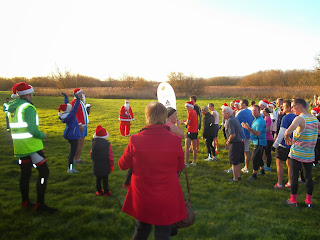 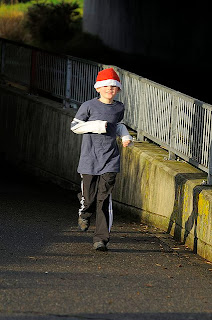 Anyway, before the run, Robbie finally got his t-shirt. This is a prize that is awarded to junior runners when they achieve the milestone of 10 runs. Robbie did his 10th run in mid-September, but it has taken this long for the t-shirt to arrive in Eastbourne! 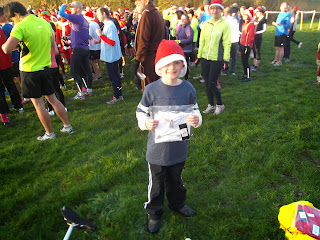 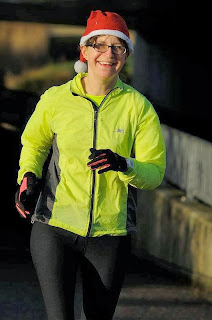 We took it very easy, and finished 141st and 142nd - it was a much larger field than usual! Afterwards there was cake and mince pies to celebrate the 100th run. It was a great birthday morning, although Robbie did try to steal my mince pie - no chance! 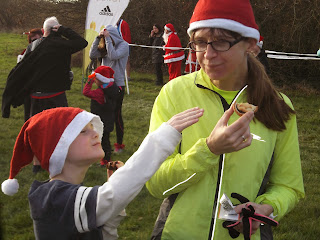