The family that runs together, eats cake together.

This month the whole family has been joining in with running and activity in general. It seems that either a. I am an inspiration to them all, or b. they have given in and realised that if you can't beat me, join me. Here follows a brief recap of our family achievements in March.

1. My last post was about Robbie and I running a new parkrun course, which was on the 1st March. The following day I did my 2nd race of the year, Eastbourne Half Marathon. It was my 3rd year in a row, and my worst time yet! Having run a PB 2 weeks earlier, I was content to take it easy, but tiredness in my legs, the huge hill and a strong head wind all took their toll and I found it really tough. The family was there watching me though, and Robbie and Emma joined me to run through the finish, which was the ONLY reason I was smiling. 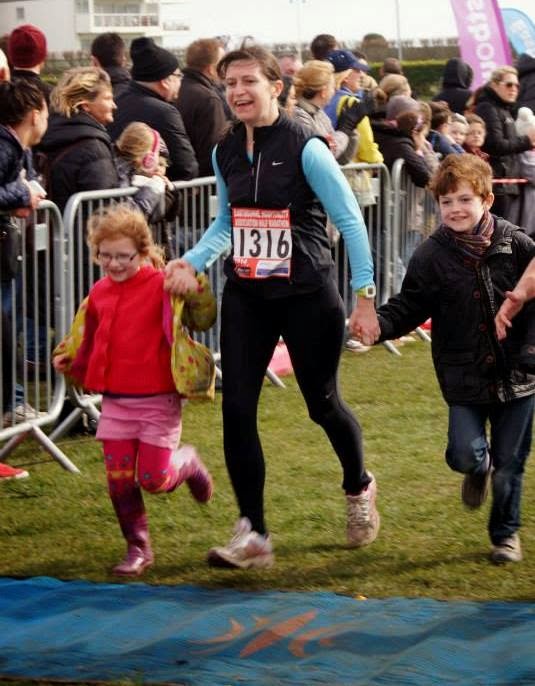 2. On Saturday 8th March, we finally persuaded Emma to join us in a parkrun! Yay! She's only 6, and she did find it a long way, so we let her stop and walk a few times. She still completed the 5K in under 40 mins though, and was not last. She has decided that she will aim to join us every other Saturday, giving herself plenty of rest days! It was great having all 4 of us run together, and Robbie was really sweet, wanting to let her cross the line first.

According to Emma's schedule, we all ran again 2 weeks later, but were hit by cold weather and hail, which she didn't like. She only walked once though, so did really well to keep going. 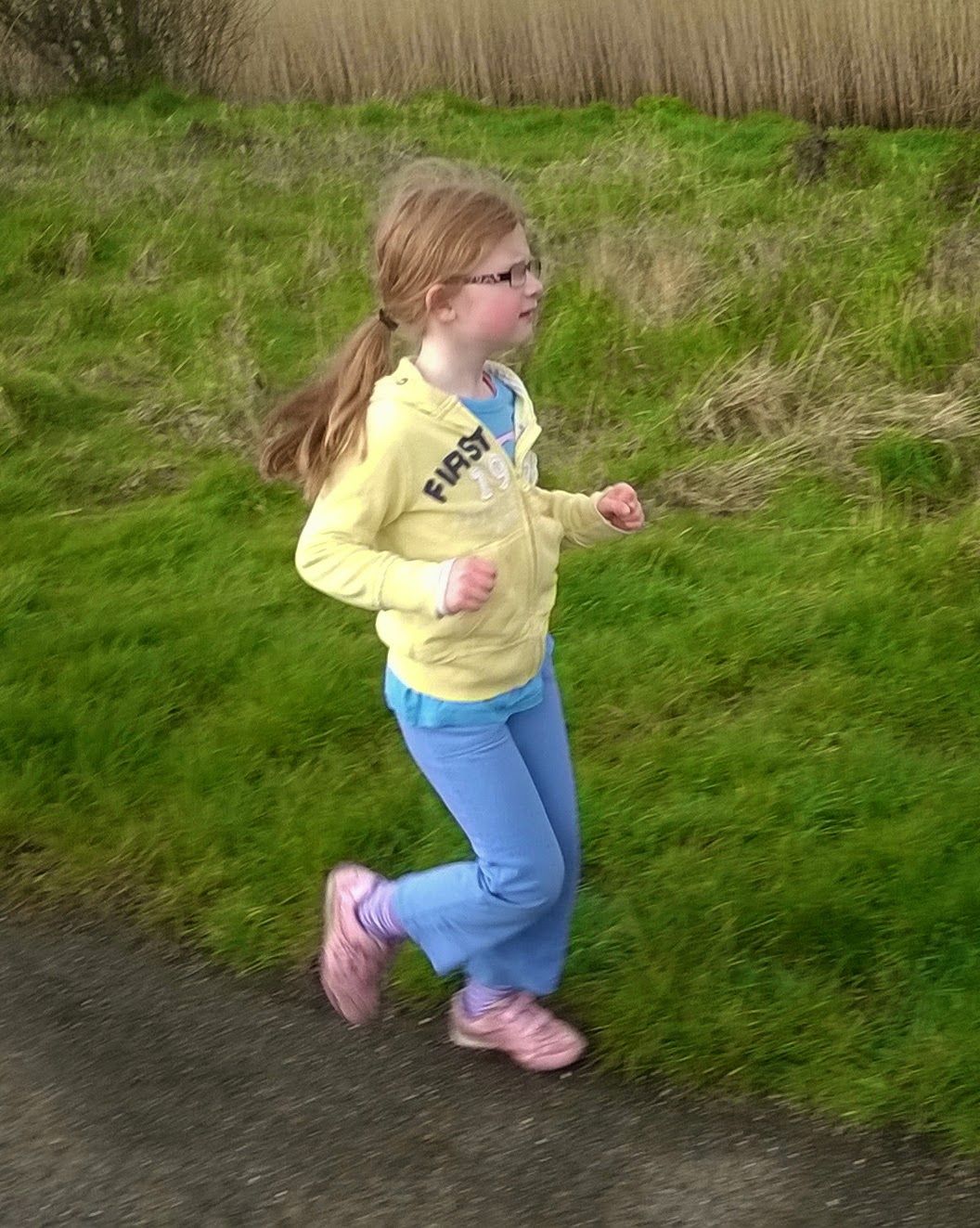 3.The following day it was beautiful sunshine, and we all went for a walk in the countryside. It was just outside our town, and we had a great time exploring up a hill, where we found a nice spot to sit and eat a snack before hiking back. Lovely day. 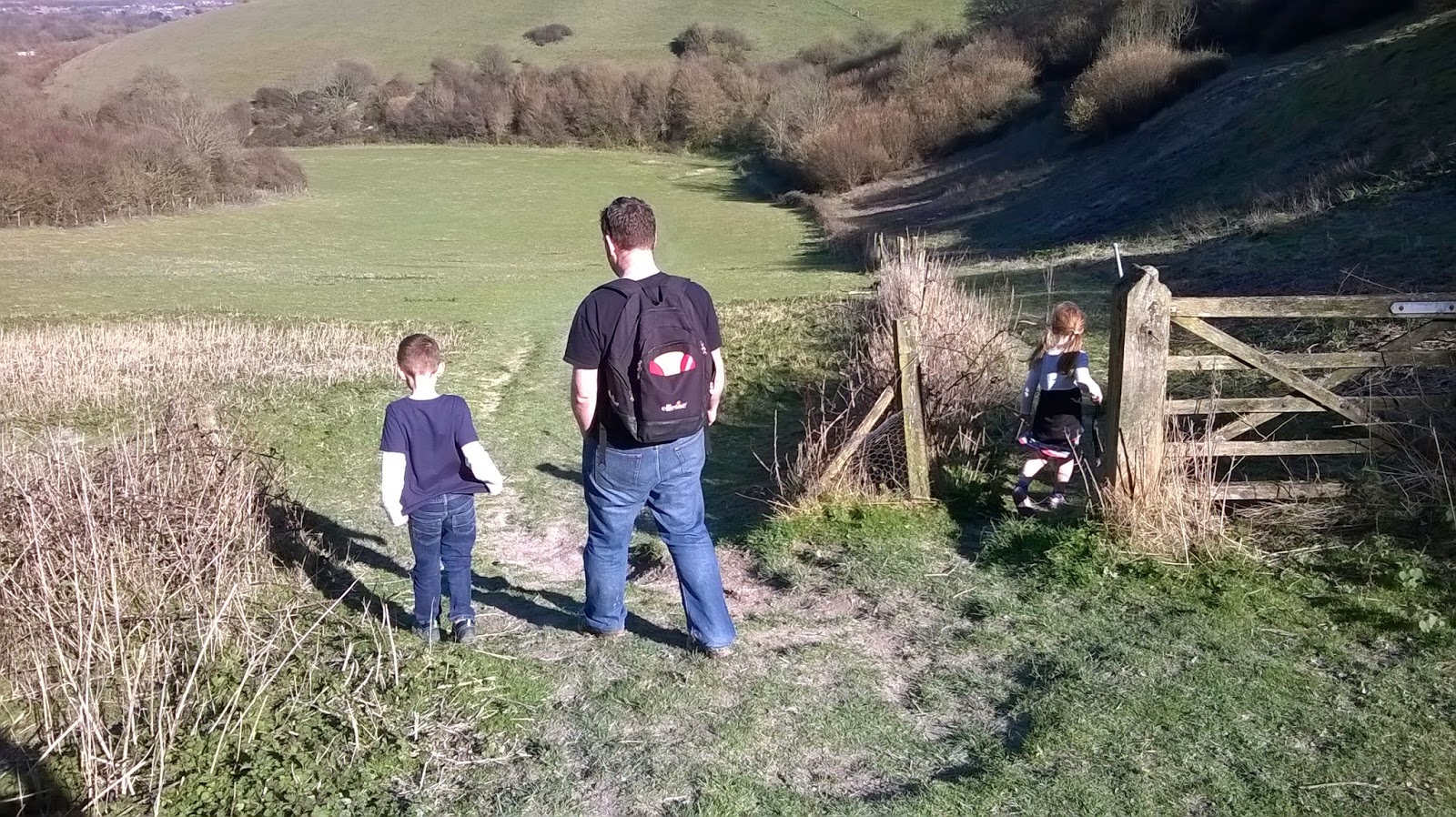 4.  The spring weather has definitely been inspiring us, and last week, Pete decided to take a day off work so we could go for a bike ride together while the kids were at school. We headed East, through a nearby town and on to a country road, which turned out to be popular with cyclists. It was great, we sped along and really enjoyed it. After about 11 miles, we reached a big seaside town, and stopped for a coffee in a museum cafe there with a view of the beach. It was wonderful.
When we headed back though, we found that we had been helped on our way by a strong tail wind, which we now had to battle all the way back. As we went along the coast, it was very tough! We did stop at a pub and get a roast lunch, before making it home. It was about 25 miles in total. I honestly can't think of a better way to spend a day off work! 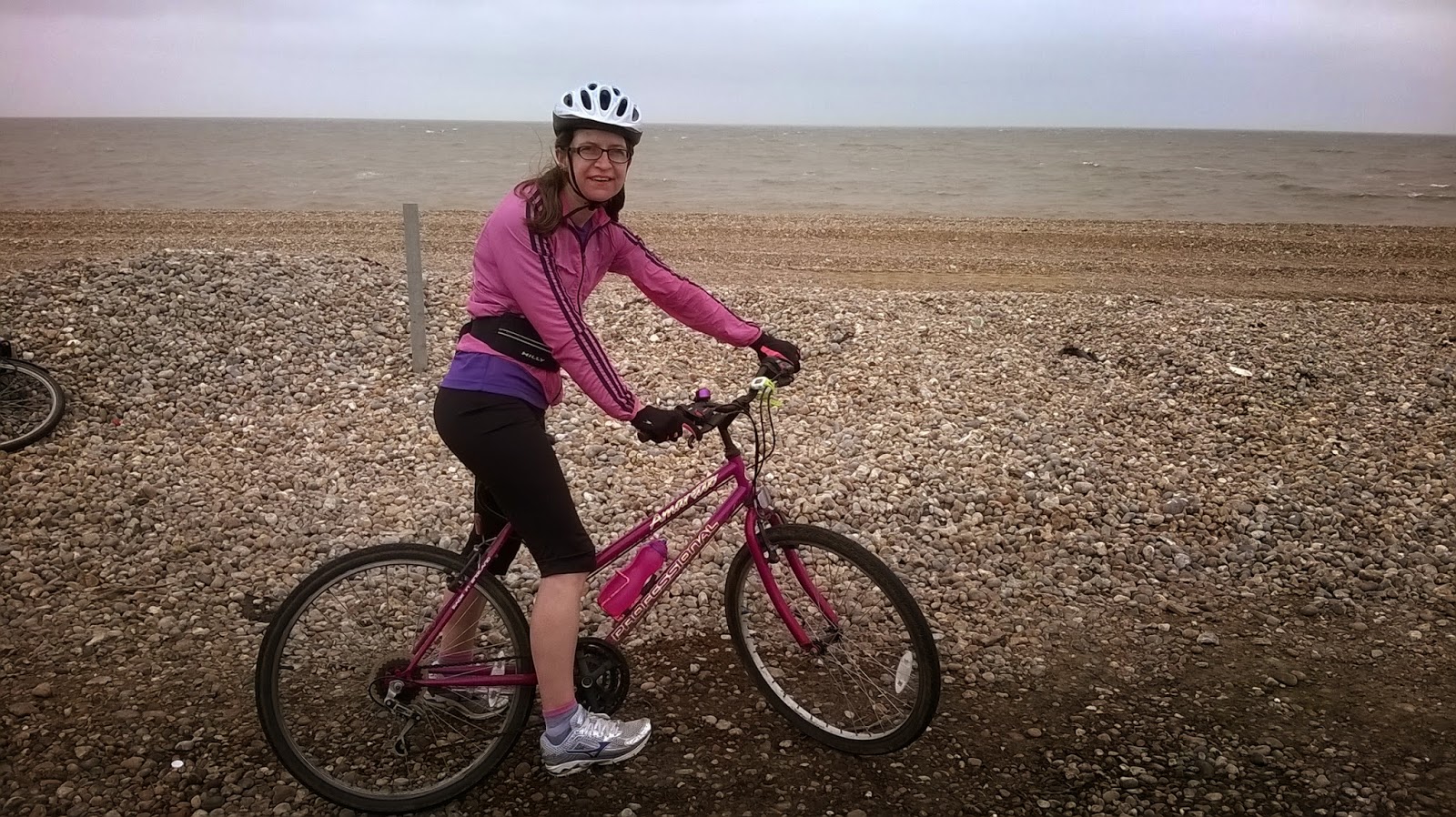 5. Last weekend, it was Emma's second parkrun, and then on the Sunday we took part in a Sport relief mile. This runs every 2 years and we did it last time. You get sponsored to run for charity, and we ran a mile round a race track, so 4 laps. It's not timed, just for fun, but Emma did it all without stopping this time, and they got another medal at the end. 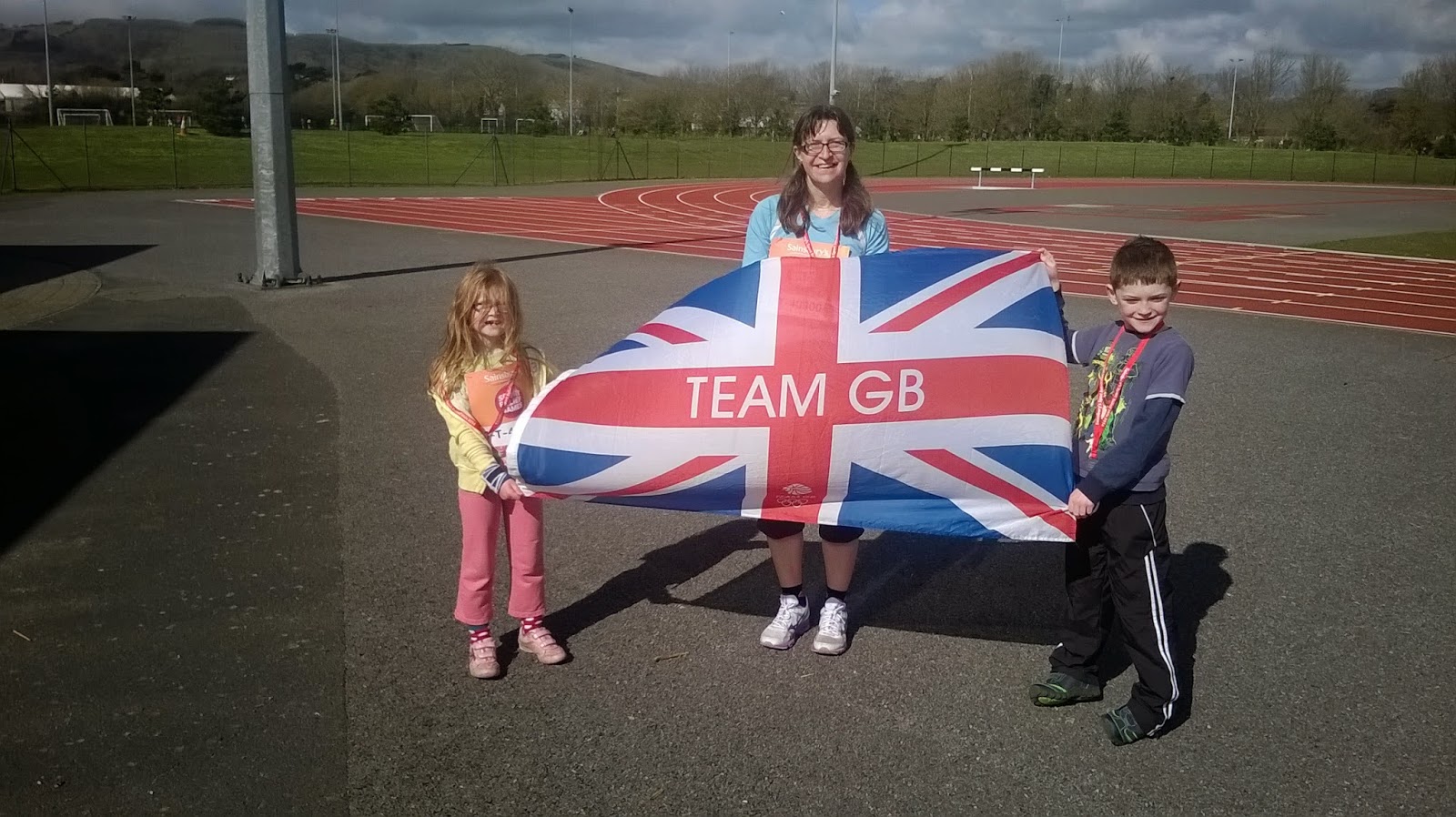 6. This morning, it was just Robbie and me at parkrun. We went at his pace, and my garmin failed to locate any satellite whatsoever, so I didn't know how fast we were going, but we both thought it was pretty speedy. When we got our results later, it was a PB for him by 1 min and 10 secs, beating his previous best time from November! Amazing! We ran 31m12s, and it was also my 50th parkrun. This means I should soon be seen sporting the appropriate red 50 t-shirt. It was Robbie's 25th run, so he's not far off either!
Posted by Liz at 22:28 5 comments:

Last weekend I managed to tick one of my goals for this year off my list. Robbie and I ran a different parkrun!

We were in Pete's home town for the weekend, and drove down on Friday evening, which meant we were there and ready on Saturday morning for the run. I had planned ahead, and brought our running stuff, but early on Saturday, Robbie was almost tempted by the lure of a cafe with Grandma and a chocolate treat. Pete and I spent a few minutes convincing him that he should do the run, and that he'd feel pleased with himself afterwards, and eventually he agreed to come with me.

Robbie has now done about 22 runs at our local parkrun, but this was his first at a different location. It was very different! It's in a country park, and on path, grass and - that morning - a lot of wet mud. It also included quite a long uphill, and then downhill. Robbie is used to running on a gravel path which is completely flat, so I thought it might be a challenge.

I had to ask someone to show us from the car park to the start, and we chatted about the course. When we got to the start, a few people asked where we were from and everyone seemed really friendly. It was the Queen Elizabeth parkrun (in Queen Elizabeth Country Park), and has been going for less than a year. There were about 40 runners altogether.

It started with a run up the hill, then we turned and ran downhill, where it was very muddy, and very slippery. I think Robbie coped better than me, as I slipped a few times, and then was wary of falling or getting injured. We ran a short loop, then it was the hill again, but further up this time. Robbie did really well! I preferred the hill to the mud at least.

We reached the top of the hill, then ran down into mud again, and along a very muddy stretch to the finish. We had to stop and pick our way through the really boggy bits at times, and I didn't really enjoy that part as I just couldn't run through it.

We finished near the back of the pack, but although our time was slow - just under 36 mins - it was still faster than Robbie's first 4 parkruns on a flat course, so it shows how much progress he's made!

We were so muddy afterwards that I ended up buying him new shoes that afternoon! The photos were posted on Facebook by the photographer, and I think they're really nice ones of us running together. I might try that parkrun again when the mud has dried out, and we'll definitely hope to do some more in different places!