For the last few years since I started running and blogging, I've always begun each year with a list of goals. I've had clear ideas about what I want to achieve and I've always managed to do at least some of those things. It's been extremely satisfying looking back at those goals at the end of a year and ticking things off the list.

This year though, I've been at a bit of a loss. Obviously I'm blogging a lot less these days, (due to other demands on my time), and that's made me less motivated to list my goals. In addition, I had such a good year of running last year, with a couple of hard won PBs (Half and 10K), and my highest ever mileage.

I've also been feeling as though I'd like to aim more for general fitness this year, rather than a narrow focus on running. Having finally achieved the goal of 1000 miles in a year in 2014 (after a few failed attempts), I'm not putting any pressure on myself this year to run far. In fact my mileage this January was 57 miles, compared to 70 miles in 2014.

Hopefully this can mean more time for cycling, swimming and core / strength work! (I must admit though, over the past couple of weeks I've really started enjoying my running, so I might change my mind again - ha!).

So over the last few weeks I've set myself a couple of mini-challenges.

1. Complete the 30-day shred!
This is the DVD I first did about 5 years ago, Jillian Michaels series of 20 minute routines incorporating cardio, strength and ab exercises. I decided to go through the whole 30 days, from level 1 to level 3, to improve my muscle strength and core stability. While I don't do every exercise as hard or for as long as recommended, I find most of it a do-able way of firming and toning up. I did it almost all the way through, but after experiencing some shoulder pain, I stopped with a few days to go. However, my biceps are like rocks and my flabby Christmas stomach has almost disappeared - result!

2. Stop eating chocolate!
Although I personally know people who have successfully given up chocolate or other sweet treats without resort to murder, I consider myself to be a serious chocoholic. Since I was a child, I can't remember ever going longer than about 48 hours without chocolate (and I usullay eat chocolate every day). But for some stupid reason, on 1st February, I thought I might try going without for a whole month just to see if I could. (Cleverly, I picked the shortest month of the year - January would have been far too long). It's been 3 weeks now, and with the help of substitutes such as plain biscuits and flapjacks, I've almost managed it. It's not been too bad, and for the most part, I have tried to eat more healthiliy overall, (although last week was half term and the kids and I indulged a bit too much).

The other February focus has been Brighton Half Marathon. About 2 years ago, a friend of mine (S) decided she wanted to run a race and raise money for charity. Her daughter, (in my daughter's class), has Cerebral Palsy, and she wanted to support SCOPE, a disability charity. She was not a runner at that point, so we started going out together, run-walking, and building up to about 3 miles.

Then she got pregnant with her 4th child - surprise! I ended up running the Half alone last year (we'd both already entered), and got my PB there. Meanwhile, S had a little girl in January.

Last summer we started training again. S built her running up again, and with a couple of other friends joining us we did lots of running round our home town, and S completed her first race with a 10K in October.

Gradually we added miles to our long runs. It wasn't easy as S has 4 children, aged 1 - 7 (including one with special needs), and 2 jobs, one of which is working late hours in a restaurant. She managed some of those long runs after working late the night before and getting only 4 or 5 hours' sleep.

After so long in the planning, the race finally rolled round yesterday. It was a lovely sunny morning, and we chatted and enjoyed the atmosphere, which was fantastic. It wasn't all plain sailing - S stopped for a loo break at about 7 miles and we lost at least 5 minutes while she queued for the loo. Then she started to struggle around 9 miles and nearly started walking, but I persuaded her to keep jogging. Then she totally amazed me by getting a second wind around 11 miles! We sped up and almost sprinted to the finish!

It felt so emotional to finish together, especially as it had been so long in the planning. We did it faster than I'd expected in 2h36m, and S raised over £300. With all her comitments I was really pleased for her, and today she's already talking about doing it again next year! 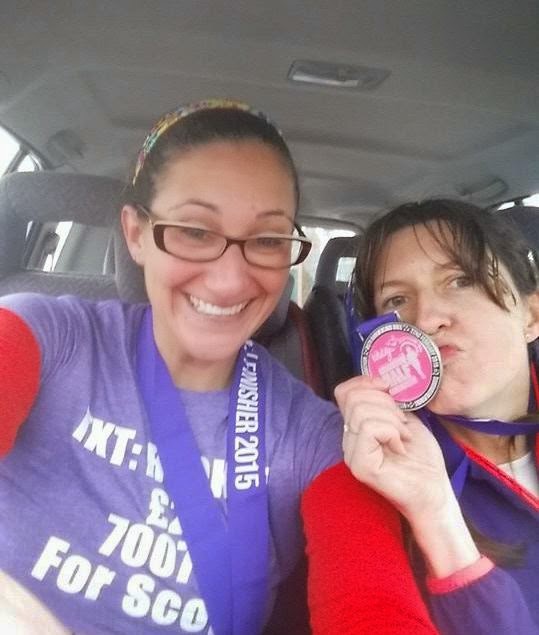 As for my next challenges, I'll be chocolate free for another week, and then I'm running another Half next Sunday. I'm only doing it as some other friends are running, and because I've done it for the last 3 years in a row and I'd like to keep that up.

Then I'd like to look at my 5K PB. I can focus on that without haivng to do lots of long runs, so it should fit in well with doing other things too. I'm going to try to eat more healthily too, and fully intend to go for a swim one of these days...
Posted by Liz at 13:08 5 comments: