Races with a difference

This month I've done a couple of races but neither of them have been PBs and in fact they both involved running well within my comfort zone. The first was run with friends and the second with my husband, and they were both great experiences.

On 12th October there was a local 10K organised by a new-ish local running shop. There were 150 runners, a few marshals and it was run along the seafront. Over the summer I've been running with a couple of Mums from school, both of whom are quite new to running. One used to run a bit as a teenager, and she's pretty speedy, but the other had a baby in January, has never run before and is juggling trying to get fit with 4 kids and a job.

So they both decided to enter their first ever race with this 10K (my 10th 10K!). I was a bit concerned that we might actually be last as it was such a small field, and we almost were! But all our families came to see us and the kids played on the beach with their Dads while we ran.

It was all very sociable as I saw a few runners I knew including parkrunners and one of the teachers from school! We called out to people and the three of us chatted away as we ran the whole thing together. We also met a 75-yr-old man who told us all about his running past and the fact that he races every weekend and travels with his wife to do so. Our pace was 10.47 overall, which is quite a bit slower than my marathon pace, so obviously it was very comfortable.

It was tricky at times to keep to that pace, and I had to keep holding myself back to help my friend who had never run further than 5 miles before.

But it was really good fun and nice to do such a sociable event!

We finished in a time of about 67 minutes (only about 5 or 6 people finished behind us) and got a medal at the finish. I was very proud of my friends for completing their first race and furthest distance!

Then 2 weeks later I had a very different race - the Great South Run. From 150 runners to 25,000, and this was televised with an elite field and a completely different event!

Pete and I had planned to run this together a while ago, then he hurt his ribs on his bike and couldn't run for a few weeks. He did very little training, but managed an 8-mile run a couple of weeks before so decided to do it.
He decided that we should run nice and easy miles up to about mile 7, then step on the pace if he felt ok at that point. We started right at the back of the last group to start, and put in a couple of miles around the 11 min mark. In fact we even had time to stop for a tourist pose as we ran through the historic dockyard and past HMS Victory!

It was so crowded we were constantly having to dodge people and run around them, and there were walkers right from the start. But as the miles went by, we were feeling fine and doing about 10.30 min miles. When we got to 7 miles, Pete said he felt good and we started to speed up a bit. We ran mile 8 in 9.52, then really started to get faster.

It was good fun as we sped past most of the pack and we both had plenty of energy left. Mile 9 was 9.16, and the last mile we ran in 8.24! I think Pete was much fitter than he thought and could have run a lot faster overall if he'd wanted to. But it was his first time running 10 miles, so our finish time of 1h47m was pretty good! (Only 20 mins slower than when I ran it 2 years ago!). 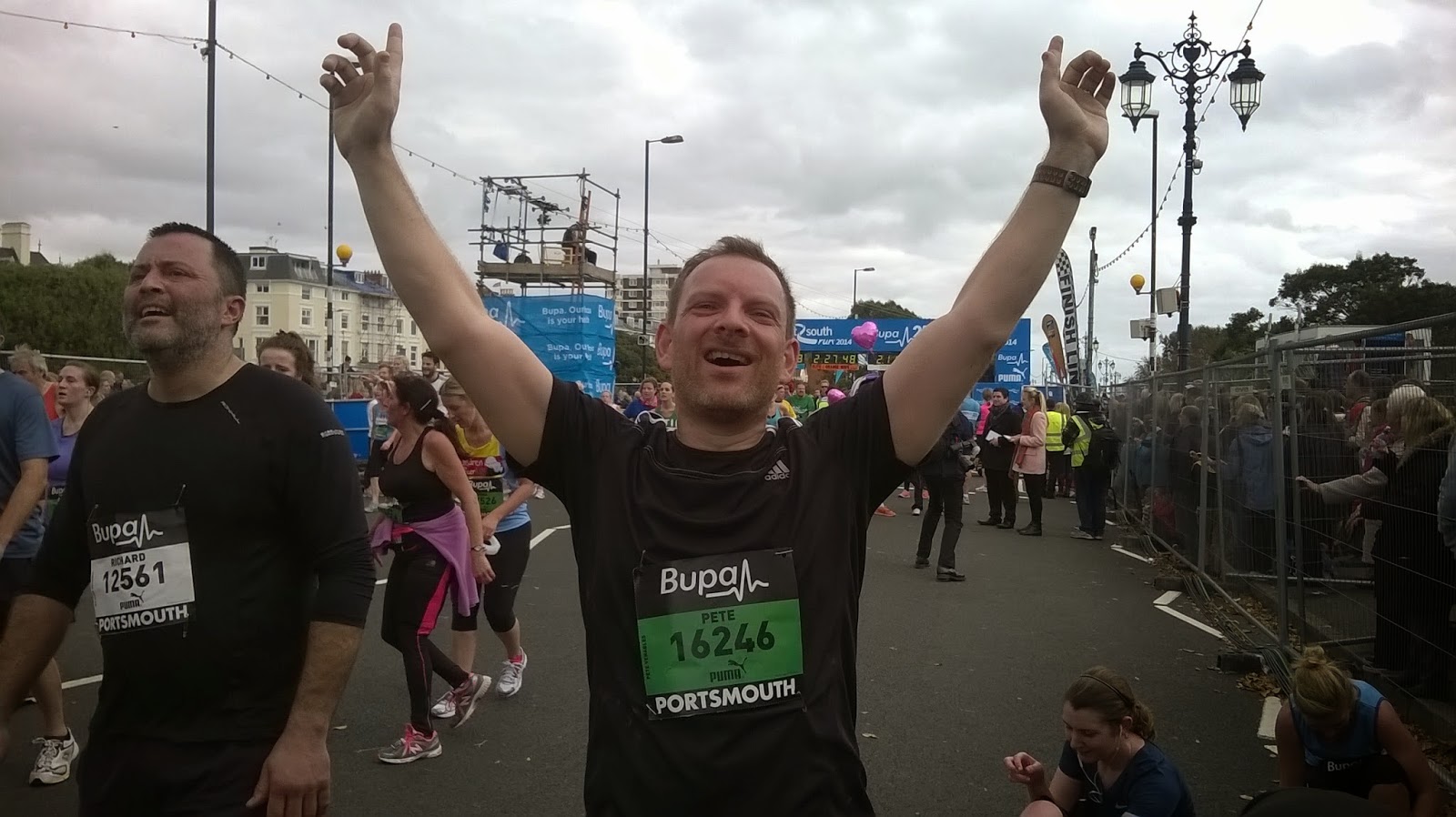 In November I'll be running a 10k at my own pace I hope, and making my second attempt at a PB (after failing to get one in September). I'm looking forward to pushing myself in that one!
Posted by Liz at 09:52 4 comments: