That was a slightly longer break from blogging than I had intended, but that's because it's been a much longer break from running than I had intended. My last run was on 13th July, and that was followed by a little spate of feeling most unwell. After a few days of crappiness, we headed down South to stay with Pete's parents while he went to work at his new college in Brighton, and I went house-hunting.

While we were there, I developed a cough, had a few cold symptoms, and ended up not doing any running. Then we came back, and I still had a bad cough, and was busy with a few days' work, so I still didn't do any running.

Finally on Sunday, I laced up my trainers expectantly and started out for a run. It was a cool, cloudy morning, and I was really looking forward to being outdoors in the fresh air. However... I got to about 0.4 miles and felt terrible! I kept coughing, I had a stitch, and my legs felt like lead. I stopped and stood there for a moment, just wondering what was the best thing to do. In the end I ran a little further, then gave up, turned around and came home.

I felt really pissed off, as I had really wanted to enjoy a good run. You know that fantastic feeling you get when you have just had a great workout? I wanted that, and a 1 mile jog wasn't going to give me that buzz. A little while later, the kids went out on some grass in front of our house to play on their bikes, so I went out again and jogged round and round them for 10 minutes. This got my total up to 2 miles (in about 20 mins...).

There is a temptation to try to find one good reason (or excuse) when a run goes so badly wrong, but I think there were a few here. The cough kept stopping me, and I was too out of breath, but I also felt really tired, probably due to a few late nights. The stitch came from drinking too much water, and I may have lost some fitness in 3 weeks off. I'll try again later in the week, as the cough is getting better, but I really need to shake it off completely.

Anyway. What are the positives from the last few weeks? Well we've got somewhere to live down South! I found a house in a small town about 20 miles from Brighton and Pete's new job. We will be renting for the moment (as we haven't sold our flat here yet...). I'm quite excited as it looks like a good area to live in.

We've had some sunny summer weather! Ok, so it peed with rain all day today, but down South and back in Scotland we had a few good days when we actually needed to apply sun cream. Last week we spent a day by the sea, and all Robbie wanted to do was clamber over rocks. This made me chuckle as it was one of my favourite holiday activities when I was a kid too. 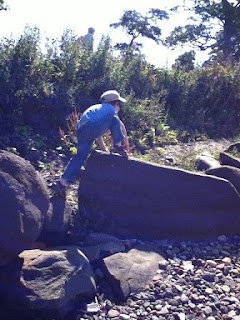 Another day last week, we went for a picnic in Edinburgh. When we left home, it was cloudy and cool, so I didn't bother with hats or sun cream. When we got into the city though, it was roasting hot (that's about 24 C in Scotland), and we had to find a shady tree to sit and eat under. We were in the park next to Arthur's Seat, an ex-volcano that is no longer in the erupting trade, but has gone into business as a good hill to climb for a view over Edinburgh.

I thought we might wander a little way up the neighbouring hill (smaller), but Robbie insisted he wanted to climb to the top for a good view. 'Well we can start', I said, 'but you know in a minute you'll be moaning that you're tired and you've had enough'. To my amazement though, we walked all the way up with no complaining whatsoever. Emma did brilliantly for a 3-year-old, despite it being hot and sunny, and me having brought no water. Oops. They really enjoyed it though. 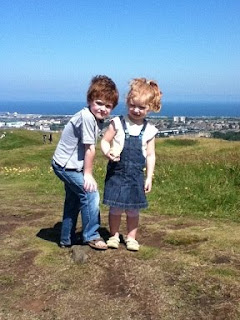 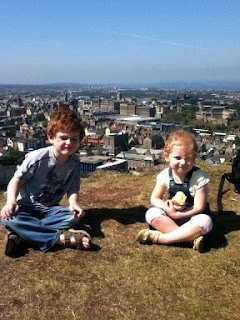 Then last weekend, we took the stabilisers off Robbie's bike. He has seen smaller children cycling around on 2 wheels, so he wanted to have a go. Pete took him out on the grass at first, then we all went for a wander down the cycle path behind our house. He got the hang of it pretty quickly and was soon racing up and down. He's still having a bit of trouble getting started - especially if he's going uphill - but he's getting there. 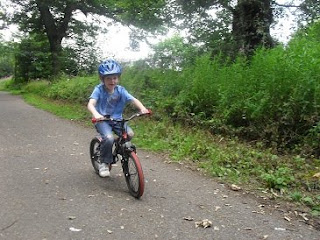 So we've only got about 3 weeks left until we move! I can't believe it. I'm hoping I'll be able to run a few of my old favourite routes before we're off...
Posted by Liz at 20:05