As usual I'm not really following a training plan in the build up to my 2nd marathon. I've just never found a training plan for any race that fits neatly into my life. I've tried to look at the key components of various plans and put them together in a way that seems effective but also fits into the time I have.

So the long run is really important. I'd like to be averaging a higher weekly mileage, but I don't think that's quite as essential as the long run in terms of me being able to get round the course. I started a bit behind in January, so I've had to increase each long run by a couple of miles most weeks.

Last week I ran 12 miles, which was fairly tough, and this week I had planned 13 miles, but when Friday came around I decided to push it to 14. It's only 9 weeks until the marathon, and I've got a half-marathon in there too, so I haven't really got much time to get to the really long runs.

Anyway, I had a pretty good run on Friday. To my great delight, it was a beautiful sunny morning. I was happy to get out there, although it was still reasonably cold, so I kept my gloves, long trousers and long sleeves on. The day before, I realised that this was to be my longest run since 2010 (when I did my other marathon). In the last 3 years I've run 3 half marathons and a 10-mile race, but never as far as 14 miles. This meant I didn't have a route that I'd done before, (as obviously in 2010 I was doing all my long runs in Scotland).

But, inspired by the weather, I had a brilliant idea. I decided to run to the beach. This isn't as obvious as it sounds, as it's in the next town, and by the most direct route, about 5 1/2 miles away. So it would be pretty pointless going that far for any shorter run.

This was perfect though. When I hit the seafront at 5.45 miles, the sun was out, there was hardly any wind, it was around lunchtime, and there were quite a few people strolling along the beach. I got to jog along the path for about 1 1/2 miles to the pier, then turned round and ran back in the other direction. 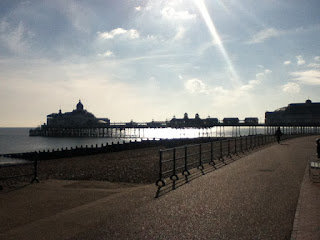 It was lovely to run along the beach, and this was also following part of the route for the half marathon  I'll be doing in March. I really enjoyed it, and although the last 3 or 4 miles were on very familiar, rather boring paths and roads, I found the whole run very achievable. For some reason I was very confident that I could do it, perhaps becuase I've done all these distances before, even though it was 3 years ago. I've done a lot more running since the last marathon of course, and I suppose all the other 10 mile+ runs and half marathon races have made me stronger.

Anyway, I was pleased to get that run done as always. The following day I decided to parkrun, which was a rather tired 5k. I have some idea that a little run less than 24-hours after my long run might be helpful in building stamina.

There's always such a great feeling after completing the week's long run, as you feel as though you've really achieved something. However, within a day or so, you start thinking about the following week, and the feat of doing it all over again but longer! 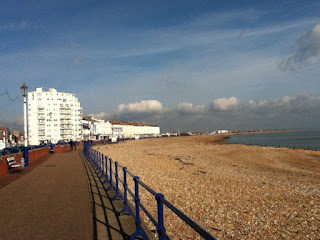