So this summer I started thinking about my 10K time and thought I could probably run faster than my PB of 51m17s. I did a bit of speed training (only a bit of intervals and tempo runs) and in September decided to go for a sub 50 mins 10K. I attempted this in the Bexhill 10k, but for various reasons, I ran neither sub 50 mins nor a PB.

Shortly after that, I entered the Brooks Brighton 10K - a much bigger race with over 3000 runners, but a flat one, all along the seafront in Brighton. A few days later, a friend (V) entered too. She has been running less than a year (although she's very fast), and this would be her first real race.

My plan was basically the same as it had been in September - start at about 8.03min miles and try to hang on. I wasn't interested in a 52 min run, so I was happy to either get a PB or crash and burn (e.g. 56+ mins) trying! I knew I had to go for it from the start and run consistent splits.

I'd never done this race before, and hadn't realised how big it was. At 9:30am yesterday (16th November) just over 3000 of us lined up in the start area and we were off. There was a bit of jostling and our speed was often controlled by people in front of us. V decided to try to keep up with me, but we thought we would probably lose each other in the crowd during the race.

The route was east along the seafront for about 2K, then turn around and run west on the same road for about 6K, then turn again and finish where we started. As it was so flat, the biggest issue would be exposure to the wind along the sea, but luckily for us, it wasn't too windy at all.

Because of the route (people running back towards us on the same road), it got very crowded at certain points, and I was frequently frustrated at having to run around people. Despite this, V and I managed to stick together most of the way, and whenever I lost her among other runners, she eventually re-appeared behind me!

I felt strong, (if a bit asthmatic) as the miles went by and I was keeping a constant eye on my garmin. The first mile was 8m02s, and from then on, my average pace was usually between 7m59s and 8m04s. Whenever it dipped below 8m, I reigned it in and tried to keep consistent. There were some km markers along the route too, and every time I saw one I switched my garmin display to overall time, and made sure I was always on target. At each km marker I was about 3 - 5 seconds inside 50min pace! I really was totally reliant on my garmin for the whole race.

As we got to about 8K, I knew that I just had to keep going at the same speed and I should make it, but I just didn't know how accurate the garmin and the km markers were - it could be a matter of a few seconds that would be the difference between under or over 50 mins! In the final km I could see the finish approaching. I was so tired and at times I closed my eyes for a couple of seconds so that when I looked up the finish was a bit closer!

A few hundred metres from the finish I knew I was close to 50 mins, so I really dug in and tried to speed up. It was only at this stage that V dropped back and I finished a little way ahead of her. I crossed the line, paused my garmin and crouched down to catch my breath. I was knackered, but my watch said 49m26s - YES!!! Pure happiness.

Very happy with that. We didn't take any photos and the official ones aren't out yet, so here is a picture of the rather nice medal! 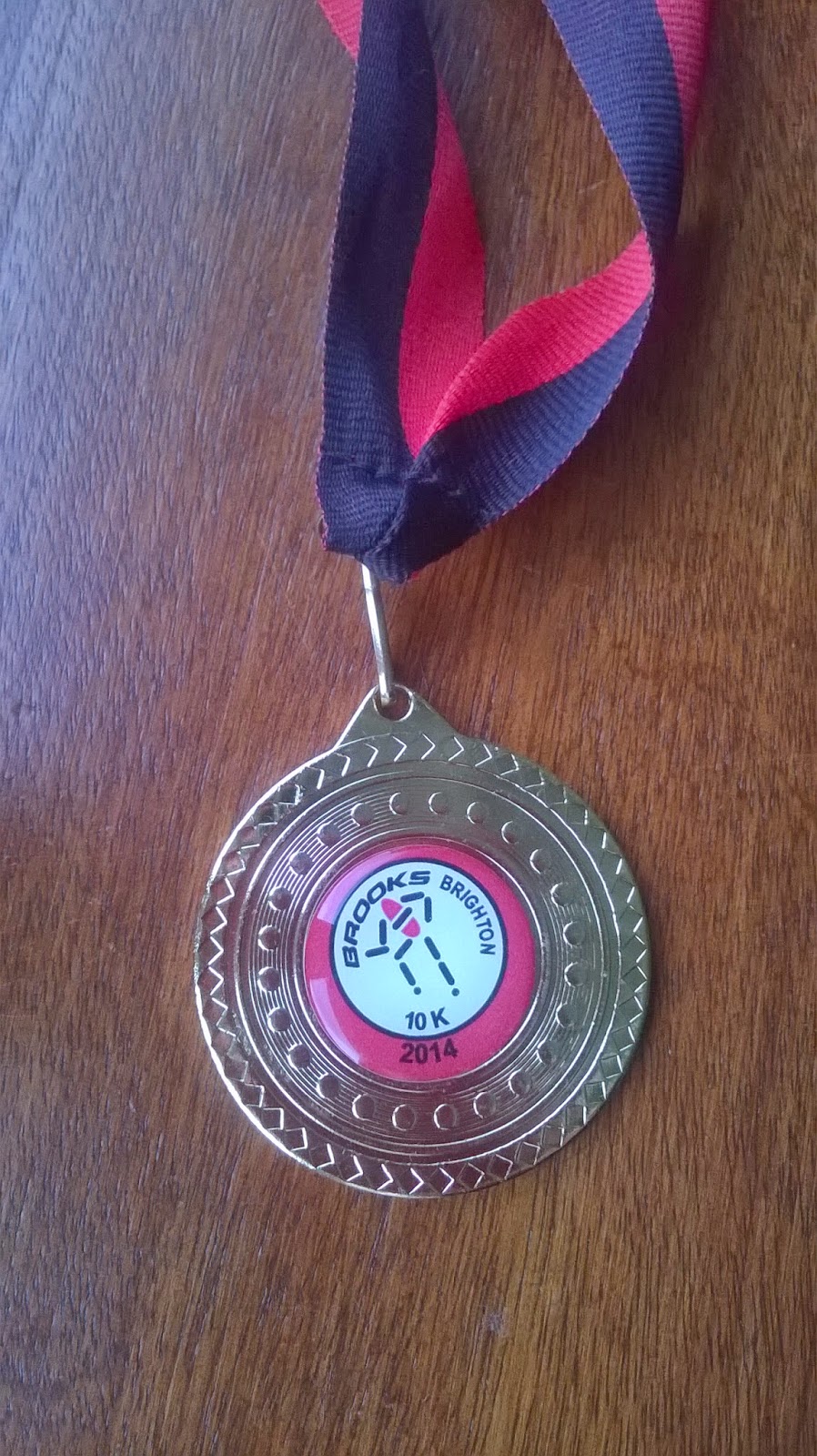 I'm going to take it easy now for the rest of 2014, and aim for slower runs but keeping the distance up. The question now of course is whether I can go any faster next year?!

PS, when I got home, the kids had made me a card to congratulate me on my PB! 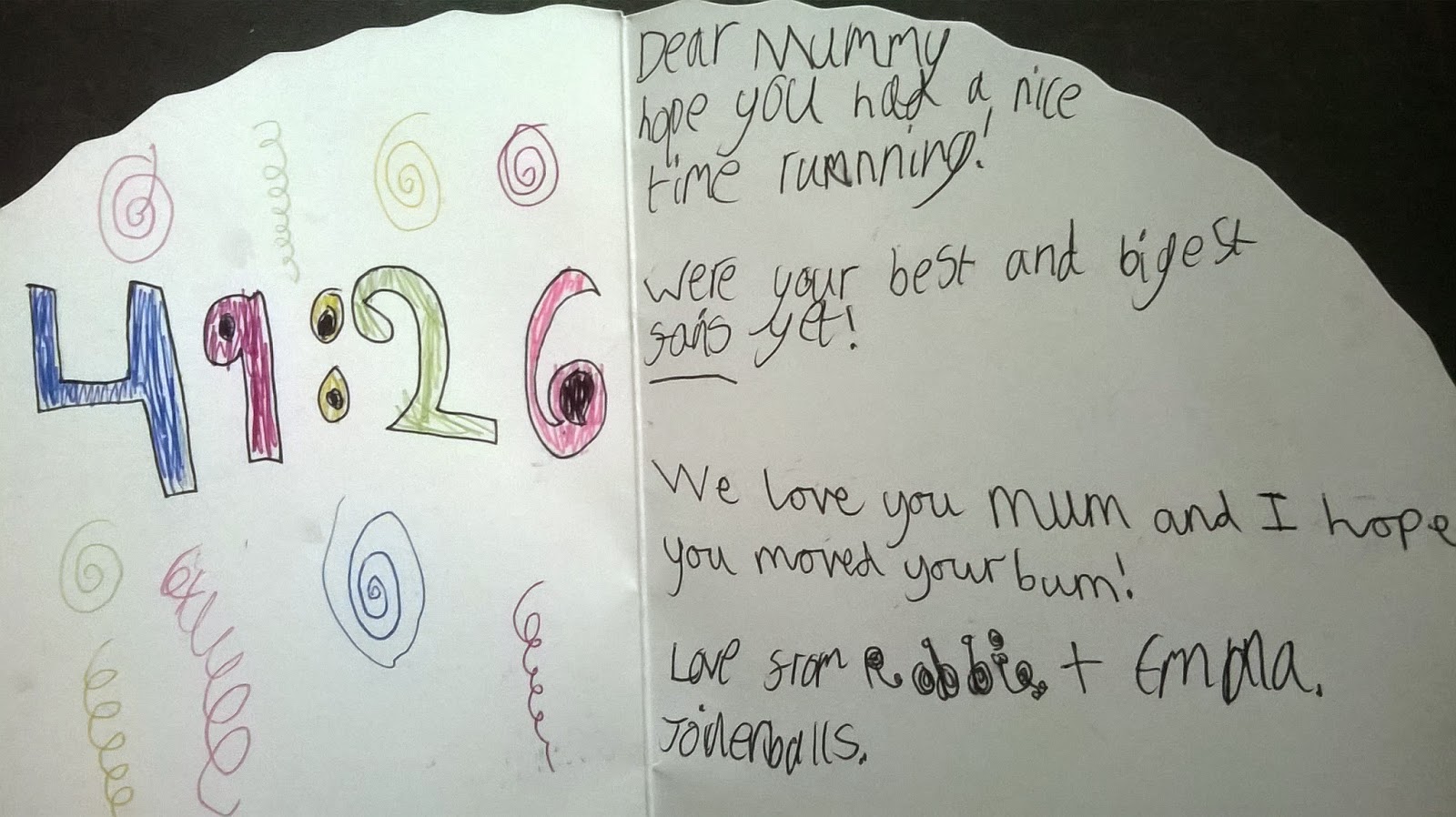