A run, an ex-PM and a tooth

After a wee 2-mile run on Friday, I was planning a longer run on Saturday morning, but that plan fell by the wayside when I woke up with a dodgy stomach. The kind where you can't go for a run unless you wear a nappy. :-( Hopefully that was the last in this little series of illnesses...

Happily it didn't last long, and on Sunday I was aiming for 8 miles or so, as I haven't run further than 6 since a 10-miler five weeks ago, and I have got a half marathon coming up after all. We had plans for Sunday, including a family trip to the cinema, which meant I had to be back before 10am, and I realised I'd have to shorten the run a bit.

I started off feeling pretty crappy as usual, and plodded along at no great pace for the first few miles. I started to feel a bit better, and then came to a huge hill - I knew it was coming of course, but it slowed me right down. Then, at the top of the hill, I had run just over 6 miles, and finally started to feel really good. My pace sped up and I felt strong, and I sneaked in another mile.

It usually takes me about a mile to get into a run, and I'm used to feeling a bit uncomfortable for the first 10 mins, but the first 5 miles?? That's too far for a warm up. Hopefully I can sort this out with more regular running - I'm really hoping to get back to 4 runs a week from this week.

That was a 15-mile week, which is the most I've managed this month, and something to build on.

In other news - we saw 'How to train you Dragon', which was great, and Robbie got his first wobbly tooth during the film! We met friends for lunch, then went to a big park in Kirkcaldy, where we bumped into none other than Gordon Brown, whose kids were on the same slide as mine! I decided against approaching him with any political advice, and we observed from a polite distance, as 2 burly minders hovered nearby.

This morning, Robbie got out of bed clutching his tooth, which he had managed to poke out with his tongue. He informed us that the tooth fairy will be leaving him 'a gold coin'. We'll have to see about that... 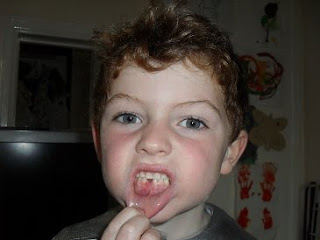