Last month was HOT! After a lot of rain we finally got some fantastic sunshine and warm temperatures. The trouble is, that might just have been summer and we're heading for autumn already.

As for running, I started off slowly, with a few extra rest days over the May Bank Holiday, but started to build it up again in the last 2 weeks.

At the start of the month I did the Hampshire 10K in Portsmouth (when it was still cold and rainy), and banged out a great new PB. I also did one Parkrun, but ran it as an easy training run rather than a race.

Then it got hot and I managed to get sunburnt while cycling to the beach. On that bike ride I came up with a great idea - how to stop your Garmin getting sweaty and leaving a tan-line on your wrist: 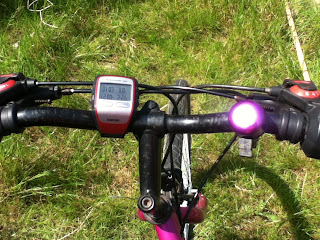 This weekend I've got a race, as jubilee fever hits the UK and we get a double Bank Holiday. It's a 5-miler, accompanied by children's races, music and food stalls. I'm doing it for fun, rather than with any time goal in mind. It's also Half Term next week, which leaves me with 9 consecutive days of having the kids around - hopefully I'll sneak some running in somewhere.
Posted by Liz at 21:41