On Thursday I found myself having to unexpectedly squeeze in a cheeky 20-miler. I had planned to do it on Friday (with an extra day's rest since the last one), but then I was asked to teach. We'd planned to go away for the weekend so that was out too.

I tried to psyche myself up for it, but I when I got up on Thursday morning, I just wasn't feeling it. I was tired and lethargic, and I just didn't fancy spending over 3 hours outside in the wind. So I set off with the clear idea that I could always cut it short - preferably no less than 16 miles, hopefully 18 if I could keep going.

It was really cold (no sign of that changing yet) and windy. The first few miles were into the wind, and I had no problem sticking to a slow pace. My last 20-miler the previous week had been at 10.21 min mile pace, so I was aiming to be only a little slower than that. The cold encouraged me to speed up occasionally, as I spent the first few miles just looking forward to it being over.

At about 4 miles I stopped to get a quick picture as I ran past our local castle - nice route! 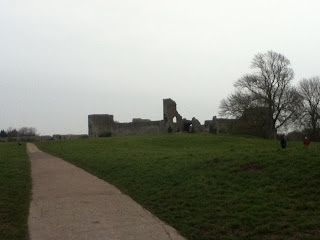 At about 7 miles, I started taking the sports sweets that will be given out in the marathon - I thought I should try them. I washed them down with water. I wasn't feeling much better yet.

At 9 miles I decided to stop in a public toilet. I didn't really need the loo, but it was a shelter from the cold wind! I ate some more sweets and drank water, and stopped for a few minutes. Then I pushed on along the coast. It was really cold here with the wind coming off the sea, and my fingers were numb. Around 11 - 12 miles I remember seriously planning how I could alter my route, and wondering how short I could cut it. Working out the distances in my head was a good distraction from running.

Then at 13 miles I came to another toilet. I went in to finish my sweets and drink. I coudln't bear the idea of taking my gloves off outside!

I plodded along, not feeling much better, but starting to think that I could probably make the whole 20 miles if I just stuck at it.

Then, at mile 15, my podcast finished. I had listened to 2 podcasts about running, which had kept me company, but on a whim, I decided that for once, I would put some music on. I put my running playlist on shuffle, and out blasted some fast, uplifting tunes. I started to run with renewed enthusiasm.

I've often been amazed at the difference a bit of music can make to my speed, and this time it just lifted my mood completely. My last few miles had been over 10m30s each, but now I put in 2 miles at 10m18s pace. I suddenly felt so good! With the help of Britney Spears, Jon Bon Jovi, Brad Paisley, Huey Lewis and many others (it's quite a mixture on that playlist), I started enjoying myself.

As I ran along a quiet path through a park, I was singing out loud and putting in the odd dance move. My 17th Mile was done in 10m10s, and my 18th in a ridiculous 9m58s - I almost wept with joy as I saw that one on the Garmin!

I have never finished a long run like that. All my runs over 13.1 miles I find tough, and I usually drag myself home after 15 miles or so. Of course I was still aching all over and my legs were dead, but I just had this spring in my step that I usually only find in shorter distances. I did mile 19 in 10m07s, and came down the road to my house in an unheard of and frankly insane 20th mile of  9m36s!!!!

Wow. It's incredible how much power your mind has over your body. The music just made me feel so much better, and able to push myself in a way I've never been able to before. Of course it might also have had something to do with the energy sweets - I'll be using them again!

Although I didn't enjoy most of the run, I finished feeling that it had been outstandingly great. My overall pace was 10.18, which is the fastest I've ever run such a distance. Weird.

And that was the last big week of marathon training! I ran 35 miles for the week and now it's time to start the 3 week taper. I just hope I can recapture the feeling of the end of that run around mile 20 of the marathon!
Posted by Liz at 21:40