I've been running my local parkrun 5K as often as I can this year, which has worked out at about 2-3 a month on average. When I've been to volunteer, I've sometimes taken Robbie and Emma with me, so they know the event and some of the regular runners. I've often wondered when they'd be up to running it with me, and I've seen one or two 7-year-olds complete it, even if they walked at the back.

The last race the kids ran was a 1K, and they both had to stop and walk quite a lot of it when they got tired, so I wasn't sure either of them were ready for a 5K yet.

However, last Saturday morning I asked Robbie if he fancied running with me. To my surprise and excitement, he said yes! So I quickly registered him on the website and printed off his barcode. This meant he would get a time and all his stats for the run.

Pete brought Emma along to spectate, and we were all there for the start at 9am. I was pretty sure that we would finish last, and thought we would probably walk a fair amount of the course.


As we set off I encouraged Robbie not to run too fast. He kept saying he felt really fit, but I got him to jog at a steady pace rather than dash off. We settled in fairly near the back of the pack. After a loop on the grass, we saw Pete and Emma again. I thought we might start walking soon, but we kept going. I was surprised when we passed 1K, and then 1 mile, and we still hadn't stopped to walk. I asked Robbie if he wanted to walk and he slowed for about 10 steps but said he was fine to keep running. 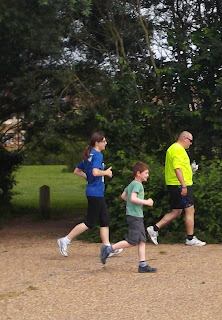 So we carried on. The course goes on a path around a lake, and we overtook a few people who had started walking themselves. There was one couple of women who would sprint past us, then stop and walk so we'd pass them, then they'd sprint past again. I hoped we could stay ahead of them...

Robbie seemed to be enjoying himself, and he didn't stop chattering the whole way round! I'm sure he could have sped up if he wasn't so talkative. I just couldn't believe how well he was doing, he just kept going. We passed the 3K marker, then the 4K and I realised he wasn't going to walk at all.

As we got nearer the end, we saw Pete and Emma again, and some of the earlier finishers, who gave Robbie a lot of encouragement. He was by far the youngest runner there, and so he got a lot of friendly support. As we approached the finish line, the couple we kept overtaking passed us for the last time and finished just ahead. I told Robbie to run as fast as he could to the finish, and he suddenly shot off ahead of me, taking me by surprise!
He finished in 98th position (1 ahead of me) out of 103 runners - not last! His time was an impressive 36m35s, which I was amazed by. I think my first 5K - which I'd trained for - was about 33mins. Robbie had never run further than a mile before, and he walked most of that.
I was so glad I'd asked him to join me. It was such good fun running round with him, and I felt incredibly proud afterwards. As a junior runner, he'll win a free t-shirt when he completes 10 parkruns, so I'm hoping that incentive will help motivate him to do more! By far my slowest parkrun time, but definitely my favourite one yet!