I signed up for this race a while ago, and had decided to go for a PB. Over the last few weeks I've been adding a bit of speed work to my running - intervals, tempo runs and the odd hill - although it's been somewhat ad hoc and I haven't followed a proper training plan. It's been working though, and I've increased the average pace of my training runs a fair bit. I realised that I had been running too easy a lot of the time, and no wonder that my 5K and 10K PBs were so long ago.

To be specific, I ran my 10K PB in summer 2012, when I did 2 races in about the same time - 51 mins 17 secs. The second of those was the Bexhill 10K, which was the same as this race, although the route has changed since then.

So my aim has been to get under 50 mins. I think this is achievable, and I've been training to run 8 min per mile pace to do this. Recently though, I have been really tired (due to work and various busy-ness), and I haven't been able to maintain 8min/mile pace for anything longer than 3-4 miles in training runs.

My preparation for the race was terrible! This race always falls around Robbie's birthday, and he turned 9 years old the day before the race. According to his wishes, we spent that day walking around a theme park and queueing for rides - LOTS of time on our feet. For dinner, we had a huge pizza and birthday cake - less than ideal race fuel!

So I just had to go for it. I decided at the start that I would go out at 8 min/mile pace and try to hold on. I wasn't really interested in running a 53min 10K, so I would either hit my target, or crash and burn, but I wasn't going to settle for anything easy.

The race started at 10:30am, and it was ridiculously hot for September. We set off along the seafront, and within a few minutes I was shocked at how hot it was. I started sweating, and within a couple of miles I decided that I would look out for a water station and pour the water over my head (I don't normally bother with drinks stations in a 10K).

We continued in the roasting heat on a course that was totally unshaded, until we got a to a turnaround point. As we came back in the opposite direction, there was a fairly string headwind. At first it was wonderful, and it really cooled me down. But it also slowed me down, and became quite difficult to run into. My pace started to drop. After a confident first 2 miles, the next 2 miles were a struggle.

As we went past the start/finish again, it was the half way point. I heard an announcement that drinks were on the left, but as I heard it, I saw people giving out cups of water to my right! It was too late and I had missed the (tiny) drink station. I felt gutted, but tried to push it out of my mind and keep on running.

Then came the hill. Most of this race is really flat and fast as it's along the seafront, but there is a steep hill just before mile 5 which you run up, down the other side, turn around and run up and down again. I'd forgotten how bad it was. As I reached the hill I was almost ready to give up. I felt exhausted, and as it went up and up I was almost walking. A male runner offered me some water, but I didn't want to take his bottle and chuck it over my head, so I declined. He advised me to take deep breaths - I think I sounded pretty bad at this point!

Mile 5-6 was 8m59s - horrendous! That was the worst bit. As we came back down the hill, I could see the finish in the distance and I focused on it determinedly. There were so many negative thoughts in my head; 'I didn't get a drink', 'I didn't see the kids and Pete', 'there are no km or mile markers', 'the weather is too hot for this', 'the hill has ruined everything' etc.... but I pushed them out.

I gave it what I could to get to the finish, and crossed the line feeling that I had given my best. I knew I hadn't beaten my PB, and later found out that my official result was 51m37s.

Anyway, apart from me, there were also a couple of kids races which Robbie and Emma did. Emma ran in the 1K and Robbie ran in the 2K - (there were only 2 of them in that race, but at least he came 2nd)! I don't know their times as they're not on the website yet, but I was proud of them both for taking part. 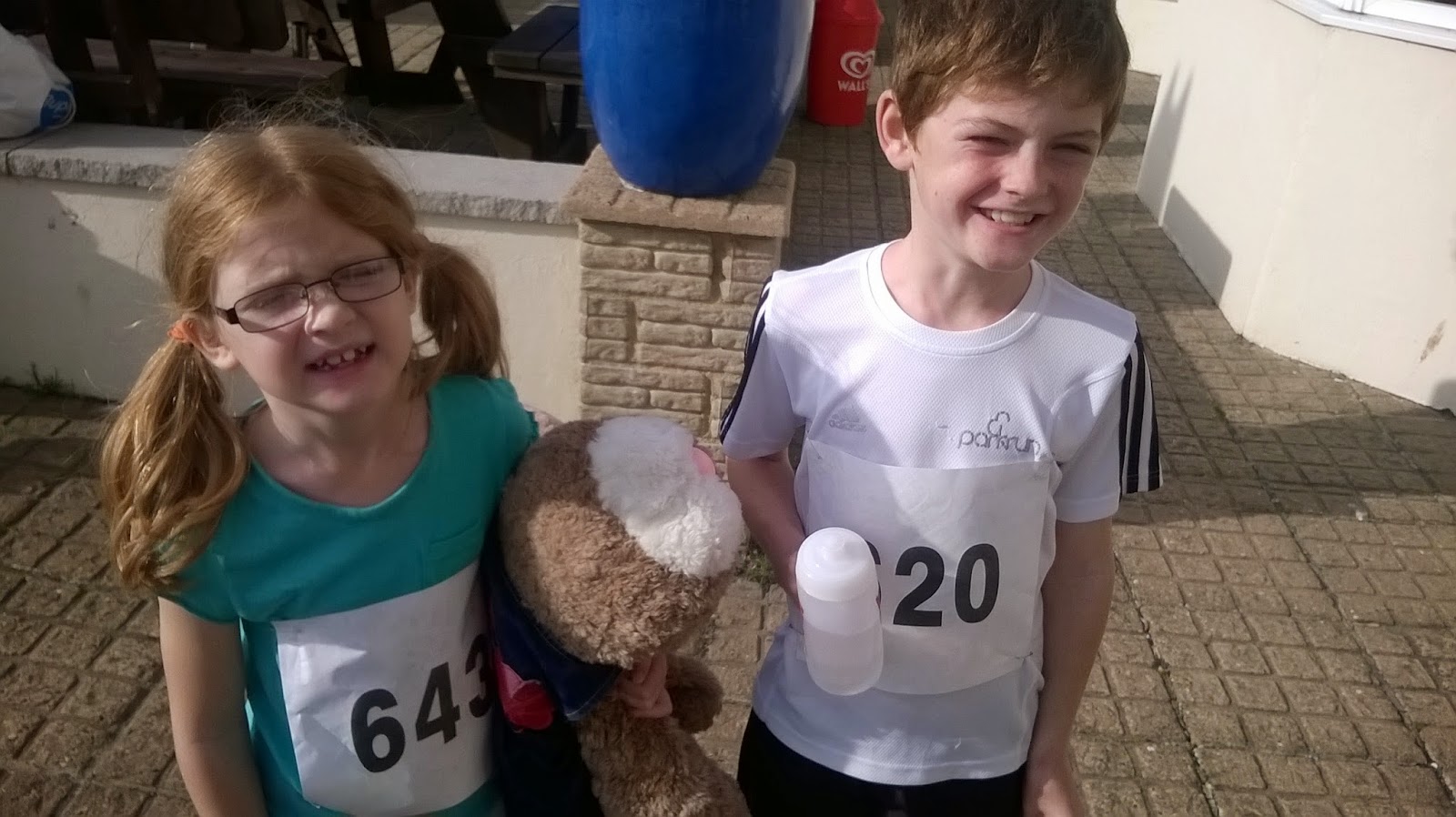 Now, inevitably, I'm scouring the Internet for another 10K - I'm feeling a bit disappointed but I know I can run faster on a flatter course and a cooler day. I'll keep trying for that pesky sub-50mins!
Posted by Liz at 14:09