On Wednesday I had an appointment with Ms Physio. It was really positive as there seemed to be no recurrence of foot pain, and she said I should keep doing what I'm doing, building the miles slowly and icing the foot after running. As I left we both said we hoped not to see each other for a while!

So on Friday morning I got up at 6.30am again, and went for my second 3-mile run since starting again. It was fine, although I felt as though as I was running fairly fast, assuming I was well under 9 min/miles, but when I looked, I averaged 9.09m/m. I iced the foot like a good girl, and went about my day...

Then on Saturday Pete dragged me off to a running shop (Me: 'Oh go on then'). He got some high visibility stuff, and I decided I could do with another pair of running tights. As we were browsing away, I started to notice that my heel was hurting again. As the day went on, it kept hurting, it hurt when I went to bed, and it still hurt when I got up this morning.

I had planned to run 4 miles or so, but I switched to the bike instead. I don't know what's gone wrong - I've been doing everything so carefully, and it was over 30 hours after Friday's run that it started to hurt. I've kept wearing shoes during the day, not going barefoot, as instructed. I wear trainers most of the time to support the foot as much as possible. The only other thing I can do is stop running again...pah.

Anyway, I had a good cycle in the sun, I did 12 miles and it was a glorious day. I'll play it by ear, and if the foot feels better tomorrow, I might try a run on Tuesday.

In other news, I've been celebrating Halloween for the first time! When I was a kid it was never a big deal, but the kids had 2 parties to go to this week! They've had a great time dressing up, and they made pumpkins with Pete, and I even made pumpkin soup for dinner with the innards! 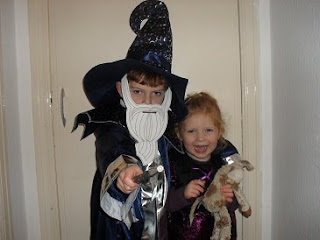 I need my little witch and wizard to sort out a magic spell to make my foot better and get me running properly again. Heel Reparo! Plantar Fasciitis Evictus! Stupid Pain Awayo!
Posted by Liz at 20:45