Having been snowed in last week and with all of us in our little flat instead of at school or work, we were really pleased on Sunday to be able to dig out the car and drive it to the supermarket! The roads weren't too bad, there was some definite melting and thawing going on, and there seemed to be sunlight at the end of the snow-tunnel.

Then we got up this morning. Unforecast and unwanted, there was a new, thick layer of snow. We battled through to school, but they had to close around lunchtime. We had heavy snowfall all morning, until about 2pm. By then, the paths and roads were covered again, the trains and buses were all cancelled, and I was thoroughly grumpy.

It is supposed to warm up a bit at the end of the week, but I guess we'll just have to wait and see...

Although Robbie was pretty bored with staying at home all last week, he did have fun joining in with me and Jillian. Emma often starts the first few exercises, but she gets bored very quickly. Robbie has been great though - he stayed for the whole routine (level 2 of the 30-day shred) for 6 days in a row! I was impressed. (Disclaimer - of course he didn't actually do any of it seriously - I'm not a maniac). 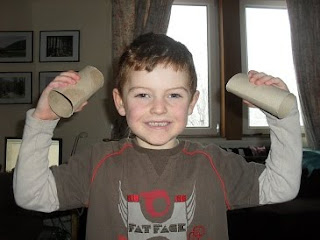 Every day he asked 'Is it the same one again?', and then he had a constant running commentary that was always the same : 'What is Julian doing now?' 'She talks too much' 'Julian's not doing all the exercises properly, is she..' 'What are those people in the back called?' 'I need to hold on to a piece of furniture for this one' etc etc. It was fun doing it together, if a little off-putting. 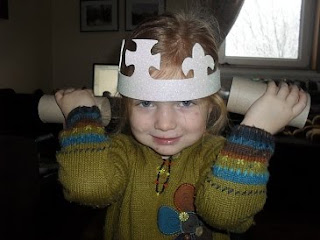 This morning, while he was briefly at school, I did Level 3 for the first time. Blimey. That was HARD WORK. It was manageable, but only with me doing the suggested 'beginner modifications' in some parts. Having used some new muscles digging the snow off of our path on Saturday, I was already aching before I started, and I'm sure I'll wake up to a whole new set of aches tomorrow. 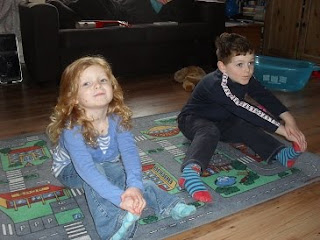 Stretching out in the cooldown

I've got my postponed Physio appointment on Wednesday, but if Emma's playgroup is still closed (and it is tomorrow), I'll have to postpone it again. So no progress on the foot for the moment. I must admit, I'm not particularly tempted to run in knee-deep snow and freezing temperatures, so perhaps it's good timing! 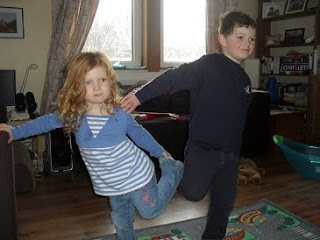 Needing to 'hold on to a piece of furniture'
Posted by Liz at 19:06