On Sunday evening I was half-watching a crappy film on tv, when I decided to browse the internet for what local races were coming up. I thought I could see whether there might be a 5k or 10k in about November or something that I might try... anyway, I ended up registering for a 10k next Sunday! I didn't really mean to, but it's only about 12 miles away, and it's along the seafront, so hopefully fairly flat. I've only done two races so far in 2011, so I just couldn't help myself.

As I went for a preparatory 5 mile run on Monday, I started thinking about my history of 10ks. I've done 3 before now, and none of them has gone particularly well.

The first 10k I did was my second ever race. I had done a 5k in June 2008, and couldn't really believe that I could keep running for over 6 miles in one go. But I signed up for the Great Edinburgh Run in May 2009. It's quite a big race, and was televised. I started off too fast, and probably overdid it on some of the downhills (it's very hilly). Just before 6k, I got a stitch, and had to stop and walk for a while. But I made it to the finish line in 62 minutes, which I was happy with. 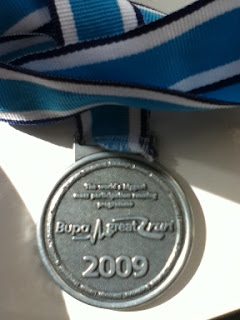 Then 6 months later I did my next 10k. By then I had joined a running group, and was running a lot more regularly and with a focus. The 'Run with the wind' event had competitors meet at a school, then we were all ferried up a hill in some coaches, and the race was run down the hill back to the school. Although the course had some uphills too, it was down overall, and the first 2 kilometres were basically a case of falling down a small mountain. It was pouring with rain, so I wanted to get it over with quickly, and I ran with a friend who was faster than me. By 5k, I had to stop and walk - I had a stitch again, and I was exhausted. I started running at a more appropriate pace soon, and still managed to bag a huge PB of just under 55mins - still my best time at this distance. 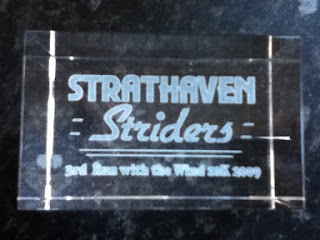 The following year I concentrated on the marathon, and then eventually got injured and out of action. My 'comeback' race after all the heel pain was the trail race I did last June. It was supposed to be a 10k, but turned out to be a 9.3k. It went ok, but I was a bit disappointed that it was short, and I found the trail a lot tougher than road. Again I had to walk up a particularly steep hill. Having said all that, I really enjoyed it. 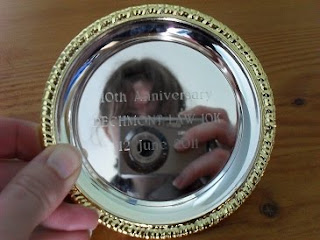 My main problem with 10ks seems to be that I start off too fast and get a stitch halfway through. I'm not expecting a PB on Sunday, as I've barely run over 3 miles since that trail race, but my 5k pace has been fairly good recently. I'm hoping to enjoy a new race in a new town, and not have to walk in the middle of it, and aim to be somewhere around 56 mins. I can't wait to find out what kind of souvenir there'll be...
Posted by Liz at 20:32