Well today was my second race of the year and my 4th 10k ever. In my previous post I related how I have struggled with this distance in the past, but I felt that I ran ok today (in spite of my time...).

It was a very hot sunny morning and the race - The Big 10K - takes place in Bexhill-on-sea and is all along the seafront. It was a lovely route with fantastic views across the Channel taking in beaches, cliffs and little boats out to sea. However, while the race is advertised as a fast, flat course, there was a last minute change due to unexpected road works. This meant that we had to do 2 times a 5k loop, and this loop contained a nasty little hill.

It was a small hill, but steep, and you had to run up, then down, then turn round and back up and down. As the loop was then repeated, this meant 4 steep hills instead of the planned 2. Anyway, it wasn't too bad (and let's face it, after Scotland I am used to hills). The bigger problem was the sunshine.

It was a glorious day, but there was not one spot of shade, and very little wind, and it was just roasting! There were a few drink stations but I didn't dare to take any water as I didn't want to get a stitch, even though I soon felt quite dehydrated.

Anyway, my first mile was ridiculous (8m47s), but it was slightly downhill, and I just can't help but get caught up at the start of a race. The next 4 miles were all well over 9 mins, with an exceptional 5th mile of 9m41s - I was suffering by then! My last mile though was 8m58s - I had held something back at least.

As I got to the finish line, I felt so hot, exhausted and a bit sick, and for the first time ever, I slowed down almost to a walk as I crossed the finish line. I usually try and sprint towards the end (although I often feel as though I'm sprinting only to watch a video later of a tired me plodding slowly). Today, it was just too hot.

I hit the button on my Garmin at 57m16s, giving me an average pace of 9m10s. I know I said I was aiming for 56 mins (and if I'm honest, I'm always secretly hoping for a PB), but I think a flatter course on a cloudy day would have got me that. 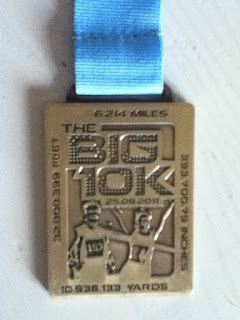 Looking back at my Garmin data, I see I hadn't run over 6 miles since 3rd June, and before that not since September last year when I got injured! So taking that into account, I'm fine with the time. I've got something to improve on now.

Plus it was great fun to do a race again. Even better though was the kids' race at the start. Robbie and Emma did the 500 metre race and it was brilliant! Their first race and they really enjoyed it. I was amazed as the race started and within about 10 seconds, Robbie had run off - he's not at all competitive, and more likely to wait for Emma than think to run fast, but today he really surprised me. It was great to see him go for it - Pete said most of the kids in front of him were aged about 8 or older, and he's only 6, so I think he did ok.

As for Emma, I ran along side her, and she just kept going. We were almost at the back as she was one of the youngest, but she ran the whole thing and never gave up or complained. As we came towards the finish, she started waving to the crowd - it was hilarious, and as there was no-one else around us, they were all clapping and cheering her on! 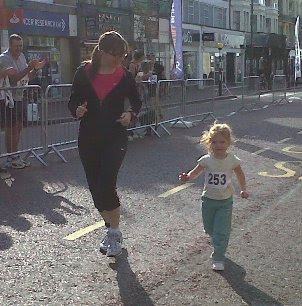 I wish there were more childrens' events like this with adult races - it was such a nice atmosphere and a great thing for them to take part in. 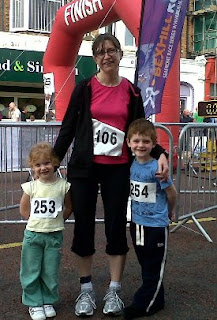