So I've finally been getting some running done! When I looked back at my running diary and the calendar on the Garmin, I couldn't believe how long it had been since I'd been running regularly. Basically, ages. I ran 4 times in the first week of July, and then had a bad cough and cold. I didn't run again until 31st July, when I barely managed to complete 1 mile! After that my running was very sporadic, and whenever I did get out I struggled with both distance and speed.

But since we moved, I've been running a bit more, and my speed has definitely been improving.

Last week we got stuck into a new routine as Robbie started school and Emma nursery. I managed to run 4 times, about 3 miles each time, but also including a great 4 mile run on Friday. It was really hot and humid, but I felt good, and averaged 8.53min/miles, which is definitely an improvement on previous weeks. As you can see, I was very red and sweaty after that run. 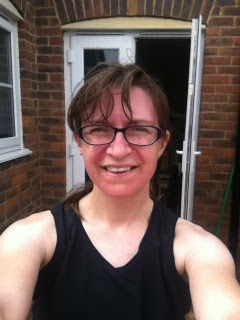 This week I am hoping to try a local running club, which is as much to meet people as anything. I've also just bought a bike! Since mine was stolen before we moved, I've really been missing it, especially as there are a lot of cycle routes around here that I can't wait to try. I haven't picked it up yet though, so I'm looking forward to that. Hopefully summer will hold on for a few more weeks, despite high winds today. I'll need some fine weather to get out on the bike!
Posted by Liz at 11:14