A week off running (more or less)

In my last post I stated that I was going to take a week off from running. Well last week I didn't do much, but I did have one teeny tiny run.

It's hard mentally to take time off from training, and I did feel guilty a lot, and worried all week that I might put on weight. However, with that concern in mind, I was quite careful with what I ate, and was actually a couple of pounds lighter than usual when I weighed myself midweek.

On Tuesday I did something that I haven't done ever in my life - I went for a swim by myself! I have gradually been overcoming my fear of going underwater (with help from Pete and the kids), and I'm learning to  swim lengths of breaststroke - very slowly and with a break inbetween each one! So on Tuesday I avoided the time when people were swimming lanes, and went instead to the open swim, as I wasn't sure I'd be fast enough in a lane. It was perfect, as there were a few old folks swimming sedately up and down (i.e. my speed), and a couple of parents with children who didn't really get in the way.

I was there for about half an hour before I had to leave for school pick up, and I swam 14 lengths in that time - which is 350 metres! So you can see I'm not preparing for a triathlon just yet, but who knows how fast I'll be in a year's time...

I had a lovely 11 mile cycle on Wednesday, which was mostly on cycle path and had the sun blazing through the red and orange trees. The scenery was lovely. 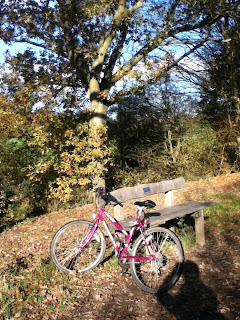 Then I tried a little run on Thursday. I went at 7am, before school, and just aimed to stretch out my legs and see how they felt. I averaged 8.48 min/miles, which is probably a bit slower than I would usually run a short distance before breakfast, and I kept it to a modest 3 miles. I felt ok fitness-wise, but I've had a pain in my left shin for a couple of weeks, and it was still bugging me.

So I decided not to run again, and as we were away at my parents-in-law all weekend, I didn't do any more exercise. Instead we drove to their house on Friday evening and met up with Pete's 3 siblings and their families. Then on Saturday we went swimming with all the children in the morning, had a quick lunch of sandwiches, then went to the cinema. Pete's Mum took the kids to see Madagascar 3, and the rest of us saw Skyfall - the James Bond film.

I'm not a huge fan of all the old Bond movies, but I really enjoyed this. It was just great to see a proper grown-up film at the cinema for a change, and the story was good, the actors were fantastic, there were some funny lines, the baddie was hilarious (Javier Bardem) and I just really enjoyed it.

That evening we went out for a curry, then to a local bar where I drank a few Jack Daniels and Coke - a very unusual weekend for me, but all this relaxing and no working out made a nice change!
Posted by Liz at 19:01