Last week I didn't do a single run! That was the first time I'd gone a whole week without running since August 2011, when we moved house. (Thank goodness I keep accurate records so I could check this statistic).

It's not that I didn't feel like running, I did, but I've got this nagging pain in my left leg which has been there for a few weeks. I think it might be a nerve problem, as I had something similar at the end of 2009. However, as that was so long ago, I can't remember exactly how it felt, so I'm not sure. I could do with seeing a Physio, but it's soooo expensive, and I'm trying to be careful with money these days.

I find it hard mentally to accept not running. 2012 has been a great year, and recently I've got used to adding up my mileage each week, and taking pride in regular long runs. It's difficult to go from that to a week of 0 miles!

But I listened to an interview with Australian marathoner Michael Shelley the other day, and he was talking about taking weeks off after the Olympic marathon. Then I listened to Ultra-runner Marshall Ulrich say he didn't run at all for months after one of his enormous distances. So I know I haven't exactly run a 2h14m marathon or run across America like those guys, but I've run further and faster than ever before this year, and been lucky to avoid injury for most of it.

It seems that the time is right for a bit of rest and cross-training. Next year I'm hoping to improve on my marathon time in the Brighton Marathon in April, so I need to be fit and well at the end of December to start training. With that in mind, I didn't do much last week!

The weather has also been horrific, so there hasn't been a huge temptation to go for a run. We've had A LOT of rain, and there's been some flooding, which is not great for your trainers.

In irrelevant news, I took Robbie to a gym place the other day, where he's been wanting to go forever. It's only open on weekdays, so when he had a day off last week (INSET or teachers' training day), he couldn't wait to try it out. It was right up his street as he could bounce, swing and hang upside down to his heart's content. We'll definitely be going back. 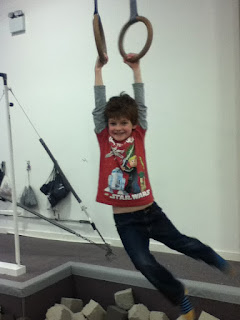 And here's me making a fool of myself and doing a bit more cross-training: 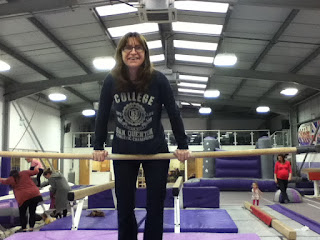