In my last post I mentioned that we have had loads of rain recently. Nothing has changed since then, although there has been the odd dry spell in between the wet.

Last week Pete was on holiday, which meant that although I was working, he did all the cooking and picking up kids from school, which made things much easier for me. I also had 2 days off (as usual), and on Tuesday, we took the opportunity to go to the cinema - yes - in the daytime! First time we've done something so decadent for at least 8 years... We saw Captain Phillips, which was pretty amazing.

On Friday, my other day off, I simply insisted that we do something more worthy, so we decided to have a bike ride together. I can't remember this ever happening before. We biked to the coast, did the crossword over a leisurely coffee, then biked home (in the rain). It was a really nice way to spend the morning.

On Saturday it was of course parkrun-day, but Pete wanted to run, so he did it with Robbie while Emma and I spectated. They set off on a course covered with puddles and us girls had a wander round the park. 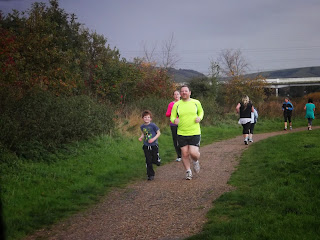 After seeing them at the half-way point, we were on our way back to the finish when there was a huge clap of thunder. It was so out of the blue it came as a surprise, and Emma was a bit scared... 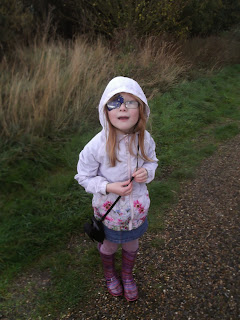 It started to rain, so we walked a bit quicker, and then suddenly the skies opened and there was a HUGE hailstorm. I've never been out in anything like that - the hailstones were fairly big and it just went on for ages. We got totally soaked to the skin - I mean I literally couldn't have been wetter if I'd jumped in the lake - and we ran to a bus shelter to wait for Pete and Robbie.

They eventually emerged looking like drowned rats. Apparently the barcode scanner didn't work because everything was so wet, so all the results were worked out manually - thanks volunteers! It was an incredible downpour.

On Sunday though, such a change! It was a lovely dry, sunny day - much more my kind of weather. We took advantage with a family bike ride. All 4 of us got on our bikes and went a coule of miles up the local trail. There were LOADS of people about - clearly everyone was sick of being indoors during the rain and had come out in the sun. 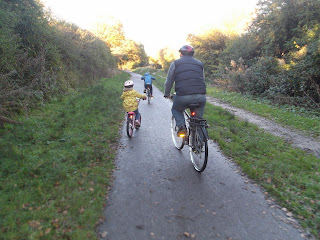 Emma managed to cycle really well, and although Robbie fell off his bike after skidding in mud at the end, we all had a good time. 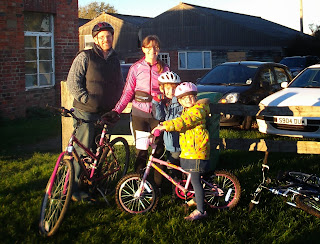 It's rained all day today, and the same is forecast for tomorrow (when I'm planning a longish run). Will the mud ever dry out? Bring on the cold and frost!
Posted by Liz at 18:48