Well we have been busy. Just 6 months after getting an offer accepted on a house, we have finally got the keys and the previous owner has moved out. To say it dragged on a bit would be an understatement, and we finally completed on Friday afternoon - the final day of our mortgage agreement - just a few minutes before close of business for the day.

Then it turned out that the previous owner had left the house in something of a state. It was full of old rubbish and absolutely filthy. Luckily we aren't moving in yet, and he has to cover the cost of removing the stuff he left behind.

So we have spent the week trying to get things sorted. We've had the rubbish removed, and today we are getting the whole place deep-cleaned.

Meanwhile, I haven't had time for as much running as I'd like... But my parents were here last weekend, and that meant that on Saturday, Pete, Robbie and I could all do parkrun! Mum and Dad looked after Emma while she played in the park; Pete ran with Robbie and I ran at my own speed for the first time since June! 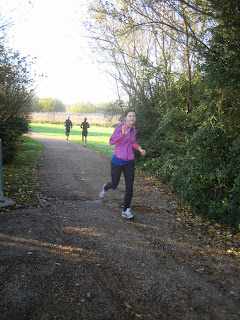 As I'm pretty unfit at the moment, after missing runs with my ankle injury, I was curious to see how fast I could run 5K. I hoped to run under 27 minutes, but I actually finished in 26m01s. I was pleased with that. 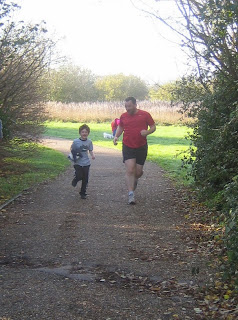 It was a lovely sunny morning and a nice run. Pete and Robbie finished a few places behind me, and Mum took some nice pictures.