After my very enjoyable 5 miles on Tuesday, preceded by 12 miles on Sunday, I had a physio appointment on Wednesday. I've been going to see her since the calf pain I had during training for the marathon, which she diagnosed as a sciatic nerve problem and completely got rid of. Anyway, on Weds, my legs were feeling very achey after the two runs, and woo-hoo we have a new problem! I've always had stiffness in my right knee, and never got round to getting that looked at, but she had a look and decided it was caused by my IT band. 'Massaging' is a nice soft sounding word that conjures up images of relaxation and soothing. That is not what happened to my legs - there was instead prodding, poking, kneading and sobbing (that last one from me, not Ms Physio).

Then she applied some of that funny tape stuff in bright pink to my thigh. It's supposed to help relieve pain and support the muscles. She told me that I probably shouldn't run that evening as my legs were quite stiff and sore. Off I went with a right leg like a camp zebra, knowing that I wanted to run with Jog Scotland as usual. 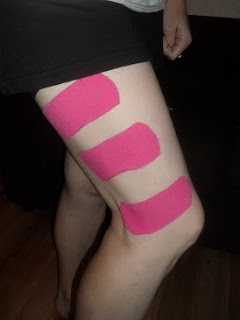 At least the kids think it's cool

Then I had a long bike ride. The kids were at the childminder, and it was my only chance to get on my bike and check out the cycle route to work, as I've been thinking of cycling there rather than driving when I start teaching again. It was only 12 miles in total (there and back), but after the pummelling my legs had had, I found it quite tough, especially the hills, one of which is horrendous. I'm really not sure about the cycling idea. Most of it would be on busy roads, and involve a lot of busy junctions and roundabouts, and obviously it would take longer and be much less convenient than driving.

Anyway, that evening, I wanted to go to Jog Scotland, as my pregnant friend was coming for the last time - at about 25 weeks pregnant she's done really well to keep coming! I jogged with her, and we did a shorter route of 5 miles at about 11.30 min/mile pace - nice and comfortable!

By Friday evening I was feeling rested, and managed a 5k in 26.50mins, whcih as my best time for a while on a hilly route.

Saturday was Pete's birthday! We saw Toy Story 3 in the cinema with the kids (at last!), then had a big Mexican lunch at Chiquitos including chocolate cheesecake - yum. Later there was also birthday cake which I made, so I know exactly how much butter and sugar went in it (loads). In the evening I surprised Pete with tickets for a couple of comedy shows at the Edinburgh festival, and we had a great time on a rare night out together. We collapsed into bed at about 1am, and that was the end of my plans for a long run this morning.

So after a tired day of supermarket shopping (boring!) and swimming (fun!) and the last of the birthday cake (calorific!), I finally went out at 6pm. I decided there was no point attempting my planned 10-12 miles when I was feeling unrested, so I went for 7 instead. It went pretty well, to my surprise! 7 miles in 62 mins, and there was one really long hill which slowed me down there. Again, my last mile was the fastest (8m25s) which is always pleasing.

So 20 miles run this week - less than last week, but I also had 12 miles of bike ride, so more exercise overall.

In other news, Robbie started school on Thursday! It was only for 90 mins for the first 2 days, and he's been to the nursery class there for 18 months so he was quite unfazed by it all, but he looked so grown up in his uniform! So begins a new stage of family life - we are now the parents of a schoolboy! 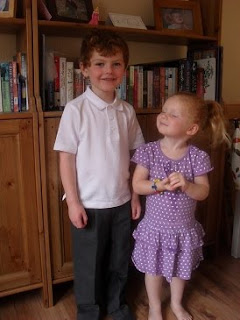 All grown up with proud little sister.
Posted by Liz at 19:28