Tomorrow we'll be piling into the car with bags of stuff and driving a few hundred miles to Shropshire. We're staying in a big house with most of Pete's family for a week. We went to the same town last year, and there are some really nice walks and a lot of natural beauty around there. I did a bit of running last year, and I'm hoping to do a bit more this time.

I usually run with my Jog Scotland group on Wednesday, but today I joined them for an 8am Sunday run. Most Sundays I just don't make it out of bed in time - not because of my crazy fun-packed Saturday night partying, but because I'm getting old and tired and I need more sleep. We ran over the Forth Road Bridge, which I haven't done for a while. It used to be one of my favourite routes because, although it's quite a steep up-and-down, my mind always thought it was flat, and was able to convince my legs of that. Weird, I know.

These days I know exactly how hilly it is. It was a nice sociable run though, as I chatted to a couple of different people. I did the first 3 miles quite fast, as I was keeping up with some faster women. Then most of the group continued for a longer run, while I and another runner turned back. I slowed down a bit to her pace, but it wasn't much slower than I would've gone on my own. We did another 3 miles, and then she got to her car, so I added on another 3 miles home. I sped up a little bit again for the last part.

Overall it was 9.4 miles at an average of 9.14 m/m pace. Not at all bad, and on track for a close-to-2-hour half marathon, which is my next race goal. Then we went off to the pool with the kids for a swim, and I realised how knackered my legs felt.

I'll be aiming to stick as closely as I can to my usual schedule of running next week. That's what I said before we went camping though, and it was a major fail, so let's hope I can do better this time... 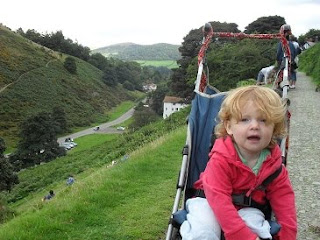 In Shropshire last year
Posted by Liz at 14:58