As I've been back running for 8 weeks now, and completed 4 or 5 runs of around 3 miles or longer, I thought it was time to try a little 5k race. Robbie usually has swimming lessons on Saturday mornings, but today was a holiday, so the perfect opportunity to go along to a free event.

It was Edinburgh Parkrun, held every Saturday morning, free to attend, and a race which I had only done once before, its first ever event in October 2009. Parkrun is a fantastic scheme, which I'll come back to in my next post - stay tuned. 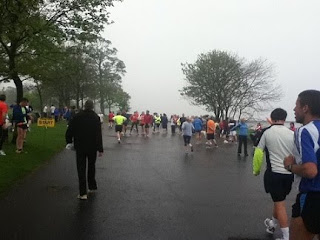 Warming up before the start

Anyway, I didn't really have a clear goal this morning, other than to complete 5k in a better time than recent training runs (around 27m30s), and see how close I could get to my PB. The route is very flat, unlike all my training runs, and I set off much too fast, being pulled along by better runners.

After a while I realised I was unlikely to sustain a 7m30 pace (haha), and controlled myself. I seemed to get in a group of women, and we ran together for a while, and this got me through the first mile in 8m13s. This was a bit fast, but I wasn't sure how well I could do on a flat course. So I kept going, some of the women dropped off, and I ended the second mile on the tail of one speedy looking woman. She got me through mile 2 in 8m14s. So far, so consistent, but a few moments later I really began to tire. The faster woman powered ahead of me, and I slowed down. I was starting to get a stitch, and those last 1.5km of a 5k are always so much longer than they should be. My 3rd mile was 8m49s. 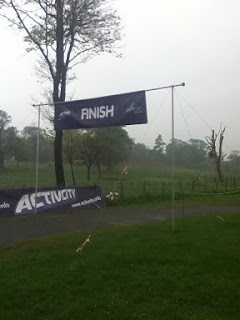 I don't know what to make of it really. I'm quite pleased with the time, as it's faster than I've been managing lately, but it is still about 90 seconds slower than the previous time I did this race (and my 5k PB). Looking back at my Garmin data, I am quite a way off the speed I had last August, just before I got injured, which I think was my real peak as a runner so far. It shows that I've got a long way to go to regain that fitness.

Anyway, it was great to take part in a race again, I really enjoyed it. I was surprised how busy it was, and how excited I felt to be running in a big pack of runners, all going off together to do the best that they could. I can't wait to do another one soon so I can try and improve on that time!
Posted by Liz at 17:58