After my great weekend away, I have spent most of this week trying to recover. On Monday - our last morning at Center Parcs - I had fitted in a little run, but I was so tired, it was pretty rubbish.

I got a few good nights' sleep, but by Thursday I was still feeling the effects of tiredness. On Wednesday morning, Robbie was at school and Emma was at playgroup, and I had a date with my bike. But I felt so exhausted. After a lot of contemplation, I decided to wimp out. I had a sore throat and felt the threat of a cold coming, and really I just couldn't be bothered. I felt a tiny bit guilty, but got over it, and spent the time catching up on cleaning, washing and tidying. Not exactly a treat, but it was nice to get things sorted out.

On Thursday morning, I managed to drag myself out to run 5k in the morning, but it was a little slower than my last run on the same route. On Friday night, my husband was a bad influence, and persuaded me to drink a few Baileys and stay up late. It really was all his fault, and I had absolutely no say in the matter. Consequently, I failed to get up and go for a cycle in the morning. However, it was not another missed workout, as I went at 5.30pm instead. It was a lovely day, so it was still sunny and a pleasant temperature then. 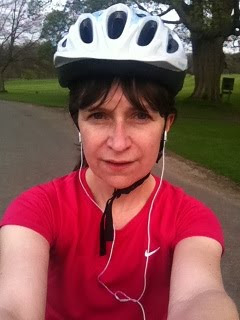 This morning I went out in sunny skies again for a run, but I felt really tired and sluggish again. I was awake in the night with a really annoying, persistent cough which stopped me sleeping, and I don't think I had had enough time to recover from the late bike ride yesterday. I felt really slow (although the garmin said different), and I stopped at 3 miles.

So, in total, I did only one cycle of 8.4 miles, one pilates class, but ran 8.8 miles in total - my furthest weekly distance since starting again - woo-hoo! This was the first week that I have run 3 times rather than 2. So far, so good - I am too suspicious to sound too positive, but the heel is holding up a lot better than I had expected.