Out with the insoles

Long-time followers with good memories may remember that after my fun times with Plantar Faciitis started last September (that's September 2010), my Physio prescribed a fetching pair of orthotics. They were quite uncomfortable at first, but I gradually got used to them and have been running with them in my trainers ever since.

However, a few runs ago I decided to try a run without them. So far, there hasn't been any sudden resurgence of strong heel pain, and I have now run maybe 3 or 4 times without the insoles.

There were a few reasons why I decided to try running without them. The main one was that in the last few weeks, I've been getting a few unusual pains in the foot, particularly after a longer run. I started noticing some discomfort around the ball of my foot, and I just had a feeling that this was being caused by the distorting shape of the orthotics. I haven't had any more of those pains since I removed them.

Secondly, I know when I started using them that a lot of people weren't sure it was the best way to go. From comments on my blog, reading other people's blogs and a few conversations with runners, I was prompted to spend a lot of time thinking about the whole debate over increased padding and protection (insoles and supportive trainers) v. minimalist running (barefeet). I'm still not sure what I think about all this, but I do think there's only so much support your feet can take before you lose the ability to run in a natural way.

Thirdly, it's coming up to a year since I first started using them, and the Physio said that they should be replaced after a year. So I might as well try running without them.

Finally, I've never really been convinced that they did any good anyway. The process of getting back into running was a long gradual one with many false starts. I still feel pain in my heel (allbeit on a much smaller scale than this time last year), and there was no one solution to the problem - certainly not the addition of orthotics.

I haven't thrown them away, they are under the bed so if needs be I can always put them back in again. But my plan for now is to take things sensibly and carefully - I know, really boring - but I'm going to stick to 3 runs a week for now, no running on consecutive days, and a gradual steady increase in mileage each week.

Luckily I've found some fantastic paths and trails to run and cycle on near my new home, so upping the mileage should be enjoyable... 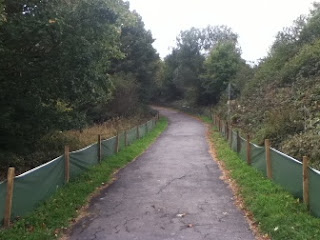 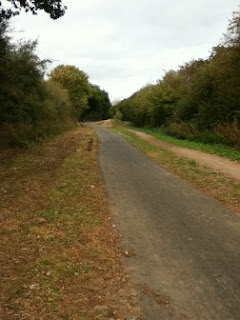