So October was the month in which I got rid of my insoles, ran my longest runs since September 2010, and increased my weekly mileage at last.

Last week was half-term school holiday, and I took the kids to my parents' for a few days. Being away meant I couldn't use my bike, but I did run there twice - a couple of nice 3-milers. We came back on Thursday, and I ran again with the local group. It was a hill session, which involved running hard up a short but steep hill 10 times, with recovery between each one. On the last hill I ran as hard a I could. It was really tough, but I felt great afterwards.

But on Friday I started to get a pain in my backside, and after walking around town with the kids and then around the supermarket, I was experiencing a lot of bum discomfort! It was my sciatic nerve, which often gets irritated, but this was worse than usual. I tried rolling around on a tennis ball and using my foam roller, and they really helped, but it was still sore on Saturday, so I went for a bike ride instead of a run. I found another route through some beautiful countryside and the autumn leaves were looking great. 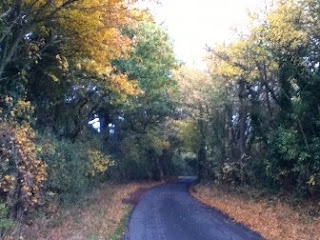 Today I finally found time for my long run, and pounded out a tough 7.4 miles. It was windy, the route was very undulating and I hadn't had enough sleep, and I found the last couple of miles hard-going. My bum felt ok though, and afterwards I felt fantastic! I was so pleased to have run another longer-than-last-week run.

Afterwards Pete and I also went for a walk with the kids. We wandered along the South Downs, stopped for a picnic, and tried to admire the view in spite of cloudy, overcast weather. It was really great though. 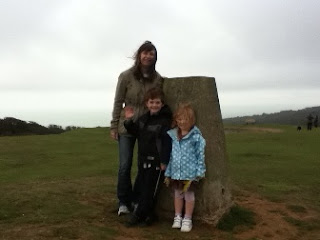 Windy at the top of the hill!

Pretty good for 2011. I'll probably go out on my bike tomorrow, which is still technically October, but it feels like the end of the month today. Next weekend I'm going away, so I'm not sure where I'll fit in a long run - I might not. I may just make it a 'cutback' week, and aim for a long run over 8 miles the following week. I'm not training for anything, so it doesn't matter too much - there's no rush!
Posted by Liz at 21:42