It was my birthday on Wednesday! My parents were here for most of the week, and after taking Robbie to school, I went for a little run while Mum and Dad looked after Emma. It was a great way to start the day, especially as I knew I was going to be doing a lot of eating later on.

We went out for lunch and I had a really tasty burger and chips. I was trying not to eat too much as I was going out for dinner too, but I did have pudding (naturally), and ended up feeling really stuffed. After picking Robbie up from school, I got glammed up (more than usual anyway), and caught the train into Brighton to meet Pete. 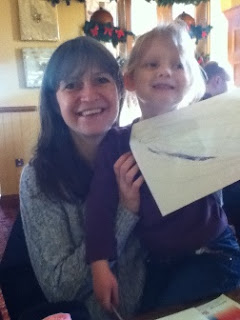 With Emma in the restaurant

The weather was horrendous, and as it was pouring with rain and hail, we decided to head for the cinema. First though, we stopped off in a pub for a couple of huge vodka and tonics - a drink we both used to enjoy about 15 years ago when we first met but hardly ever drink nowadays! It was lovely.

We saw 'My week with Marilyn' which was really good. Kenneth Branagh was hilarious and Michelle Williams was amazing as Marilyn Monroe. Before we had children we used to go to the cinema 2 or 3 times a month, and now we go about once or twice a year. Whenever we get the opportunity of a babysitter, it's usually our first choice for what to do.

After the film we went to a little Spanish restaurant. It was a tiny place with just a few wooden tables and one (really good) waitress. We ate tapas and the food was just like what we used to eat when we lived in Spain, it was lovely and very nostalgic.

So as I reach the very end of my thirties, I wonder what should be on my 'list-of-things-to-do-before-I-turn-40'. I'd definitely like to get a few more PBs! I wonder when I'll get to the age of slowing down, rather than speeding up? As I only started running a few years ago, I still think I can get faster, but I sometimes feel as though I'm past it already! I know that Paula Radcliffe will be aiming to win the Olympic marathon next year, and she's only 1 year younger than me. In fact, Constantina Dita won the Olympic marathon in 2008 at the age of 38, so I can't really use age as an excuse... 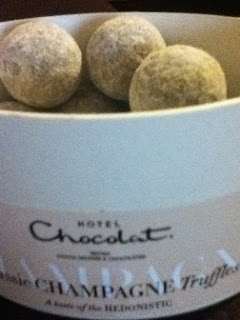