Last week was fairly busy. I had to fit running around my parents' visit, my birthday and a night out, Robbie's school holiday (term ended on Thursday), Pete's work night out, Pete's 2-day trip to Scotland, and an overnight stay from a friend. All things considered, I'm happy with my running!

On Monday I ran an uneventful 4 miles before my parents arrived and while Emma was at nursery. Then on Tuesday I went to my running club. It was the night of the 'Turkey Trot'. This event is an approximately 3 mile run in which everyone estimates their speed and is given a handicap. The first across the line wins a Christmas turkey, and prizes are awarded for fastest male and female. Needless to say, I did not go along for the prizes.

The race took place around the streets of the town, which meant some looking out for traffic, and some busy pavements. I set off with 2 other women who estimated their times as similar to mine. However, once we started, one of them (B), went off like a rocket! The other woman (A), with whom I often run and who I know is about the same speed as me, went with B, and soon the pair of them were running at under 7min/mile pace. Well I knew this was no good for me. I didn't want to completely blow up, so I let them go. I was running much harder than I would have liked, but I wasn't prepared to overdo it by so much.

They zoomed off, and after a while, other runners started catching me and overtaking. I think a lot of runners underestimated their ability, and I'll know to be more cautious next year! Anyway, I kept running fast, and after the first 1.5 miles, I started to catch them up. I could see that A was started to flag, as I had expected her to, and I overtook her at around 2miles. Then I could see B
just in front of me. I pushed hard, but suddenly we had reached the end of the race. I hadn't really known where it was, and it was only about 2.7m, according to my Garmin.

I wished I had realised where the finish was as I think I could have taken B as well! However, it was only for fun, and in the end my time was 5 seconds behind her, so not too bad. It was a really enjoyable event, and very sociable.

On Wednesday morning I went for a birthday run of 3miles, as I knew I would be busy for the next few days. That's the first time I've run on 3 consecutive days for a while! I didn't get a chance to leave the kids for a run until Sunday, when I had a very enjoyable 4m run round the housing estates nearby.

So in total I managed 4 runs and a total of 14.4 miles. Not bad. This week I might be too busy making and eating mince pies and biscuits, never mind the fact that the kids are both on holiday. My goal for now is to run just enough not to put on too much weight! 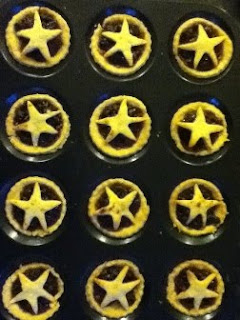 Homemade and delicious!
Posted by Liz at 16:57