If you are seeking advice about getting a PB at 5K, do as I say rather than as I did on Saturday. For example:

1. Don't choose a race date the morning after your husband has a big work party, coming home at 1.30am and waking you up.

2. Similarly, avoid a time when your husband has a cold and snores all night, keeping you awake so you end up downstairs on the sofa.

3. Don't choose a race route along the seafront on a windy day as there will be no shelter from that headwind for the first 2.5k.

4. Don't eat an enormous bowl of pasta and whole bag of choclate raisins the night before. It's not a marathon, you don't need to carb-load, and you will need to find a toilet in the morning just before the race.

5. Do press the on button on your Garmin efficiently at the start of the race. This will help you discern your speed, how far there is to go, and whether you are on course for a PB or not.

6. Do position yourself at the start so you can hear when the race has started, rather than coming to a gradual realisation when people in front of you start jogging.

Despite all these basic errors, I got my PB! So what do I know about race preparation...

Anyway, it was really cold when we arrived at the start of the race. I bravely removed my jacket as I knew I'd get hot with running, and I'm glad I did - the sun even came out towards the end. I stood fairly near the front, but I didn't hear the race start, and as people started moving off, I relaised that I should have got right at the front. I had to run around a lot of fun-runners straightaway. 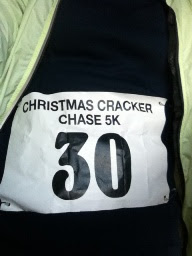 After less than a minute I looked at my Garmin and realised it was even later to the party - I had missed hitting the start button somehow. I switched it on, and tried to cope with the horror of not being able to measure my progress exactly. It turned out that I had only missed 0.1 miles though, so it wasn't too bad. When my first mile beeped, I looked down and I had run 8m12s. I knew I needed to be averaging under 8 min miles so I was a bit disheartened when I saw that.

There was a 10k at the same time, and all the runners ran 2.5k together, until we turned and headed back to the start to finish the race, while the 10k-ers continued further along the seafront. So for the first part of the race I was trying to keep up with and catch certain runners, and then I remembered that most of them would disappear at the turn anyway, and so it proved. We ran into a fairly strong headwind to the turn, but all the way back it felt a lot better!

For the rest of the race I was completely on my own. No-one caught me and the runners in front of me were about 1 minute away, so it was down to me to motivate myself. I did have the back of the pack coming towards me now though, and there was a 'last runner' marshal who told me I was about 8th. That made me feel great!

All the way back I couldn't see where the finish was, and I kept seeing landmarks and thinking 'nearly there', and it wasn't at all. I didn't know how much I'd missed on the Garmin, so I couldn't tell how far I had to go. The last part of that last mile was really tough. I just kept telling myself how gutted I'd be if I gave up, and how great I'd feel if I got under my PB.

Eventually I saw Pete and the kids at the side of the path, and the finish just behind them. they were all clapping away, and Robbie and Emma came to join me and run the last part with me. It was lovely, until I suddenly noticed I wasn't running as fast as I could! I'd slowed down a bit to run with them! As any good athlete would, I gasped an apology and kicked for the finish line.

I stopped my Garmin, which said 3 miles in 23m49s, so I thought I'd probably done enough but I didn't know for sure. I collected my memento coaster, a cracker, and a mince pie along with a drink. Then we went for a huge lovely cup of coffee. 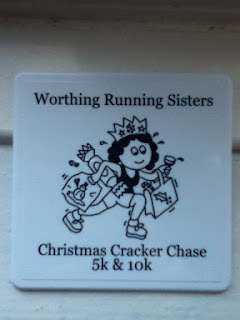 I spent the rest of the day checking the website for the official results. Finally they were posted in the evening, and I saw that I was officially 8th position out of 63 women with a PB of 24m31s!! My Garmin stats were as follows:
Mile 1: 8m12s
Mile 2: 7m49s
Mile 3: 7m47s
I am not used to those sub-8 min miles!

I was so excited for the rest of the weekend! I knew I could get close, but I wasn't sure how much faster I could go. Now I think I could go faster without the wind and with a better start etc, but I won't be going for it yet. It was a really good event and one I'd hope to do again.
Posted by Liz at 19:52