A Better End to the Week

So last week didn't begin well, as the car and I both failed to start on Monday (thanks for pointing out that irony, Char!). I felt quite grumpy all day, but forced myself to go for a run in the afternoon, and it cheered me up a bit.

On Tuesday it was a really sunny afternoon, and I decided to run with music, which I hardly ever do. Whenever I do though, it always makes me go a lot faster, basically having the same effect on me as if I were in a race. Tuesday was no exception, and I blasted out 4 miles at 8.13 m/m pace. I kept looking at my Garmin and trying to slow down, but it felt as though I was racing!

Perhaps that was a good thing, because later in the week I decided to do a 5K on Saturday. It was the weekly Parkrun event, and this was my third time on this particular course. The last time I did it, almost a month ago, I didn't really enjoy the race, and just felt really tired, so I tried to psyche myself up in the morning. I had a small bowl of cereal and no cup of tea (which can give me a stitch). A great sacrifice for me in the morning.

It was a cool, overcast morning, with a little wind, but not bad for running. The organiser announced that there would be someone pacing 25 mins this week, so I though if I could stay near him, I could get a time I would be happy with. As the race began, I set off in front of him. It was a small field again, with only 59 runners, so I was mainly on my own, and only passed 1 or 2 runners in the last mile or so.

Anyway, I felt ok for the first 2 miles, running splits of 7.50, then 7.56. I started to slow down on the last mile, and there is quite a bit of running on bumpy grass and mud, which I find a lot slower than road races. I knew the guy who was pacing, and I could hear his voice behind me for most of the race, as he was chatting away to someone! I was desperately trying to make sure he stayed behind me, but he sounded as though he was getting closer and closer...

As we approached the end of the race, he said to someone 'you've got 2 minutes to finish, go now!', (meaning to finish sub-25 mins). I started to sprint, and I heard the other runner charge up behind me. I kicked harder, and we crossed the line in the same time, with me just ahead.

My time was 24m45s, which is only 14 seconds slower than my 5K PB, but a PB on this course by 39 seconds. Considering that my 5K PB was on a flat road course, I'm really happy with that. I certainly felt I couldn't have given it any more effort, I was absolutely knackered at the end! I was 5/23 women, and 25/59 runners in total. It felt good to finish the week with a strong race after the disappointment of DNS-ing on Monday.

I ran 5 times altogether last week, which is very unusual for me, and I totalled 18.1 miles.

Away from running, we enjoyed the second week of the Easter holidays with no less than 3 visits to castles, and cinema, cafes and beach trips too. It's great exploring this area together, as we have been here 7 months now, and there are still so many places that are new to us. 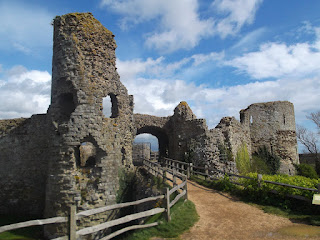 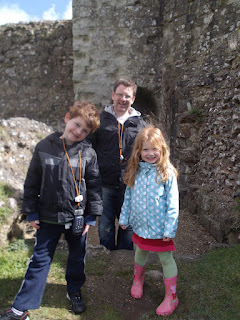 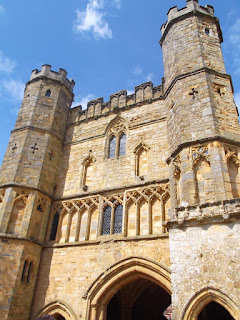 
This week it's back to school, and I'm actually quite sad not to have the kids home and to be able to take them out. But I also know that it'll be good to get back into a routine, and I'll find it easier to fit in the running, and hopefully some cycling as well.
Posted by Liz at 13:24