Yesterday was the 2012 London Marathon. With over 35,000 runners this year, it's one of the most popular races in the UK, and one of the biggest marathons in the world. It's not easy to get a place on the start line. Every year, after the race, there is a ballot for the following year's event. This now closes in a number of hours, and then hopeful runners have to wait until the following October to find out whether or not they have won a place. The chances of getting picked are slim - this year, over 170,000 people applied.

Otherwise you can choose to run for a charity, which usually entails a promise to raise a hefty amount of sponsorship money, or you can qualify with a Good For Age time (sub 3h50m for me - haha).

Since 2010, when I ran the Edinburgh marathon, I've been entering the ballot each year, in the almost certain knowledge that I won't get accepted. I don't even think I'd like it - I hate big cities and I hate big races. It would be a logistical nightmare getting to the start line, then meeting up with family, a nightmare for them to get round London, and the race is so crowded from start to finish, other runners would get on my nerves! But it's just become a tradition for me to apply each year to see if I can get my name picked out of a hat.

Anyway, yesterday I was spectating from the sofa. I went for an easy 4 mile run at about 8am, to bring last week's mileage to 19.3m. Then I settled down with a bowl of cereal and a cup of tea, Pete took the kids to rugby practice, and I had the remote control to myself for the morning.

It was a great watch. To be completely honest, I wasn't totally captivated by the winners of the men's or women's elite races, as I just didn't know any of the personalities enough. But there were several British men and women going for Olympic qualifying time, and of course among the masses were lots of celebrities, and a few people I know.

The online tracking system was excellent. You could type in a name, and follow that runner's progress from 5K onwards There were splits for every 5K, and a predicted finish time, so you could see exactly how they were getting on. I was tracking some of the British elites, a couple of celebs, and a few friends!

I kept an eye on the computer as one friend went through 10K at 3.15 pace (which was probably his target time), then he disappeared for ages, only to complete the next 5K in over an hour. He finished in over 5 hours, so something obviously went wrong there. However another friend ran an awesome race, with totally consistent pace, she finished in 3h59m55s! You cut it fine there Toni!

As for the Brits, a couple of women (Clare Halissey and Freya Murray) ran around 2h28m, which should get them into the Olympic squad, but unfortunately Lee Merrien, who needed 2h12m to qualify for the men's team was just outside with 2h13m41s.

Apart from that, there were also all the stories of people who were running for various causes and charities, which never fail to raise a tear.

So naturally all this got me thinking about the idea of running another marathon. I found the one I did really tough, and have had no particular desire to run another, until recently. A few weeks ago I read a blog post about a marathon which just made it sound so enjoyable and achievable. Then watching yesterday made me think it might not be so bad to do it all again.

The main reason for not doing it, is the risk of injury. It was 3 months after the marathon in 2010 that I got Plantar Fasciitis, which then lasted for about 10 months and stopped me running for a while. Obviously, the risk of not being able to run at all outweighs the positives of attempting another marathon. There is also the training - so many family weekends lost to training, and then being too tired to do anything after running 20 miles.

But on the other hand, so many other people are doing it, why can't I? And I have a time to beat - the Edinburgh marathon was so hot, I'm sure the weather added at least 15 minutes to my time, and I'm fitter and faster now too. 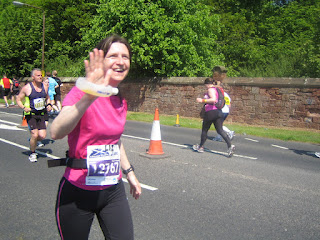 I'm not going to decide yet. I've been running consistently well for 4 months now, but I'm not convinced that upping my mileage wouldn't lead to heel problems. So I'll bide my time, and keep my fingers crossed that the PF doesn't come back. But watch this space, you never know!
Posted by Liz at 14:32