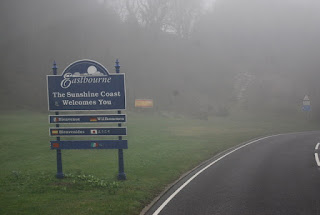 Since we moved to the South of England last August, I have been pleasantly surprised by the weather. We English are pretty damn interested in the weather (and I am definitely no exception), perhaps because it can be rather changeable and unpredictable. We also tend to think our climate is terrible, and we love to moan about it. But having lived in Scotland for 6 years, I have a more favourable view of English weather now. Suffice to say, there was a lot more wind and rain up north, (although admittedly we have moved to an area known as 'The Sunshine Coast', which prides itself on having more hours of sunshine than anywhere else in the UK, so it may not be entirely representative).

The last few months have been very dry and we've had a lot of sun, so much so in fact that the South of England and the Midlands has received drought warnings and we are being urged to save water.

But this has all changed over the last couple of weeks. The rain is BACK, and now it just won't go away. Every time I look at the local 5-day forecast, it has rain scheduled for every day. At first I thought we deserved a bit of rain, it's fair enough, and of course we need to fill those empty resevoirs. But now it's just getting boring, and there seems to be no sign of improvement.

On Monday, spurred on by having watched the London Marathon on Sunday, I decided to run 8 miles - my longest distance since the Half Marathon 7 weeks ago (which was a rainy day too, by the way...). I didn't let the rain out me off, I put my baseball cap on to keep the rain off my glasses and face, and got out there. After spending over an hour in the great outdoors, naturally I was soaked by the time I got home, but it wasn't too bad.

Then this morning I crept downstairs at 6.20am while everyone else was asleep, only to see that it was pouring with rain and blowing a gale. I reluctantly put my running gear on - jacket and protective baseball cap included - and willed the sun to break out. It didn't, and I started to think of a few good reasons why I shouldn't go out. I'm not following a training plan, it doesn't matter how many times I run this week, I could run tomorrow instead, I'd be better off doing a fitness DVD in the living room etc etc.

Then I remembered something that I heard a couple of days ago. I was listening to the Marathon Training Academy podcast, and someone described how Angie, the show's presenter, doesn't miss runs she has planned because her mindset is 'It's already decided'. That resonated with me, because since January, going for an early morning run has been something that I've done almost every Wednesday. It fits in well with my usual weekly routine, and I've just got into the habit of doing it.

On Tuesday night before going to bed, I'd got my running stuff ready and set my alarm for the morning. It was already decided. So in spite of the constant blustery wind and horizontal rain, I toughed it out for 3 whole miles. I was cold, and it wasn't much fun, but it wasn't that bad either. And it didn't matter what the weather was like anyway - my run was already decided!
Posted by Liz at 21:23