Considering that there was NO SCHOOL for the whole of last month, it went pretty well. I managed to fit in more running than I'd hoped, and even a race. I didn't quite run as far as I would have liked with my long runs, but my weekly mileage was not too shabby considering.

I only managed 1 10-mile run, which was right at the start of the month, but my other long runs were 2x 7-milers and 1 8-miler. I'd like to get back to 10 miles and above in September, which will be easier with the kids at school!

I had a couple of great evening runs, when I really enjoyed running for fun in the evening sunshine, and it told in my speed. Both times I ended up going further and faster than planned because I was having so much fun.

When I was worried that I couldn't fit enough running in, I started doing my 30-day Shred DVD again (with Jillian Michaels). I last did it when I had the dodgy heel at the end of 2010, and I've been finding it pretty tough. I've enjoyed it though, and the kids can go and play upstairs for 30 minutes while I get on with it, so it's handy.

I didn't plan to do any races in August, but I ended up going to Parkrun on 18th, and ran 5K in 25m38. I think I was defrinitely hampered by some very hot weather.

I hardly touched my bike, because whenever I had some free time, I ran, but I'll get back to that soon I hope.

As well as looking after the children, my running was also limited by staying home and watching the Olympics, and then going to London to watch the Olympics! I went to London 3 times in all, and saw the Women's and Men's Marathons, the Women's Open Water Swim, and some Women's Basketball.

The weather has been pretty good here, especially compared with a lot of the UK, as we missed out on a lot of rain in the South East. I've really enjoyed the school holidays, and done a lot of fun things with the kids. The last couple of weeks we've been out for walks in the countryside, and had some fun at the beach. As I write this, Robbie is back at school for his first day in 'Year 2', and Emma will start next week. I'm really going to miss thme both, but I know they'll both be happy, and I'm looking forward to getting some great training in as I have a lot more spare time! 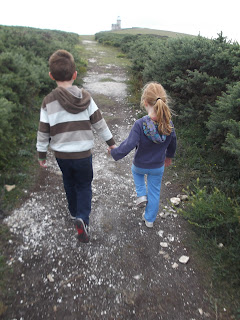