Yes I know Saturday was ages ago, but I've only just got around to blogging about it.

Last Friday after work, Pete and the kids had a quick dinner and then drove off to visit Pete's brother and family for the night. I could have gone with them, but there was a running event I wanted to attend on Saturday morning, and this gave Pete the chance to stay up late with his brother playing board games, as is their wont.

So this left me with not only the evening to myself, but most of Saturday as well!

I quickly decided that this was a great opportunity to get out on my bike at last - something I've hardly been able to do at all over the summer holidays. I also had some running I needed to fit in too, so I spent Friday evening planning how to make the best use of my time. 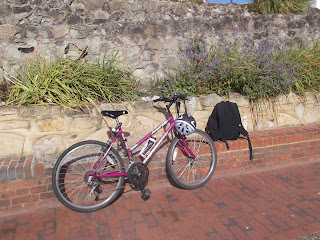 I got up early on Saturday morning, and cycled down to a nearby park. The first thing I wanted to do was run a mile, as fast as I could. This was instigated by having signed up the the Marathon Talk podcast's Magic Mile - a 1 mile running challenge. I had run out of time to get it done, so without much training or practice, I got off my bike at about 8.20am, and belted out a mile.

It was hard going, and seemed to go on forever, as I was really pushing myself. I had no target time, and no idea what to expect, but I did it in 7m08s. Later I checked how fast I'd run a mile last time I'd tried, over a year ago in July 2011. It was 7m26s, so yay - progress!

Anyway, after a few gasping minutes sitting on a bench, I slowly made my way to the start of the Parkrun race, which was on the other side of the same park. I wasn't planning to race after my all-out mile effort, but someone I know was completing her 100th Parkrun - quite an achievement, and I wanted to cheer her on.

I planned to jog round nice and easy, but the woman in question was aiming for a sub-27 minute PB, and that's not quite as relaxed a pace as I might have liked! I ran the last part of the race with her and her partner, and she got a PB, but we all finished in 27m04s.

Shortly afterwards, I got back on my bike. It was a pretty good day, nice and sunny. I cycled down to the town centre, and popped in a cafe for a second breakfast and a big latte. I was aware that I was very stinky after my exertions, but there was nothing I could do about it and no-one actually complained...

Then I wandered down to the seafront for a brief sit in the sun. It was lovely. 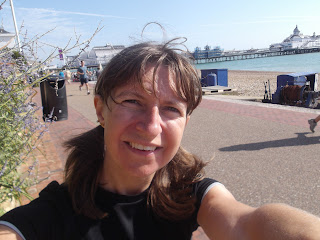 Then I got back on the bike and cycled along to another town on the coast. It was mostly on a busy main road, but there were some good views along there too. It was about 4 miles away and my legs were already feeling tired from the running! When I got to the beach, I pushed my bike across the pebbles and lay down for a little sunbathe. 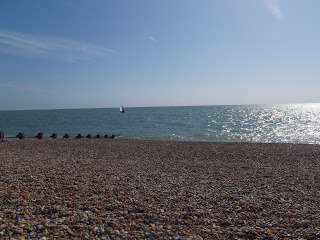 It was so quiet and peaceful. 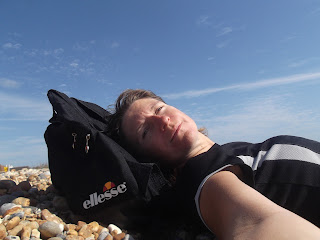 I locked up the bike and walked round to a local shop to get a drink and an ice cream. After refueling (pigging out), I slowly cycled the 5.5 miles home. It's an undulating route, and I've never found the uphills as tough as I did then - the 1 mile hard had taken more out of my legs than I had expected. 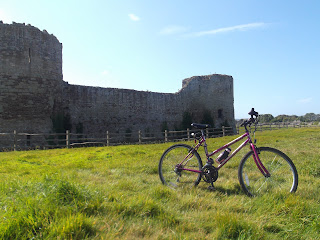 It's a picturesque route, cycling through the grounds of our local castle.

When I got home it was still only about 1.30pm, but I didn't have much energy left. I lazed around for a while, had a relaxing bath and did some baking for the others' return.

All in all I had run 4 miles, and cycled 17 miles. Not exactly record-breaking, but a great way to spend my me-time!
Posted by Liz at 21:47