It's been a while since I've run further than 10 miles - about 7 months in fact - so it was with some trepidation that I planned a 12-mile run on Monday. Recently I find that I really have to psyche myself up for a long run. I think this has something to do with the amount of time it takes out of my day as well as the toughness of actually running it, and I feel like there's something hanging over my head before I do it. On Monday though, I was kind of relishing the challenge.

I found a route that I last ran in February as my last long run before a Half Marathon, and it had been a horrible run. I'd really struggled. On Monday's run, I changed the route a little (because I forgot a bit of it), but it was very similar, and included one really big hill, and a few undulating roads.

Anyway, I quite enjoyed it. I felt good most of the way, until about 10 miles. Then I had to stop to change something on my ipod, and when I started again, my legs felt really heavy. Then some terrible noise came on in my earphones. Pete had added some Iron Maiden to my playlist as a so-called 'joke'. It wasn't so bad at first, it was fast at least, but it was a live recording and the singer started talking to the audience. It was soooo boring and went on FOREVER. I didn't want to stop again as I thought I might never get back running, so I turned the sound right down. That was greatly preferable. However, it may have been the case that the nightmare music made me run faster, as I was so desperate to get home and switch off. 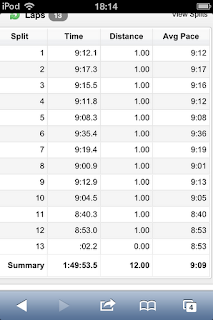 So I'm blaming that for the tough last 2 miles. I was delighted to have got those miles done though. The reason for the longer run was that I have a couple of races coming up. In fact I think I might have made a small error of judgement.

Ages ago I signed up for the Great South Run on 28th October. It's a 10-miler, and will in fact be my first 10 mile race. Then a few weeks ago after enjoying a 10K in Bexhill, I entered a Half Marathon in the same place. That race is on 11th November, which it turns out is only 2 weeks after the 10-miler.

Of course I should be able to run these distances comfortably, but I'm not sure I can race them both. As the GSR will be my first 10-miler, I'd like to get a good time, but the Half is my first since March's PB, and unlike that course, it should be pretty flat, so I'd like to aim for a good race there too.

Anyway, this also means juggling long training runs and tapers, so that run on Monday will be my last long run before both races. Next week I'll cut back leading up to the GSR race, and then I won't have time for a decent long run before the Half. Personally I find that a good taper is essential before a race, so I'm going to make sure I don't overdo it anywhere. No chance of that today, as I spent so long hoovering and tidying, I didn't have time for a bike ride. Oh well, I'm still basking in the smugness of having run 12 miles on Monday...!
Posted by Liz at 18:41