So on Sunday I'll be running my first ever 10-mile race, the Great South Run. It's in Portsmouth, which is about 65 miles from where we live, so we'll be driving over on Saturday. Pete's parents live nearby, and we're staying with them the night before the race.

As part of the Great Run series, this is a big race, 25,000 runners in fact. You can tell that this is a big event because it's live on National TV, it's expensive and gets full early,  there's a t-shirt for every finisher, and the race pack is rather large and detailed (including a magazine): 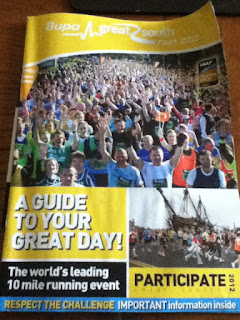 However, it's less than half the size of the Great North Run (a half-marathon) which I ran in 2010, and which consisted of 54,000 runners. It was an unsatisfying experience, partly because I hobbled round on an injured foot, and partly because it was just too big. The race was so crowded that it was often difficult to run at your own speed, and the congestion continued all the way to the finish.

I've heard that this race on Sunday could also be very congested in places, which is something I'm not looking forward to. However, the atmosphere should be good, there will be supporters all along the route, and it's supposed to be a scenic race, with the chance to view lots of local attractions.

So what time am I looking for? Well I'd like to get a decent time, as it's my first 10-miler. In March's Hlaf-marathon, I averaged 8.57 min/miles, so I'd hope for something similar or slightly faster here. However, the crowds may well hamper my 'speed'. I'm hoping that if I have to go slow at the start, I can pick it up in later miles. In addition, I've had a terrible week of sleep, culminating in being up for most of last night with Emma being sick! She kept throwing up, and is now off school for the day. I'm hoping she'll take a nap soon, and then I will too...

Anyway, I'll also have to wait and see what the weather is like, as it's a coastal route and could be very windy. Basically, I'm hoping to get under 90 minutes, and the the closer to 85 minutes I can get, the better.

Whatever time I run, I'm hoping to enjoy the atmosphere of a big race, and maybe spot some celebrities and elite runners. It'll be a PB anyway! I'm ready to enjoy my first 10-miler! 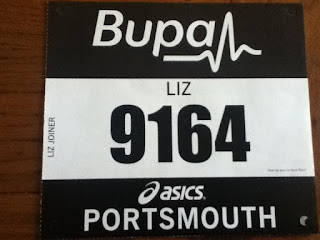