A couple of weeks ago it was the end of an era when my beloved old Garmin Forerunner 305 finally gave up the ghost and had to be replaced. Pete had bought it for me in December 2009 and it was invaluable as I trained for my first marathon the following May.

After the marathon I had got so used to it, it became unthinkable to go for a run or bike ride without the Garmin to accompany me. I like to record all my training and the Garmin is just the easiest and best way to do it.

Anyway, after a run 2 Sundays ago, I got home and the run data just wouldn't upload. Of course this was quite usual with my poor, aged, unreliable Garmin, but what was unusual was that I tried over and over again with no success, in fact it almost always stopped at 85% done. It was odd that it got to the exact same stage each time, and I began to see that something was wrong.

Then I found that it wouldn't turn on unless I did a 'hard reset'. This happened every time I tried. I still managed a couple of runs where it worked fine during the run, but I had to upload it manually. It seemed just a matter of time before it conked out altogether, so I started browsing online for a replacement.

A few days later, this arrived: 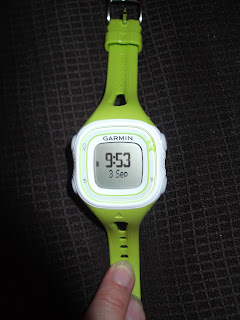 It's fab so far, and I love the way it looks.

Advantages of the FR10 over the old 305:
1. It uploads in about 5 seconds as opposed to 2 minutes.
2. So far, the computer recognises it when I plug it in and doesn't claim 'No devices found'.
3. It doesn't keep crashing the computer.
4. It sits happily in the cradle for uploading and recharging, so I don't have to (for example) balance a chair leg on it to hold it in position.
5. It's smaller and neater on my wrist.

Drawbacks:
1. It doesn't have a multi-sport mode. However, I can easily use it on a bike ride and change the info from 'run' to 'bike' on Garmin Connect when I've uploaded it.
2. You can only see a small amount of info at one time, so if I want to see my pace or what the time is, I have to push a button. Not a big deal.

There were lots of other functions that the old 305 had of course, but I never used any of them, so I won't miss them. I really just want something to measure pace and distance. And I like to see a wiggly line on a map of where I've been.

So, so far so good. There were so many problems with the 305, I just hope the 10 keeps working as efficiently and brilliantly as it has done up to now. 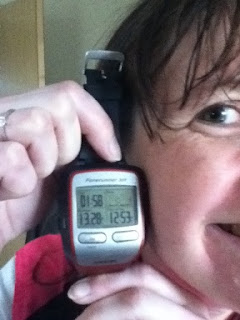