Despite it being the summer holidays and having most of my time taken up with entertaining the kids, I did actually manage to get a fair amount of running done in August. There was one week when I only ran 12 miles, but that was when we went camping, and spending each night lying awake in a tent with the kids left me too tired to run. Apart from that though, I did ok:

So I was pleased to keep the running ticking over last month. The 2 bike rides were both commutes to work as I went in for 2 Saturdays, and that's the only way I could get out on my bike recently.

Robbie and I ran 4 more parkruns which means he has now done 7 in total! He's still enjoying it, and on 10 th August, he ran a PB of 33m52s! I tried to push him a bit as we ran, and I think it was the promise of 2 pieces of cake if he beat his previous times, that really spurred him on. He's really not a competitive person at all, so I was surprised the following week when he asked if I could push him on again. The next 2 weeks he ran under 35 minutes, which was better than all his previous times of over 36 minutes.

Unfortunately I had to work last Saturday so we missed parkrun, but we're hoping to do the next 3 weeks, so he'll reach the milestone of 10 runs.

Now it's almost back to school time, and I'm kind of looking forward to getting back into a routine, and building up the miles. I've got a few races I'd like to do, so it'd be good to get stuck in again! 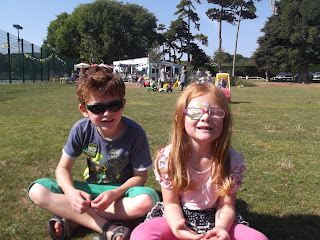