Over the last few weeks I started to feel right in the mood to do a race. The last one I did was at the end of June, which was starting to seem like far too long ago. So I did a bit of googling, and eventually signed up for a local 10K.

The Firle 10K last Sunday was an accompaniment to the main event of a Half marathon, and there was also a 5K. The 'running festival' was held in the grounds of a stately home, and was in the middle of the South Downs - our local range of chalk hills and cliffs.

This meant it would be a very scenic trail race with beautiful views, with an obvious drawback - hills! This was probably the hilliest race I've ever run, and perhaps the steepest and longest hill I've ever attempted to run up in a race. I say attempted because I ended up walking quite a bit of it. This was the evil elevation: 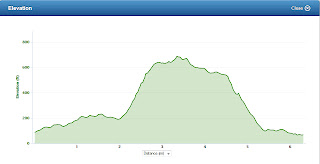 When we arrived, it was a really lovely sunny morning and the atmosphere was great. The Half marathoners set off 30 mins before us, and we 10k-ers had time to enjoy the warm sunshine and the pretty scenery before our race.

The race set off through the grounds of the home and was on a path at first. The path gradually became more gravel than concrete, and was tricky to run on in places. We ran out on to a road, and the climb began.

It was subtle at first - little ups and downs which were quite manageable. Then the hill got steeper and steeper. I kept running as much as I could, even when I was bent double and going slower than walking pace, I maintained the illusion of running. 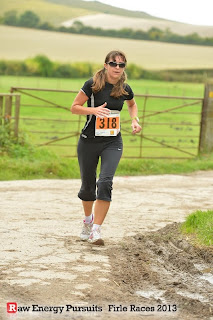 But eventually it got the better of me. That hill was STEEP and LONG. I started to walk, and once I had, it was very hard to get back running again. I walked all the way up the road until we reached a drinks station, and the grass on top of the cliffs. While some suckers stopped for water, I broke back into a shuffle, and started to pick off some of the people who had overtaken me.

But as the hill started to even out as we reached the top of the cliff, there was a new problem - WIND! It was very blustery up there and it was right in your face all the way along the top of the cliff. The views were great though - the sea to our left and the sprawling countryside to our right.

In the above picture, there's a woman in red and she was running with a clubmate in the same vest, and they had passed me on the way up the hill. As we ran along the top of the cliff, I was getting closer and closer to them. Another woman in purple caught me up and we ran together through a field of cows. They were all sitting down and we had to run right past them up close, it was a bit scary.

At the end of that field there was a gate which we had to open, and the 2 women in red, the purple one, and me all went through it together. Just after that - finally - it was DOWNHILL time! I was desperate to make up for the time I'd lost walking, so I absolutely threw myself down the hill. Within a few metres I was way ahead of the purple woman and one of the women in red. At this stage half-marathoners were catching us up too, so I kept hearing footsteps behind me, which made
me keep speeding!

I really went for it down that hill, and I'm just glad I didn't fall down it. It was punishing on my legs, and when we got to the bottom, I realised how tired they were.

One of the red women was in front of me, but suddenly she stopped and waited for her clubmate, shouting encouragement. As I ran round the muddy paths back into the grounds where we'd started, I knew they were behind me but I didn't know how close. I tried to put on a burst of speed, but for once my legs did not respond! They were completely knackered!

As I turned a corner towards the finish shute, I saw Pete and the kids waving and shouting at me. At this point I tried to sprint for the finish, and while it wasn't much of a sprint, I did manage to accelerate a bit. I beat the women in red as you can see above, but the faster one probably would have beaten me if she hadn't waited for her friend. 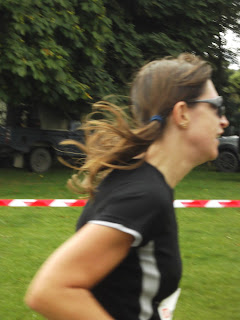 As I ran past, Pete got a photo that makes me look fast. Trick photography!

At the finish there was a canvas bag, a voucher for a local running shop, a medal and a cup of tea - lovely! It was a really well organised event, and the official results were out that evening. I came 46/99 runners; 8/51 women and 5/21 vet women. My time was 59m06s (slowest 10K since my first one in 2009), but the time is irrelevant really as it was so hilly. I'm really happy with 8th female, although I think I could have stopped walking and started running sooner on the hill!

We were lucky with the weather (the black clouds were gathering as we left and it rained in the afternoon), and it was a really well-organised event. I would probably do it again, but I might need a bit of hill-training first!
Posted by Liz at 21:36