Well the kids have now been back at school for 2 1/2 weeks and I've been at work for 2 weeks, so we are right back into the swing of things. Last week I had to finish writing some exam questions for another job as well as my teaching, and then I was asked to cover a class on Friday too.

This meant that something had to give, and yet again it was a planned bike ride. Although Monday was a day off, I spent the whole day writing on the laptop at home, only interrupted by the joy of food shopping - yay.  Then on Friday the weather was lovely and sunny, and would have been a great morning for cycling, but I could only look out of a classroom window and sigh...

But I managed to get loads of running in instead. On Tuesday I had a great long run of 8 miles - my longest distance for months. It was fine weather, and I really enjoyed the run. This was despite my thighs burning from Sunday's 10K. I was never sure if the agony of DOMS was from running uphill or the lethal downhill.

Anyway, it was a relaxed enjoyable run, and as I was plodding along, I suddenly realised how nice it looked. I was just running through a housing estate, and there is a big hill in the background which I've just got used to seeing all the time. It just dawned on me how pretty it was so I stopped and took a photo! 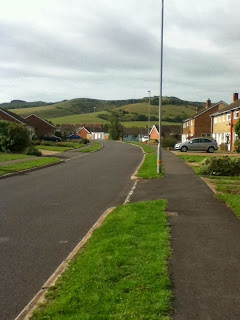 Then on Saturday it was Robbie's 10th parkrun! As a junior, this means he will now receive a free t-shirt, and it's a little landmark in his running. Pete and Emma volunteered as marshals for the occasion, and we ran past them just before 2K, which was fun. Robbie was quite tired - he'd had PE and then swimming after school on Friday, and he was running around before the run started.

There was a another boy who looked a bit older than Robbie, and he was in front of us for he first half, then kept stopping to walk. Everytime we caught up, he started running again, as if he didn't want to be beaten. I hoped Robbie could beat him by running the whole thing, but Robbie just seemed totally oblivious! He just enjoys himself and doesn't worry too much about who's behind or in front of us, which is a great attitude really.

Anyway, we eventually passed the other boy with our slowly but surely approach, and Robbie told me at the end that he was glad he beat him, so perhaps there's a little competitive spirit in him after all!

It was a really nice run as lots of other runners and marshals really cheered Robbie on, saying things like 'Well done young man!'. A few regulars spoke to us at the end and congratulated Robbie, and I felt a real sense of community and friendliness.

I was hoping that I might get a chance to run one at my own speed soon, (all under 11-year-olds must be accompanied by an adult), but Robbie seems to want to carry on doing parkruns and I'm certainly not going to stop him! It's just great that he's so keen.

Despite it being a busy week, I ran 22 miles in total, which is my biggest for a while. It's about time I did some more focused training. Next week is going to be really busy too though, including a friend's birthday party, and then Robbie's birthday on Friday. I'll be trying to fit in a bike ride, and plenty of quality running...
Posted by Liz at 19:37