A Magic Mile and runs with the kids

I've been a listener to the Marathon Talk podcast for a few years now, and every year around September, they have a Magic Mile contest. The idea is to train for and then record 1 mile as fast as you can run. There are no prizes and the competition is just there to motivate you - it's all about fulfilling your own potential.

The first time I tried this was 2 years ago, when I recorded 1 mile in 7m26s, then last year I managed 7m08s. This year I wasn't really expecting to go any faster, as I haven't done any speed training for ages. I've been running quite sluggishly and not enough, and all my shortest runs have been at Robbie's pace - a good 2-3 mins per mile slower than my fast pace.

But I just had to have a go, so last Thursday (the last day of our lovely summer, it turned out), I jogged to a local park. It was really hot and there was no shade in the park, but at least it was more or less empty of people. I started my Garmin and ran as hard as I could.

All the time I was mentally rehearsing my excuses for running slowly - it was hot, I hadn't trained, I'd jogged too far as a warm-up, I was on grass etc. But I kept going and when my Garmin beeped and I stopped it, I couldn't believe it - 6m56s!!! I never thought I'd go under 7 minutes so I was delighted. I was on a high all day after that! Now I'm wondering what I could do on a track with some training...

On the following Saturday it was parkrun as usual, and this was Robbie's 8th. Due to a fair being set up for later that day in the park, the route was a different one - an out and back run on the path. This is also known as the PB route, as there are no sharp turns or muddy grass banks to negotiate. It was also much cooler, as summer had begun to disappear by then - sigh. 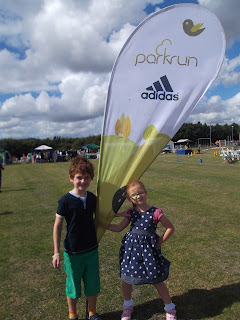 Then we found out that at the fair later that day, there would be a 'Junior parkrun' which was only about 1km. Emma is always wanting to join in our runs, but at 5 years old, she's a bit young for the full 5K. (She also often moans that she is tired when we walk 0.5 miles to school...) So at lunchtime we were back in the park ready to run again.

It turned out that it was really for children aged about 9-11, but they said Emma could run if I ran with her. I was wearing jeans and normal shoes, but at least they let me leave my handbag behind for the race! It was pretty funny - a group of older boys sped off and then all stopped and walked after a couple of minutes. Robbie ran his second parkrun in one day, and Emma managed to run the whole thing without stopping to walk - unlike the 11-year-old boys!

It was just a shame the event hadn't been publicised - I'm sure a lot of kids whose families are usually at parkrun would have come if they'd known in advance. I'm glad Robbie and Emma see running as fun, and something they still want to do - proud of them as usual!
Posted by Liz at 19:10