So after 6 weeks of virtually no exercise, I have finally got back into it! Since Monday I have managed 2 bike rides and 2 visits to the gym, with a little swimming with the kids thrown in for fun.

This was a great week to join the gym, as the weather has been rubbish. From Wednesday onwards we had gales and rain - not a winning combination. So on my free mornings of Weds and Fri, I was delighted to leave the bike in the shed, drive to the gym and work out indoors. On Friday I did 5k on the cross trainer, which felt like an ok substitute for running. The time was fairly similar to what I would run it in too. Then I had a bit of instruction on using the weight machines. It was quite good fun. I left the foam rollers alone this time though.

Yesterday the weather was better - it was still windy, but I believe I actually spotted a ray of sunshine at one point! Robbie is now having swimming lessons on a Saturday morning, so we headed off to the pool. The rest of us swam in the main pool while he had his lesson, and then he joined us afterwards. He's doing really well, I think. He doesn't have much in the way of technique yet (sadly neither do I), but last week he swam 4 lengths! He stopped for a rest in between each one, but still, I couldn't believe it. Soon my 5-year-old will be a better swimmer than me.

This morning the wind had finally died down, but it was pouring with rain. Nevertheless, I wrapped up warm and got my bike out. I really didn't feel like cycling in the rain - for some reason I think it's worse than running in the rain, which I quite like. I just seem to get wetter on the bike. Anyway, I was glad I did of course, and completed nearly 8 miles in 51 mins. 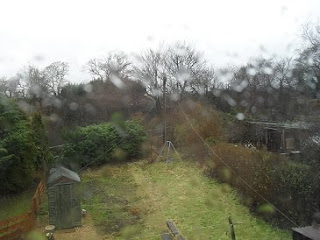 Ms Physio has advised me to build my workouts up gradually again, so I'm trying not to leap back into things full throttle. Next week I hope I'll be able to do a bit more - time depending of course... But I'm happy to have had a fairly good start to my own New Year - starting in February!
Posted by Liz at 19:25