It's half term this week so we've been looking for things to do together, and while browsing local activities, I read about an orienteering day in our town. It was last Saturday in the grounds of a country estate, and suitable for familes as well as serious competitors. As luck would have it, we had a sunny morning for a change, so after Robbie's swimming lesson and lunch, we headed off. 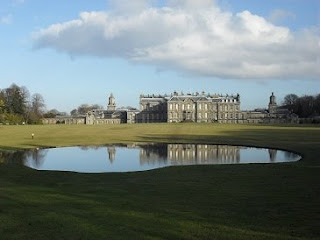 We've never been orienteering before, and I didn't know anything about it, so we were a bit unsure what to expect. When we arrived, there were a lot of cars and a long queue of people collecting maps and 'dibbers'. Apparently the organisers were a bit overwhelmed by the number of people, presumably due to us all being desperate to get out in the first bit of sun we'd seen for months.

We decided to do the shortest and easiest course, whcih was less than 2km long. We were given a map with 10 checkpoints on it, which we had to find in the correct order, and punch the dibber into an electronic device at each one. At the end of the course we would get a printout with our time and position on. 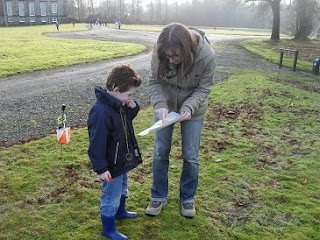 It was so fun. Robbie was in charge of the dibber, and he got really excited about looking for the checkpoints. Every time he saw one he would shout out triumphantly and run off towards it. We kept stopping to check the map, and even a compass, but in fact the course was really a case of following a footpath round the grounds. Next time we would do a longer and slightly more difficult course. 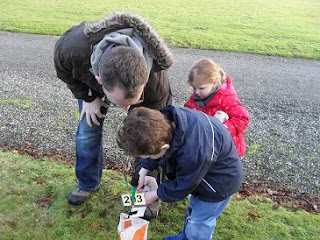 Punching in at a checkpoint

In fact we're thinking of doing another one this weekend - depending on the weather. I've been told about orienteering before as a way of combining running and kids, and although I wasn't running this one of course, I would definitely recommend it as a great way of getting the kids running about in the fresh air. 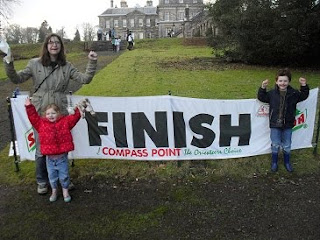 Naturally the sun didn't last long, and by the time we finished, it had clouded over and was spitting with rain. I have never been more ready for Spring!
Posted by Liz at 16:44